Share All sharing options for: Practice? News and Notes from Hoyas Open Practice

Saturday was open practice day on the Hilltop for the Georgetown men's basketball team. Before that blessed event, fans had the chance to get autographs and ask head coach John Thompson III questions. The last part is where I come in. There was no formal Q&A with the media -- on this day that meant entirely yours truly -- but my recorder was running and notes were taken. The highlights, but first...

(Just a quick interlude to say I'm going to contribute on CasualHoya.com this season. Some of you may know I've covered the Hoyas for several years (10?) and most recently for CSN. While I'll still have a byline at CSN, they're largely moving away from college basketball coverage. That left me without a home for hoops. Options were pondered. The result of that pondering plus several conversations later with the man behind Casual Hoya and enticements like unlimited Casual headbands brought me here. Neat and many thanks. No idea what happens next, but we have a few weeks to figure it out just like JTIII has time to figure out a player rotation he'll never confirm exists on the record even after 20 games. Good times. Now, about that missing Kente...)

* Just like you, Thompson was miserable last season. 15-18 overall and 7-11 in the Big East is no bueno. "Last year hurt," the coach told the crowd inside the O'Donovan Hall before shifting the discussion toward a hopeful 2016-17.

* Thompson mentioned a reason for those struggles on both ends of the court: "Last season's team, to be honest, was a very unathletic team." He's not wrong. That led to a slower pace and defensive woes. "Our focal point has been our defense. Everybody likes to talk about our offense," the former Princeton baller said. "Will there be changes? Yes, but at the end of the day, I think our defense let us down as much as anything last year." Again, he's not wrong.

* Let's not overlook the notion of making changes with the offense. Thompson isn't abandoning his get-a-good-shot roots, but look for more push simply based on the point guard change alone. As great as D'Vauntes Smith-Rivera was during his four seasons, he needed a slow pace, Thompson reconfirmed to the group. JUCO transfer Jonathan Mulmore, not so much.

Infusing Mulmore, graduate transfer Rodney Pryor, freshman Jagan Mosely and big man Akoy Agau, who missed last season with an injury, into the returning core of L.J. Peak, Isaac Copeland and Kaleb Johnson gives JT3 one of his most athletic rosters since he's been at Georgetown.

* Thompson passed on revealing the starting lineup. He joke blamed the media's presence as the reason why. Adorable. Make me guess right now and when all are available I'd say Mulmore and Pryor in the backcourt, Bradley Hayes at center, Copeland at one forward spot and...Peak. The only hesitancy stems from his star-turn in the sixth man role last season. Other than the plodding Hayes, that's one athletic group.

* Not everyone was set to practice in full Saturday

Derrickson and Hayes were allowed to work on some drills while Johnson was ruled out altogether, Thompson added.

* Derrickson also "twisted his knee" while inadvertently stepping on a basketball in the middle of a play during Kenner League this summer. "We were extra cautious with that (injury)," Thompson said. "He plays so hard and he gives it his all, but he keeps getting these little injuries." Expect a more tone version of the multi-faceted forward including a dribble-drive element not on display last season.

Pics below courtesy of @HaydenMac: 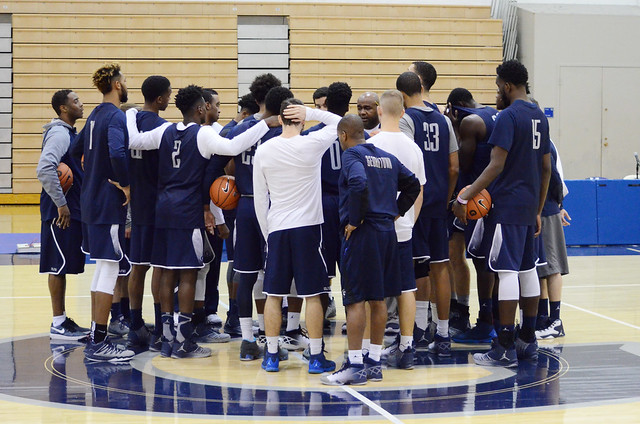