@NationWideNolan takes you to school on Georgetown's top point guard.

As the Georgetown Hoyas continue their search for guards in the recruiting class of 2016, it's up to a returning contributor to take a step forward and make a jump from spark-plug to steady contributor. Tre Campbell's freshman campaign was largely a positive as he entered with questions about his size and strength hindering his ability to make an instant impact. Campbell acclimated himself well - averaging 14 minutes a game and proving to be a threat from long range with a steady handle and the fastest straight line speed on the roster.

Georgetown returned to more of the princeton offense that Hoyas fans have been accustom to throughout the JTIII era in the 2014-2015 campaign. With the continued strength of the team being in versatile forwards and hopefully a low scoring post (Jessie Govan) it will perhaps even enhance Campbell's game. To date, not the most creative ball-handler or distributor, Campbell fits well in the Georgetown system that doesn't rely on much play-making from the lead guard spot. Where it appears Campbell can shine is pushing the ball north to south in transition and shooting the three ball in the framework of Princeton offense sets. 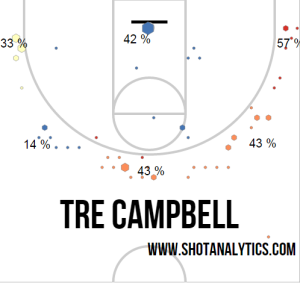 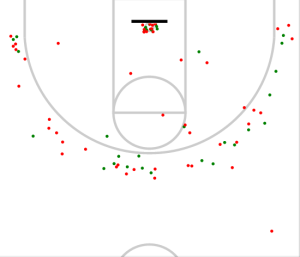 As you can see, Campbell made his mark from behind the 3pt line above the break. This is where the Princeton offense suits his skill set. While 21-58 from 3 is not a great sample size, that production coupled with solid mechanics lends itself to the belief Campbell will eventually be a 38-40% 3PT shooter before his career is over. Where Campbell enhances things is his quick release - in point screen away and point over the top action (see here for better understanding) or against zone - all Campbell will need is a split second. Campbell also exhibited unexpected range on his jumper, taking shots a step or two beyond the 3pt line, the more space that can be generated, all the better.

Take a look at this one, easily NBA range:

If Georgetown's backcourt was a football backfield, Campbell is the change of pace to D'Vauntes Smith-Rivera's 20 carry a game in-between-the-tackles steadiness. Campbell is always moving with purpose and with a more prominent role, you might see a Georgetown point guard getting north to south.

Campbell also displayed a good burst coming off of screens and an ever important pull up jumper:

Even here where the shot is blocked, Campbell is showing ability to turn the corner and put pressure on the defense. I'll live with the rejection. But these next clips show the development to be hoped for. Attack and put pressure on.

Campbell's decisiveness was rare for a freshman point guard, and in my opinion helped his ball security. He didn't think. He played. Campbell's turnover rate of 10.6% was the lowest on the team. While that isn't sustainable it does provide optimism that Campbell is going to be in control during his Hoya career. It perhaps is a benefit that Campbell is not all that quick laterally as he is moving north-south, at least on the offensive end - there's no wasted motion. It's difficult to find many weaknesses that Campbell displayed offensively during his freshman season. Natural progression with strength and athleticism needs to be made, but outside of that? He shot the ball well, protected the ball and added a jolt of offense in key spots. Not much else could have been asked. As his career unfolds we will see if Campbell is simply a scorer and shooter out of the guard spot or if he can truly create for others. Not much is ever asked in terms of creation out of Georgetown guards but it's an added element that can add wrinkles to the offensive system.

Where I found trouble in Campbell's game was on the defensive end. I assume the coaching staff had similar concerns as his offense warranted more playing time than he received. Campbell struggled to stay in front of opposing guards, got lost in ball screens and could be overwhelmed physically when running into one. In an interesting tactic - JTIII generally had Campbell pick up full court and often was a pest doing so. Campbell's effort shouldn't be put into question but defending in the half court must improve. It is unlikely that if Campbell shares the floor with Smith-Rivera (who will play a ton) that Georgetown plays zone, therefore he has to be able to guard on-ball.

Georgetown's pick and roll coverage is often fairly vanilla (not a bad thing). A soft hedge and recover - it became a bit more conservative with Josh Smith but it's likely to remain the same as it has historically with Jessie Govan- unless Akoy Agau and Trey Mourning give it some juice and JTIII elects to trap or string things out. But, where Campbell can't fail is getting burned by a screen, either by running into it or taking an elongated route. This compromises the entire defense as the post player is looking to recover and expects his guard to fight through the screen quickly. Campbell has a bad habit of becoming detached and taking longer routes than necessary to recover. Increased strength will improve Campbell ability to fight through screens. And it also raises the question if the Georgetown staff looks to hedge harder with their bigs and have Campbell go under screens instead of trying to fight over the top.

What you especially don't want to see is giving up on a play - Campbell should be active at all times and has quick enough hands to disrupt plays that he gets back in on but you have to give yourself a chance:

While I do buy into the 'no freshman is ready to defend' narrative a bit, Campbell was pretty bad. LJ Peak was darn good, Paul White was above average and Isaac Copeland was adequate once his feet were wet. There are no real metrics to judge individual defense but Campbell's defensive rating being 2 points worse (106.7) than any teammate's during Big East play is at least a bit telling. I was miffed by why he hadn't received more minutes this past season but it became more apparent after taking a closer look.

Campbell should at least push for a starting job and the possibility of a three guard look with DSR and LJ Peak. Based on history, I would expect JTIII to go bigger (Paul White) and preserve his other ball-handling guard as a 6th man. Which is a role where Campbell should thrive. His offensive punch is apparent and if he can make strides defensively, he's going to be a real asset this year and beyond. As we all panic over Curt Jones, Bruce Brown and Seventh Woods - it is worth noting that every full-time PG under JTIII has developed into an All-League caliber performer. Wallace, Wright, Starks, DSR. That's not a bad quartet over 11 years. There's plenty of optimism to believe the next in-line is already in the program and not in his senior year of high-school.