@NationWideNolan on everything you need to know about Georgetown's best player.

D'Vauntes Smith-Rivera is an elite college guard on the offensive end. Sure, there are limitations physically but DSR checks out as above average to elite in too many offensive categories to brush him off as a product of Georgetown's system. DSR ranked 1st in the Big East in: Win Shares, Offensive Win Shares and Offensive Rating. DSR also checked in at 7th in Player Efficiency Rating during the 2014-2015 season. In the JTIII era, only Jonathan Wallace in 2008 (121.8, playing off of Roy Hibbert) had a higher offensive rating than DSR the past two seasons (120.6 in '14, 120.8 in '15). 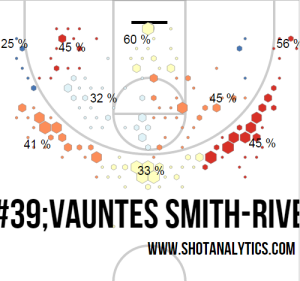 DSR's shot making ability is well known - and the above chart displays that he has virtually no weaknesses playing out of the hybrid Princeton offense that Georgetown employs. His shots come mostly from 3pt range - 49.9% of DSR's total field goal attempts came from 3 point range. DSR is rock solid with his mechanics on his jumper. Every release (given an opening) is the same:

His release is not the quickest but certainly isn't a hindrance:

It sure felt like DSR was pressing a bit early on last year on when to shoot, when to pass and overall how to fit into being a full-time point guard. (thoughts of NBA?) He did eventually settle in to his role and shot the ball better late:

If DSR didn't shoot as poorly early on, the Kansas game is almost certainly a win and possibly the game against Butler in the Bahamas. If there's a concern with DSR, it's this. He tries to press while trying to prove something. There is little doubt that the NBA (or Europe) is on his mind, DSR has to recognize that he can't force the issue and can't be someone who he is not - and he did this exceptionally well throughout the meat of the Big East season last year. We all know what DSR is at this point. Fairly high volume, highly efficient shooter that limits mistakes. He's not getting taller or more explosive, and a breakthrough improvement to another level shouldn't be expected. But small, incremental improvements are the hope - and getting a totally flushed out finished product - which I believe DSR became during January and February last season is the goal.

Where DSR walked a fine line last year was finding a good shot - and the value of a good or great shooter taking a bad shot. To his credit, DSR is already a selective shooter and offensive player in general, but with more talent around him this year there are a few shots he should turn down:

But make no mistake, that is a difficult line in the sand to draw with a player who can and has made difficult shots. And let's be honest about it, the Georgetown offense is known to stagnate from time to time. Having a player like DSR who can bail you out is a luxury at times:

It's hard to imagine that he doesn't have a fairly green light from JTIII this season. With that trust, he has to make the right decisions. Sometimes it will be being a bit selfish, and at other times - run the offense. It's a make or miss game and with a player whose game is centered around shooting the ball well - it's more prevalent with DSR than most. You hope that DSR isn't cold often but with the 2015-2016 Hoyas there should be enough offensive punch to offset a cold night, which has plagued the program in his first three years:

The big question surrounding DSR last year was if he could handle the responsibilities of being a full time lead guard. While DSR still didn't create for teammates at a high rate (not many PG's will in this offense) he did take care of the ball extremely well. DSR only had a turnover rate of 12.6%, second best on the team and led the Big East among starting point guards:

DSR isn't asked to put as much pressure on defenses off the bounce or operate in as many pick and rolls as other point guards but his ability to limit turnovers should not be taken for granted. If there was a next step that he's looking to make offensively, it can be by putting more pressure on defenses with his dribble. DSR possesses a nice hesitation game, it's difficult for a defender to speed him up - he goes at his own pace:

I want to see DSR get his foot in the paint and take that one extra step to help draw a defender or look to score. Again, it's hard to criticize anyone for limiting turnovers and mistakes but sometimes DSR lets some openings pass by. With the reduced shot clock, it may be worth it to turn up the aggressiveness:

One more step here with a 7FT'er on you and you might free up a wide open look for Paul White:

Your shot may not be the one that gets created or even the 2nd option (the roll man here) but by probing it opens up other things:

Also in the full court, opportunity to push into a 3 on 2 isn't taken:

Creates his own numbers here by pushing:

If the early season schedule wasn't such a challenge, I'd almost hope for a DSR experiment early on to see how aggressive he can be as a playmaker and the results that are produced. That likely won't happen and I'll gladly sign up for the January-March version of DSR we had in 2015. We should be looking for a player who has near mastery of the offense and minor adjustments - turning down a shot here, taking the ball a step further here- can make for a better offense.

On the other side, DSR has held up better than most had thought coming out of high school. There were fractions of the Georgtown fan-base who would have passed on DSR due to size and ability defensively, and that seems awfully silly now. He doesn't take the toughest perimeter assignment (Peak or Trawick last year, almost certainly Peak this year), he offers little length to disrupt offensive teams or individual players - but there is something to be said for being in the right spot and DSR often is. Not to mention his ability to help out on the defensive glass, which he's done better than any Hoya guard since Jessie Sapp. All you want from a senior is simple - do your job. Help when help is needed and follow the scouting report. The only tweak I'd make is that I'd like to see DSR go under more screens this year. It won't be an option against a team like Maryland and Melo Trimble but against most of the schedule I think it's the way to go.

Without great recovery speed or length, DSR simply has to be on his P's and Q's at all times defensively. Once again, as a senior you hope that to be the case.

All totaled, you're looking at one of only 10 players in Division 1 that are returning who averaged at least 16 points, 4 rebounds and 3 assists. With a 500 point season (almost a lock), DSR will turn into Georgetown's 5th All-Time leading scorer and will finish either 1st or 2nd in All-Time three pointers made. DSR has had a game that you can often take for granted, there's nothing sexy about it, it offers few highlights and it is not pulling you out of your seat. But the meat and potatoes of his game produce results and will continue to do so. This isn't Iverson. Or Sleepy Floyd. Maybe not even Charles Smith. But don't take it for granted this year. This isn't a product of the system, this a guy who is damn good.

Others in the epic Film Room Series: