A simple act by ESPN announcer Dan Dakich is the turning point of Georgetown's season.

Share All sharing options for: A Love Story: Dan Dakich and Casual Hoya

The history of ESPN announcer Dan Dakich's relationship with THE GLOBAL PHENOMENON dates back to October 24, 2013, the day that the NCAA granted Georgetown center Josh Smith's waiver to be eligible to play immediately for the Hoyas. Though the Hoyas fanbase at the time was rightfully gleeful, while other media talking heads questioned the NCAA's decision to the grant the waiver, Dakich took to twitter to criticize Smith himself:

Is the NCAA good or bad for letting the most disrespectful player I've ever seen Josh Smith be immediately eligible at Georgetown?

That tweet set off a firestorm between Dakich and a number of Hoyas fans, who questioned why an ESPN announcer who has never met Smith would use a public forum like Twitter to go after him. The tweets went back and forth, and after the dust settled, days turned into months without the topic being broached again.

Then, after Smith's suspension for academic reasons was announced in January and Georgetown fans began to question whether a season with such promise was headed towards the nearest dumpster fire, Dakich emerged from the wreckage, firing off a tweet directed solely at THE GLOBAL PHENOMENON.

And, after not getting a response to that one, he struck again:

Our response was simple and contained a timely meme featuring "Sad Scott", the face of the 2013-14 Georgetown Hoyas season:

.@dandakich If you're looking for an affirmation of your attack on Josh Smith, you're not going to get it from me. 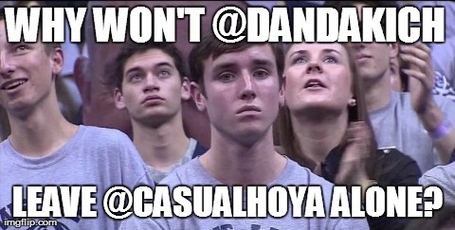 Not one to let a Georgetown Hoyas basketball blog have the final word on the topic, Dakich then responded:

Me, a lawyer who in his increasingly vanishing spare time happens to support the Georgetown fanbase at his fingertips, now branded a typical media guy! Awesome! All of my dreams had come true!

Once again, the initial wave of Twitter hate subsided and tensions between Dakich and THE GLOBAL PHENOMENON began to cool.

When the Hoyas were selected to play in the NIT and I received word that the game would be broadcast on ESPN and announced by Dakich, it almost seemed too good to be true. Dakich was coming to historic McDonough Arena on Georgetown's campus to face the wrath of a Hoyas fanbase he had riled up just months prior. Oh, what venom he would face from a student body known for being creative enough to produce enormous heads of famous people like Bradley Cooper and The Pope! Surely Dakich would never hear the end of it for the entirety of the two hour broadcast! We were finally going to get our revenge!

And then this happened, courtesy of Georgetown Sports Information Director extraordinaire Mex Carey: 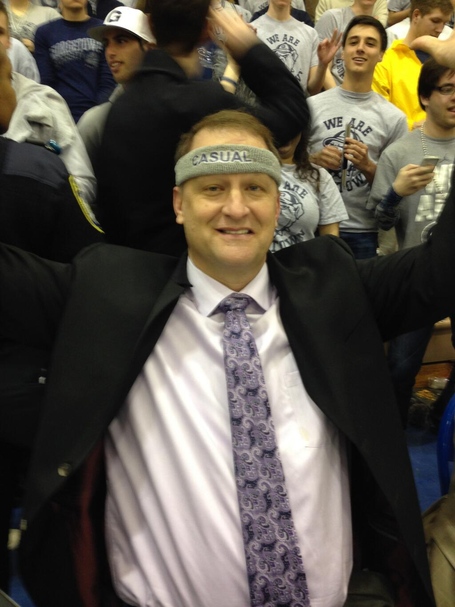 And all has been forgiven.