Everything you need to know about "CXV"!

In 2009, Casual Hoya was launched and helped revolutionize Georgetown Hoyas fandom across the internet and throughout the universe.

In 2013, The Stonewalls alumni group was formed to help turn the Verizon Center into a true homecourt advantage.

In 2014, the two forces will meet and host a party for ONE NIGHT DAY ONLY.

WHAT THE HELL IS A CASUAL EXTRAVAGANZA?

Good first question. A Casual Extravaganza is a party thrown by a blog. Sound fun?

UM, NOT REALLY. WHAT HAPPENS AT THESE EXTRAVAGANZAS?

Here is a quick recap of previous Extravaganzas:

CXI: Casual headbands were used in the most unconventional of ways (not fit for print), and after six hours of drinking, one blog dork informed his bestest blog friends that he recently knocked up his wife - leading to not one, but TWO shout-outs from the bar DJ. There were Kelly Clarkson songs and there was dancing. I don't remember the rest. Neither does anyone else.

CXII: Casualties went through 14.5 kegs of Bud Light at the Iron Horse. There was much joy and revelry, and no one fell down the stairs. I don't remember the rest. Neither does anyone else.

CXIII: Casualties rejoiced after a satisfying shellacking of Villanova and some idiots waited on lines for 30 minutes at the Iron Horse just to get a chance to meet and great their fellow blog buddies. "Don't Stop Believing" was played a few times and the DC Slices food truck was parked outside to satiate the masses. There were body shots and someone might have fallen down the stairs, but that's not my problem. I don't remember the rest. Neither does anyone else.

CXIV: Casualties descended upon the Extravaganza at the Iron Horse in record numbers after the Hoyas vanquished former Big East rival Syracuse to clinch the Big East regular season title. There was CasuALE, god bless that CasuALE, and there were name-tags so blog dorks could identify one another. The first blog makeout session occurred and there was much revelry and rejoicing. I don't remember the rest. Neither does anyone else.

OK, THIS SEEMS LIKE IT COULD BE CASUAL AND FRANKLY MY FRIENDS AND I HAVE NOTHING BETTER TO DO AFTER THE GAME. WHERE AND WHEN IS THIS THING TAKING PLACE THIS YEAR?

Nice! Well, this year's Casual Extravaganza is taking place at Penn Social, a bar right near the Verizon Center! Head on over after the game!

WHY PENN SOCIAL? DON'T YOU GUYS ALWAYS DO THIS AT THE IRON HORSE?

YEAH BUT SINCE YOU GUYS ARE A GLOBAL PHENOMENON AND HAVE SO MANY FANS AND ARE THE BEST SITE ON THE ENTIRE INTERNET, THE LINE AT THE EXTRAVAGANZAS HAVE TRADITIONALLY BEEN CRUSHINGLY BURDENSOME AND TERRIBLE. CAN I GET IN?

Yes! Yes you can! And thank you! The good news is that Penn Social shouldn't be a complete shitshow. Bigger space, more efficient ingress and egress.

DID YOU JUST USE THE WORDS INGRESS AND EGRESS? YOU ARE SUCH A DORK.

Why yes! Yes there are!

NOT BAD, BUT WILL THERE BE ANY CASUAL FREEBIES OR HANDOUTS?

Does the Pope go to Church? Does Michael Carter-Williams go to Lord & Taylor? There will be Casual Headbands. 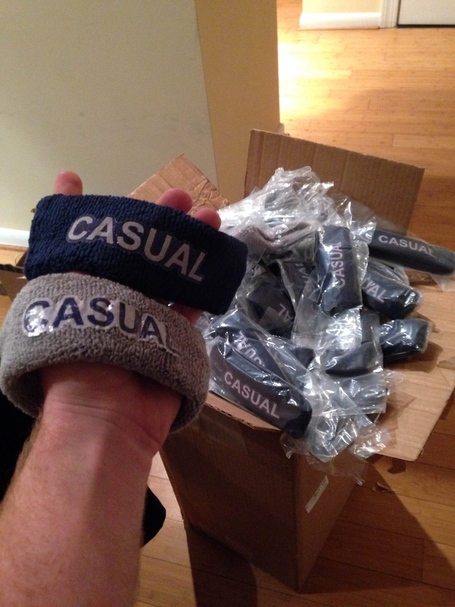 THOSE THINGS ARE KIND OF CHEAP-LOOKING. WILL I BE ABLE TO GET A STONEWALLS SCARF INSTEAD?

Look, you get what you pay for and those headbands are free (for you, at least). There will be Stonewalls scarves, but you'll have to pay for those because those guys love Georgetown but hate America.

SO, IS IT JUST GOING TO BE A BUNCH OF BLOG DORKS AND STONEWALLS PEOPLE?

No! Casual Hoya and The Stonewalls have proudly teamed up with the HOYA HOOP CLUB for this event! So, in addition to all of the wonders listed above, you can also find Hoop Club people wandering around so you can donate to the program, get the damn IAC finally built and help prevent us from becoming DePaul!

BUT WAIT, THE TEAM ISN'T THAT GOOD THIS YEAR DOESN'T THAT MEAN THE PARTY MAY NOT BE AS FUN?

I would argue just the opposite. I mean, sure, beating Syracuse and celebrating is fun, but in my experience nothing creates a more degenerate day of drinking and poor decision-making than a strong helping of self-loathing mixed in with a dash of cynicism and then topped with a light dusting of delusion.

WHAT WILL THE RECAP FOR THIS YEAR'S EXTRAVAGANZA CONTAIN IN NEXT YEAR'S WRITE-UP?

You make the memories, I just blog' em.

CAN I STILL COME IF I'M NOT A GEORGETOWN FAN?

Excellent, see you there.

The Casualties. The Stonewalls. The Hoya Hoop Club.

WHAT COULD POSSIBLY GO WRONG?!?!?

See you at Penn Social, everyone!

WOW! IS KATE UPTON REALLY GOING TO BE THERE?