Sleeping with the Enemy: The Musketeers of Xavier

Share All sharing options for: Sleeping with the Enemy: The Musketeers of Xavier

Your Fighting Hoyas of Georgetown limp into Verizon to take on Big East virgin Xavier and as usual we here at THE GLOBAL PHENOMENON are bringing you everything you need to know about Georgetown's next opponent. Here to eXpound on all things Xavier are our new best friends at Banners on the Parkway, your source for all things Xavier on the internet. Let's do this!

The Hoyas blew a massive 2nd half lead in our first meeting. Please detail your reaction watching this game, through the 1st half butt-whipping through the 2nd half heroics.

I was at church during the game while Banners co-owner Joel D ran the ship. At halftime I was pondering what life decisions had led me to a place where I was willingly putting myself through something that was making me so miserable. I had spent the whole day looking forward to the game, and here they were, gutting me. I pouted on the couch right until James Farr said "three points, baby" as he launched a shot. I knew we had it right then, even though that cut the lead to nine. From then on, it felt like riding a wave. Just a great game to be on this side of. I did come away with serious respect for DSR. That kid is a warrior.

Barring a collapse down the stretch, it appears the Muskies will make the Dance. Has this season been a success for the program? Did you expect better? Worse?

I wish I were as confident as you are that we are in. This stretch run (St. John's, Creighton, Seton Hall, Villanova) is brutal. I didn't know what to expect coming into this year other than that there would be fewer "can't lose" games late in the year. In previous years we could never afford to drop a game to URI, Fordham, Charlotte, etc. Now, aside from DePaul and our favorite punching bag, Butler, you don't have that. As a Cleveland sports fan, I expect Xavier to be my winning team to cheer for each year. Honestly, I was hoping the tournament as a 7-9 seed this year, and I think that can happen.

Do you agree with the ranking of Skittles from best to worst as red-purple-green-yellow-orange? Further, please provide your top 5 chocolate bar rankings and note you may include a Reese's peanut butter cup as a chocolate bar if you so choose.

Oh man, last time Joel answered these questions and got us in trouble by citing Georgetown's first round losses in the tournament. Now, I have to admit that I hate Skittles. I don't want to feel like I'm getting a workout when I eat a snack. Skittles are like dumbbells for your jaw muscles. Chocolate bar? Malley's here in Cleveland is the best, then Dove, after that I go with Reese's and then a big drop off to Mr. Goodbar and Crunch. I'm not a big candy guy, though, so that may be a terrible list.

Let's say you're watching a big game at Banners headquarters in your mother's basement. What snacks are you eating? Beverage selections?

Three of the four Banners staff are brothers, so we spend the opening weekend of the NCAA tournament bunkered down at my house every year. There is one food, and one food only, that we consume when watching that weekend and that is wings from BW3s. Specifically, and it's not weird that I have this memorized, a dozen boneless Asian Zing, two dozen boneless Spicy Garlic, and a dozen boneless Hot. Extra bleu cheese for Joel, the celery gets thrown away, and we create an atmosphere (literally, unfortunately) perfect for March basketball. As far as drinks, it's an actual five gallon jug of water. Incidents that will remain off the internet have led to the curtailing of any adult beverages.

Back to hoops, how far do you think the Xavier team can go in the NCAAs? Which Big East squads do you think eventually make it?

It's all in the draw for Xavier. Huge cop out, right? Avoiding that 8/9 game is going to be key. This team is good, but I don't think it is great yet. We can win a first round game, but we aren't knocking off, say, Kansas in the second. If we can grab a six seed or better, we can really do some damage. From the Big East Creighton and Villanova are locks, Xavier is very close, and so is St. John's. There could really be six teams in if Marquette, Providence, and Georgetown don't completely cannibalize each other. The Golden Eagles have their fate in their own hands, because they play each of the other two.

Are you excited about the Big East Tournament at MSG? Sure beats that convention hall in Atlantic City, huh?

Outrageously excited. My fondest memory of college is one of my profs pulling the screen down for lesson and revealing that she'd set up the projector to show the opening day of the Big East tournament. If you are a college basketball fan and seeing that court at the noon tip doesn't get you pumped, you have a serious problem. Atlantic City was the polar opposite of that. You could play the most exciting of games there and have it come off feeling like a junior high formal.

Semaj Christon ready to make the leap or is he sticking around another year? How will this team look next season?

Semaj shouldn't go yet. He's brilliant off the dribble and getting to the rim, but he shoots 29.6% on 2pt jumpers and his 44% from behind the arc is from a tiny sample size of just 29 shots. If he stays, the best recruiting class in Xavier history will join him. The incoming freshman are top 15 in ESPN and Scout rankings, Remy Abell will be eligible, and only Isaiah Philmore and Erik Stenger are moving on. This team will be loaded next year.

How great is this picture of Roy Hibbert with a casual headband? 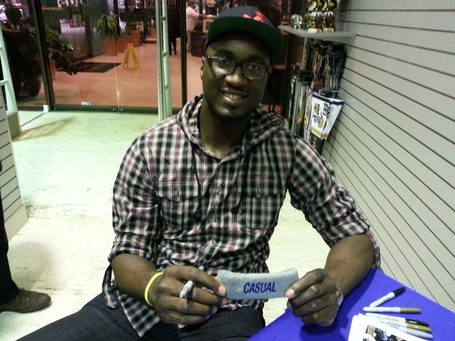 That picture is impressive. I'd be tempted to use it for the header of every single article.