Your Georgetown Fighting Hoyas attempt to stave off a season-ending soul-crushing loss to the Seton Hall Pirates on Thursday night and as usual we here at THE GLOBAL PHENOMENON are bringing you everything you need to know about Georgetown's next opponent. Here once again to paint a picture of the Pirates is Jason Guerette, your source for Seton Hall on the twitters. Let's do this!


Do you consider this season to be a success for Seton Hall? If so, why? If not, what more needs to be done?

I don't think you can at this point. They had Marquette and St. John's last week at home, NEEDED to beat at least one of the two, and couldn't get it done. That's the story of the season- this team has talent, and it has experience, but it's just been one disappointment after another. From close losses, to not playing well at the Rock vs on the road (the opposite of what it's historically been for SHU), to not finishing close games (a long-time problem for the Pirates- not just this year), things just haven't clicked.

Willard has said there isn't a team in the Big East that he thinks SHU can't beat, and he's right- all of the Pirates' remaining games (except maybe at Creighton) are winnable. But morale is down right now, although the team would never tell you that.

Willard suspended Brian Oliver and Eugene Teague for the St. John's game because of their attitude at practice following the Marquette loss. Those are two SENIORS getting suspended in the thick of conference play. That should tell you all you need to know.

Georgetown's loss to Seton Hall was more of the more demoralizing losses of the JT3 era. No real question here, but I just wanted you to know that.

That checks out since it was pretty much the only time I can remember that they actually played well in DC, let alone won. One of their impressive efforts on the road that has yet to be duplicated at home (the others being at Xavier and at Providence).

Which player(s) on Seton Hall have shown the most improvement as the season has progressed? Any that have been disappointments to you?

I really can't put my finger on who's shown the most improvement, although Aaron Geramipoor has been a big boost down low. He's been phenomenal defensively (especially on help D), standing his ground, rebounding, and being straight up to contest shots.

In terms of disappointing players, again- I really can't point to any one guy. It's just kind of been a team-wide funky year.

Looking forward, who is Seton Hall's starting five going to be next season and how do you think the Pirates will fare in '14-15?

I never like to get into starting fives, potential or otherwise, but I can almost guarantee you that Isaiah Whitehead, Sterling Gibbs and Patrik Auda will be part of it, barring unforeseen circumstances. As for '14-'15, Seton Hall will be one of the more interesting teams in the Big East with a boatload of talent from across the river coming in with lofty goals to restore the Pirates back to where they were before George Blaney screwed everything up.

But they will be such a young team, younger overall than they've been in a long time, and someone will need to step up and lead. Who that ends up being will be interesting to see, in large part due to the fact that this year's team doesn't have an alpha-dog personality (and they haven't had one since Jordan Theodore). Plus, they'll have a 7-2 transfer eligible for Big East play (Chier Ajou). 7-2 guys are always fun.

Please rank, in order of greatness, the colors of original skittles.

From top to bottom- Red, Purple, Green, Yellow, Orange. So it is written. 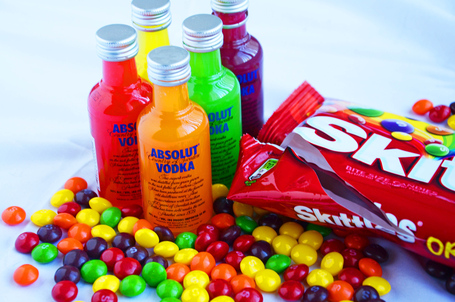 Taste the Rainbow. via maxcdn.thewhoot.com.au

With just about a month to go until Selection Sunday, give me your Big East teams that make the Dance.

Creighton and Villanova are locks. Xavier is also in. Of the three bubble teams (Georgetown, Providence, St. John's), I think two of them will sneak in. If the Pirates win on Thursday, I think it's tough to see the Hoyas in, though (sorry), although the tandem of Creighton and Nova to end the season could be an opportunity to erase it.

Are you a coffee or tea guy? regardless of your choice, please detail which types of either that you drink and what you put in it.

I am a tea person primarily because I am a broadcaster (St. Francis Brooklyn, SHU Women's Basketball fill-in, various other things), and I make it a priority to make myself a cup after every game I do. I'm not picky on what type of tea I drink, but whatever it is, I add either lemon, honey, or both. Gotta give the pipes some comfort after talking for a couple hours straight (haha)!

Give me your projected Final Four.

Oooh that's a tough one. At the moment, I'll take Wichita State, Arizona, Cincinnati (really like their Big East-style defense), and (as I gouge my eyes out, and because they've been the luckiest team I can remember going back decades) Syracuse.

If Michigan State were healthy, they would also have a shot. Louisville is another team that's capable, but somehow flying under the radar.

Depends on if their attitude changed. My guess is yes.

I think the Hoyas will win- they're desperate for a W, and I have no idea if Seton Hall can truly put last week (or this recent stretch of losing 5 of 7 since they beat the Hoyas) behind them. It will be low-scoring, so I'll say 66-61.