Sleeping with the Enemy: The Spartans of Michigan State

Share All sharing options for: Sleeping with the Enemy: The Spartans of Michigan State

Georgetown! Michigan State! Madison Square Garden! Super Bowl Weekend! OMG! Your Fighting Hoyas get set to grab the national spotlight in a Saturday matinee in the World's Most Famous Arena and as usual we here at THE GLOBAL PHENOMENON are bringing you everything there is to know about Georgetown's next opponent.  Here to dish on all things Michigan State is Chris Vannini from The Only Colors, your source for all things Sparty on the internet. Let's do this!

I remember being a little confused and intrigued when the matchup was announced but then seeing the tripleheader, I think it's a pretty cool idea. MSU already won a preseason tournament at Barclays Center in Brooklyn and defeated Kentucky in Chicago, so they're already used to playing in pro arenas in big cities. This season didn't have a game on an aircraft carrier or at an army base, like the last two, so this game and tripleheader can replace that.

Michigan State has kept it together despite the absence of Adrien Payne. Is this a testament to the quality of this team or moreso the wizardry of Tom Izzo?

I think the players deserve most of the credit. They're 5-1 without Payne, and 1-1 without Payne and power forward Branden Dawson, MSU's top offensive rebounder who broke his hand after pounding the table in frustration while watching film. MSU is without its top two rebounders and has managed to do pretty good on the glass. The bench has been the biggest key, with players who normally don't play much giving MSU some very big minutes on both ends in the past two games.

Who is Michigan State's biggest rival in the Big Ten? Related, how much do you hate typing ‘B1G'?

It's Michigan, without a doubt, but we have a fun meme at TOC that Wisconsin is MSU's #RealRival, since U-M fans sometimes deny they have a rivalry with MSU, especially in football. But MSU's biggest rival is Michigan in all sports, without a doubt.

As for B1G, I actually like it. It has become easier to type than "Big Ten," and it doesn't remind you that the number in the name doesn't match the number of teams. It was goofy at first, but it has grown on everyone.

Maybe it's just me but I have an issue with the nickname ‘Sparty'. What's the deal with ‘Sparty'? Like, ‘Oh, that's a bad loss for Sparty!' or ‘Oh, look out for Sparty in March!' Does ‘Spartans' really require a shortened version? 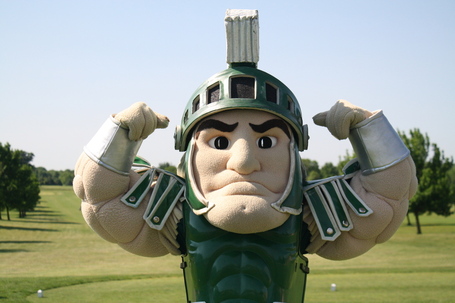 It's not something that MSU fans like. Opposing fans use it as a slight, and athletic director Mark Hollis tries to make it clear they're the "Spartans." But it's no use. It's best for MSU fans to accept it and own it. Sparty is one of the most recognizable mascots in American sports. Embrace it.

Where do you see Michigan State finishing in the Big Ten? How far does this team have to go in March to stamp this season a success?

Right now, it's looking like second place is a safe landing spot. Michigan is undefeated in league play and has probably already played its two toughest road games, including a win in East Lansing. MSU's second half conference schedule is more difficult, but Payne could be back soon. Meanwhile, just about everyone else in the conference is collapsing. Penn State won at Ohio State. Northwestern won at Wisconsin. Iowa still has the talent to make a run, but it's looking like a 2.5-horse race for the rest of the way.

I would have gone with this season, when he was launched out of a cannon, but it turned out it wasn't him in the cannon. I think the 300 theme in 2007 was pretty cool, around when the movie came out. Izzo had a heavy-duty Spartan helmet, while the players were dressed up like fighters in the movie.

Speaking of Izzo, he dabbled with an NBA job a few years ago. Not that he's going anywhere anytime soon, but in your opinion who would the top 3 candidates be if that job should open?

I would have put Brad Stevens at the top of that list, but he moved on to the Boston Celtics. If Izzo were to leave, I think the top two would be assistants Dwayne Stephens and Dane Fife. If they were to go outside, I'm not totally sure, but it would be an established head coach.

Who would be the starting 5 on the all-time Michigan State hoops team?

These are always up for debate, but I'll go with this: Mateen Cleaves, Shawn Respert, Magic Johnson, Draymond Green and Johnny Green.

Let's say you and I are hanging out at a bar. What's your drink order?

We're covering a lot of topics, I see. I'm a simple guy. I'll just get a beer. And no, I don't really care which beer. I know, I'm the first college sports blogger without a strong opinion on beer and other alcohol. Oh, well. #RealGoodTime

What are the top selling points to a recruit about East Lansing, Michigan?

It's the quintessential college experience. A beautiful campus that feels like a college campus, with a decent downtown area and just down the street from downtown Lansing, which has plenty of stuff to do. There's a good party scene off campus. It's also not too far from Detroit, which always has events. As far as academics, MSU is one of the biggest schools in the country and has just about every major of study you can think of.

A solid, talented program that usually does well in the regular season before being upset in March. Kind of the opposite of MSU, which tends to get beaten down during the season, lowering expectations before a March run.

The Rose Bowl win was pretty fun to watch but please give us insight into the tremendous spectacle of the post-game locker room. The school president might not be the best dancer but respect to her for getting in the middle.

Mark Dantonio got the idea from Clemson coach Dabo Swinney to celebrate big after each win. So they adopted Rich Homie Quan's "Type of Way" as the team theme song. A short video of Dantonio dancing with the team after the Michigan game leaked, so MSU decided to start taping and showing the celebrations, which got pretty intense. As it got more popular, nationally, Quan decided to attend the Rose Bowl, and he was there in the locker room after the win. Toward the end of the dancing, the athletic director and president got in on the fun. It was silly, but it was representative of the administrative support the football program has gotten under Dantonio that hadn't previously been seen since the 1960s. MSU's football was always inconsistent, and a big reason for that was a lack of support. Now, everyone is on the same page.

Think it's going to be very close, but I say the Broncos come out on top.

Sell me on why I should head to MSU rather than Michigan. Ann Arbor seems like a pretty casual town. Better parties at State? Girls?

The academics at U-M are obviously higher-ranked overall, but MSU does have a number of programs among the best in the nation, including No. 2 in nuclear physics, behind MIT. I mentioned the campus above, and that's one notable difference. U-M's campus is mixed in with the town, while MSU's feels more like a park and is more scenic, with the football stadium and athletic buildings right in the middle. The running joke in the state is that U-M students go to MSU to party, athletes included. There are plenty of good-looking women at U-M, but I think fans of both schools would say MSU has a much higher percentage.

Apparently Detroit is now experiencing a hipster upswing and it seems like everyone is raving about the coastline as a great place to spend the summers (I think Mario Batali has a spot there or something). What's casual in Michigan?

When it's not below freezing, everyone enjoys times out on lakes. The Great Lakes are notable, but Michigan has tens of thousands of inland lakes. There also many campgrounds and parks, especially up north. Traverse City features the Sleeping Bear Dunes, and Mackinac Island and the Upper Peninsula are very scenic. Detroit has seen an influx of hipsters in certain areas and, as I mentioned above, there are always concerts, sports and other events downtown. If you know where you're going, it's a good time.

I live right off 8 Mile, so I'll go with Eminem. I remember going on a high school class trip to Washington D.C., and when a group of students from San Francisco found out where we were from, they asked if we were near 8 Mile and what it's like (since the movie had just come out. We were from the suburbs). Eminem seems to have cleaned himself up a bit and is more notable nationally, while Kid Rock does an inexpensive concert in the area seemingly every weekend in the summer.

I'm thinking something along the lines of 70-65 for MSU. Georgetown isn't a great offensive team or on the glass, where MSU is struggling without Payne and Dawson right now.