Your Fighting Hoyas of Georgetown take on the Villanova Wildcats tonight and as usual we here at THE GLOBAL PHENOMENON are bringing you everything you need to know about Georgetown's next opponent.  Here with us to dish on all things Wildcats are our friends at VU Hoops, the place you want to go for all of our Nova needs.  When you're done reading this opus, check out our answers to Nova's questions right HERE. Let's do this!

So Villanova, you think you're so big and tough, huh?

Damn straight. One of the old guard had to step up this year and keep the new guys in check. I think for the first time in a few years I'm actually confident that Villanova will win every night. It's good to have that feeling back.

Villanova was picked to finish in the top half of the Big East but not many thought you'd have this much success. What's been the key?

The big one is turnovers. 'Nova, and Ryan Arcidiacono especially, are taking care of the ball better this year.
James Bell's breakout season has been incredible. Nobody saw that coming and so getting another reliable scorer on the court has caused teams some problems. No more are the days where Arch dribbles around the backcourt before hoisting a 30-footer. Although he still fires one of those up at least once a game.

Most Hoyas fans are expecting a spanking tonight (and not in the casual dungeon way). Is there any reason you see to give up hope that Georgetown can win this game?

If there is one glaring weakness with Villanova's defense, it's that they devalue the three-point shot, almost to the point of daring teams to shoot them. And boy, did Creighton ever oblige. I could see DSR being left open way too often, and he's a good enough shooter to keep Georgetown around.

Gratuitous Jay Wright style question: in your opinion which game did Wright look the sharpest and please provide documentation and reasons why. 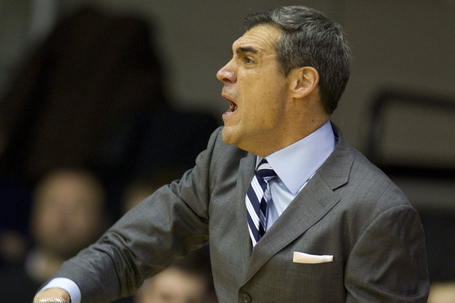 The suit he broke out for DePaul is my favorite so far this season. The only thing I'm not a fan of is the three-button jacket that he often sports, but considering he's 0-2 this year in two-button jackets, I can't complain too much. I like the charcoal suit and the shirt/tie are Villanova colors - plus I dig the pocket square.

You just returned from a bachelor party in AC. Please provide all of the details. ALL OF THEM. (Note: I just saw 'The Wolf of Wall Street' so nothing you say will surprise me). Related, which had more cocaine in it: the Wolf of Wall Street film or Nova's locker room in '85?

There are a few photos that will never see the light of day, that's about as much as I can say in this forum, but if we do end up meeting up later this year I'll give you the details in person. Other than Matthew McConaughey's cameo (which is just fantastic) I don't think there was a single vial in the entire movie. Everything was just piles and piles of drugs. So unless Rollie had a pile in the middle of the table, I think Wolf wins.

Side note: My company just hired a kid who was an extra in the plane scene. He is confident that filming it was and will always be the best day of his life.

Do you miss the old Big East?

Rooting for Syracuse/Pitt/UConn failures just doesn't feel the same anymore, does it? I don't miss it terribly though. It's going to take a little while to bed in the new guys and create some rivalries but long term I think this is going to be fun. Who am I kidding? I hate Creighton and I want to burn down a cornfield in an offering to the gods.


Let's say you and I are hanging out and go to a bar. What drink are you ordering to start it off?

Jameson Black Barrel on the rocks. I don't know what it is about that stuff but it's like drinking water on a hot day. I've been on a craft beer kick lately and love to try new things, so if there's a beer I haven't tried before that's going to make its way out eventually.


Is there any reason I shouldn't hate Ryan Arcidiacano?

Hate on Ryan all you want but you have to respect ArciDOGEacono. Such wow. Many 3s. You're really going to hate him when he stops the 2-3 boneheaded plays a game. If he can continue to play as well as he did against Marquette he'll be in the running for 'when does he graduate?' status in the coming years.

I think with the right draw this team can get to the Final 4. Anything less than the Sweet 16 is going to be a failure, and I think most fans thought that before the season even started. I would also like to see a Big East regular season championship. Not winning that wouldn't make the season a failure but with the way the conference has shaken out this year it would be disappointing not to finish on top.

What's Scottie Reynolds up to these days?

Last I heard he was balling over in Turkey. I think we lead the country in good college players playing in obscure places.

Villanova 72, Georgetown 62. A good game but the Hoyas' lack of depth hurts them in the end.