Sleeping with the Enemy: The Musketeers of Xavier

Share All sharing options for: Sleeping with the Enemy: The Musketeers of Xavier

Your Fighting Hoyas of Georgetown take on Big East virgin Xavier on Wednesday night and as usual we here at THE GLOBAL PHENOMENON are bringing you everything you need to know about Georgetown's next opponent.  Here to eXpound on all things Xavier are our new best friends at Banners on the Parkway, your source for all things Xavier on the internet.  Let's do this!

Welcome to the Big East, my man! How are you enjoying things so far?

Love it. The A-10 season was 75-90% about handling your business and 10-25% about the few games on the schedule that had the potential to be anything but a bad loss. In the Big East, (almost) every game is against a team that not only has meaningful NCAA tournament aspirations but would also gladly use your cooling corpse as a stepladder on the way up. Four games in, we're 3-1 and haven't left a single game feeling like we just played an opponent who capitulated after ten minutes on the way to a CBI bid.


Let's get this out of the way off the top since we're going to be best friends for a long time - what the hell are the Banners on the Parkway of which your site is named?

Traditionally successful programs often hang banners in the rafters of their home arena to commemorate past victories. With repeated trips to the Sweet 16 and scads of A-10 titles, the Muskies have sent plenty of linen to to the top floor of the Cintas Center in recent years. Of course, it's also a little aspirational, in that we still seem to be lacking a Final Four or National Champion banner. Also, the Cintas Center is on Victory Parkway, which is where the "Parkway" part comes in.


Georgetown had the misfortune of having Cincinnati in its conference for awhile, and now we get you guys. Talk to me about the Xavier-Cincy rivalry from the X perspective. Why do you guys care so much about Cincy?

When I was a kid, this one cousin of mine who was (and still is) 6-7 years older than me would go out of his way to make every family gathering miserable. As I got a little older, I realized that he was no longer bigger than I was and he wasn't that intimidating to begin with. I started holding my own, then I started having the upper hand, then we got too old to throw hands every Christmas. The point is, I realized earlier than he did that I could hand it to him. That's where UC is right now; their fans still insist that they're the marquee program in the city (We have football! We have the Big East! Never mind, the Big East doesn't mean anything now!) but Xavier has won 10 of the last 13 and enjoyed rubbing their faces in it every time. They'll never stop running their jaws, and we'll never not enjoy beating them.


Semaj Christon: How good is this kid?

Stupid good. Last year, Semaj was approximately 107% of Xavier's offense and - while he was spectacular at times - it clearly wore on him. This year, he is able to step back and distribute and the results have been astounding. He is more relaxed on the ball and focuses on getting everyone involved, almost to the point of being frustrating. When he goes hunting his shots, though, he's tough to stop. His open-court speed and incredible burst off the bounce have always troubled defenses, and now he has added an outside shot just reliable enough to need respected. When he is making jumpers, he's borderline unguardable. Oh, also, he has a penchant for reading the game on the defensive end that occasionally results in him coming from where he's supposed to be to where he needs to be just in time to turn an easy basket into a blocked shot or a simple move into a turnover. I'm hoping X gets a third year out of him, but I'm not dumb enough to think he'll spend four here.


Other than Semaj, who are some of the players on Xavier that Georgetown needs to be aware of?

Big man Matt Stainbrook is the other most consistent contributor for X. He's a good rebounder on both ends and a more than adequate defender, but his real value lies in his ability to make smart decisions with the ball on the post. You can run the offense through him and trust him to kick out of a double, find a cutter, or get his own shot going to the basket.

Darwin "Dee" Davis, Jr. is basically my best friend in the whole world. Ask him, though, and he'll act like he doesn't know me. He's a usually reliable ball-handler who only sometimes does stupid things trying to force in transition and a good three-point shooter when given an amount of time usually measured by a sundial to line it up. He's a tough off-ball defender and earns his scholarship chasing opponents' shooters. Justin Martin is probably the least consistent player in the world, but when he's going well he is a matchup problem and an above-average rebounder for his position.


D'Vauntes Smith-Rivera decommitted from Xavier and went to Georgetown. What was going on there? You mad?

DSR de-committed from X basically saying that he had rushed the process, then committed to G'town basically saying that he wanted to play big-conference basketball. Still, I'm not mad at the kid for trying to do what he thought was best, and I'm not mad at the school for picking up an extremely talented player. I'm also not really mad at the fates, because DSR's decommitment was part of a chain reaction of events that ended with Semaj in blue and white. There's a little part of my heart that wishes somehow we could have ended up with both players, but mostly I wish D'Vauntes all the best except the two or maybe three times a year he takes the court against Xavier.


David West is a Xavier alum and has carved out a great career in the NBA. Other than West, however, X doesn't seem to have produced many players who exceed at the next level. Any thoughts as to why?

Well, James Posey picked up a little bit of jewelry on his way through, and Brian Grant and Tyrone Hill represented the program well as professionals. More recently, Jordan Crawford was born to get buckets and is blissfully plying that trade in the league right now. I don't pay too much attention to the NBA, so I can only speculate as to why Xavier isn't churning out pros. If I had to guess, I would point to the fact that the most successful Muskie teams (the Tu Holloway years aside) were based on having an ensemble of players who knew their roles and executed at a high level rather than one or two superlative performers surrounded by role players.


Let's travel back through time to the 2006-07 NCAA Tournament. Everybody knows that Georgetown made the Final Four that year and lost to Ohio State, but not everyone remembers that Xavier nearly knocked off Ohio State and led by 9 points with just 3 minutes left before losing. What was your reaction during and after this game?

What is like rage, only worse and possibly life consuming? We both grew up in Ohio, so everyone assumed that we were OSU fans. I (Brad) reacted to that by developing a low level dislike for the Buckeyes, especially their football team. When that game rolled around, I had to deal with a whole bunch of myopic OSU fans finally realizing who my team was and then getting the pandering condescension for which the Buckeye fan base is so famous.

With nine seconds left, my favorite player at the time, Justin Cage, grabbed a defensive rebound with us leading 61-59. Greg Oden went to foul and did so with a two handed, never attempt to play the ball shove that bounced Cage off the basket stanchion and onto the ground, where he received medical treatment. Oden was somehow, and I'll never know how, only called for a foul and not the flagrant that was so glaringly obvious. Cage recovered enough to make one free throw (he had 25/6/1 in his final game), and then Ron Lewis made a three when we elected not to foul.


Xavier has had an impressive run on head coaches recently. Pete Gillen, Skip Prosser, Thad Matta, Sean Miller...can Chris Mack get himself into the category of his predecessors?

Coach Mack has made three tournaments and two Sweet 16s despite coaching limited rosters hamstrung by recruiting whiffs, injuries, and the inscrutable eligibility decisions of the NCAA. He's won more than 68% of his games at the helm. His best player this year has made great strides under his watch, the team seems to genuinely enjoy playing together, and he has slotted players into roles that mostly accentuate their positives while diminuating their negatives. We're 3-1 in the Big East and in solid position for decent seeding in the tournament. Depending on who you believe, next year's recruiting class is easily in the top 10 and probably in the top 5. I'd say he's well on his way.


Xavier is off to a great start in its 1st Big East season. Where do you see Xavier finishing in the Big East and who from the Big East makes the Dance?

I see X and Georgetown battling it out for 3/4 in the league, with Marquette hanging around if one of those two stumbles. Nova and Creighton are in barring huge collapses, and Xavier is in good position. I think Georgetown is comfortably on the right side of the bubble, Marquette is on the wrong side, and Providence and St. John's are going to have to do something special to merit consideration. Beyond that, you're looking at teams who need to win the conference tournament in my estimation. Check back in a couple months to see if my estimation was worth a crap.


Please use this opportunity to discuss Skyline chili. 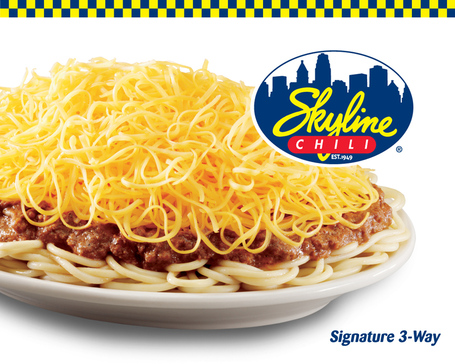 The human sensory system is insufficient to determine the difference between Skyline that has yet to hit the digestive tract and Skyline that has just finished it. The stuff is awful; I wouldn't feed it to my imaginary dog. Gold Star is no better. If you want a local food experience, sell some plasma and go to Montgomery Inn.

There's a sense in which predicting scores is a fool's errand, but that makes me the man for the job. Coach Mack loves defense, and while there's no shame in being lit up by Creighton, he's going to be itching to stifle someone after that display. Meanwhile, Georgetown is beaten up and academically questionable right now. I'm saying Xavier 71, Georgetown 60.