Sleeping with the Enemy: The Bulldogs of Butler

Share All sharing options for: Sleeping with the Enemy: The Bulldogs of Butler

Your Fighting Hoyas of Georgetown get back on the court with a Saturday evening affair in the first-ever Big East battle between the Hoyas and Butler Bulldogs and as usual we here at THE GLOBAL PHENOMENON are bringing you everything you need to know about Georgetown's next opponent.  Here to babble on all things Bulldogs is @ButlerVictory, your twitter source for Butler knowledge and know-how.  Let's do this!

Welcome to the Big East, my dude! How are you enjoying things so far?

Well, thanks man...but it's hard to feel all warm and fuzzy at the moment considering last night's meltdown loss at home to DePaul. Surely you can understand that. Big picture, it's both exciting and scary to be in the Big East. The Butler program probably bit off more than it can chew (at least in the short term), but it was obviously a move it had to make and a huge opportunity. Time will tell how the Bulldogs handle it.


Before we get started, my condolences on the loss of Blue 2. How's Blue 3 coming along?

Appreciate that. Blue 2 was the best thing to ever happen for the Butler marketing department. Blue 3 has had big shoes to fill, but has held his own in his rookie campaign. 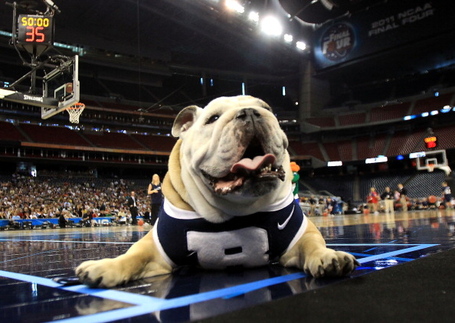 Butler has been a bit of a surprise thus far while playing better than most expected outside of the Big East and with three losses coming by a total of seven points, including two in overtime, and all coming against teams that are likely going to the tournament (Oklahoma State and LSU at the Old Spice Classic in Orlando). What's been the key to the early success?

Yes there was some early success and the Bulldogs have largely out-performed their talent level. The keys were largely what they have been for years: play as a unit, protect the ball, defensive rebounding, hustle. When those things don't happen, it can get ugly.

Who are some of the players that Georgetown needs to be aware of on Saturday?

His name is Kellen Dunham, and most think he has a shot at playing in the League. He has been a stud and he has done so while basically being the only guy opponents have to gameplan against. That's not easy to do. It's well documented that Dunham can shoot from anywhere, but it's the development of his mid-range and dribble-drive game that has made him a much better player. If not Dunham, then Khyle Marshall - when he stays out of foul trouble - can give teams some fits. Hint: Marshall likes to go to his left.


What was your immediate reaction to the Brad Stevens departure? Were you good with the Brandon Miller hire?

Oh Brad, where art thou? There was no way that news could NOT be immediately shocking. Us Butler people had probably gotten a little too comfortable with him and the helm considering how many jobs he had turned down. However, Stevens had talked to me (and others) on several occasions in casual conversation and just gushed over the NBA. Felt like I should have seen it coming, in some respects. I think he is a better fit in the NBA than he was in the college game. As for the Miller hire, it was predictable and the safe play. He knows the program well and understands how/why this job is different. Time will tell if it was the right move, but he is in a precarious spot following Stevens.


What has been the biggest difference on the floor/game management between Stevens and Brandon Miller?

The easy answers are late-game management and putting the players in the best situations to be successful. Stevens was an absolute master at it, so maybe it's not a fair comparison, but it is what it is. There is no hiding the fact that Butler has had real problems closing games out when they have no excuse not to. On a general level, the Bulldogs do a lot of the same stuff now as they did with Stevens - just not as many plays in the book and not as polished.


Hinkle Fieldhouse is on most Top 5 bucket lists for college arenas. Talk to me about Hinkle and what it's like to watch a game there.

It's nostalgic. No doubt Hinkle is a special place, and anybody who has been there would tell you that. We are spoiled getting to watch games there on a regular basis, but very few take it for granted. You really do feel the history and basketball roots simply being in the building. Going to a modern arena to see Butler play just doesn't feel right. Hinkle is synonymous with the program. If you get a chance, go.


Butler has been to two Final Fours in recent years. From your perspective, what was the single-most rewarding game throughout this run of excellence.

Wow, really tough question. My immediate thought was the win over Kansas State in the Elite 8, allowing Butler to reach its first Final Four...but you could argue several games in the bunch. The way Butler performed down the stretch of that game against the Wildcats was a true joy to watch, on top of the fact that it meant the team was coming home to play in the Final Four in Indianapolis. It was just too good to be true.

(Casual Note: It was also a joy to watch Georgetown crush Kansas State in this year's Puerto Rico Tip-Off.  We are brothers for life.)

When I think of Georgetown, I think of it being one of the staples in college hoops outside of the 5 or 6 blueblood programs. Solid history, a decorated basketball tradition and long list of prominent alums. I think of watching Allen Iverson as a kid. In recent times, I also can't help but think of the struggles (to put it nicely) in the NCAA tourney. Apologies, but yeah.


If I have one night in the greater Indianapolis area, where am I eating and where am I partying?
You're eating at St. Elmo's steakhouse and you're partying on the strip in Broad Ripple. Simple as that. 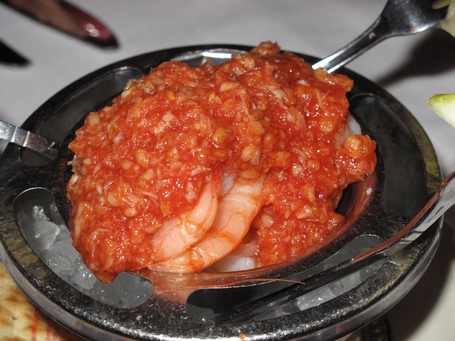 The famous shrimp cocktail at St. Elmo  via www.roadfood.com

True or False: Roy Hibbert has been the greatest thing to hit Indiana since Larry Bird.
True. Only cause it makes you smile.

The famous Roy Hibbert. via gamedayr.com