Share All sharing options for: Somebody's Getting Married! Casual Hoya Staffer Set to Take The Plunge!

Ladies and gentlemen, Hire Esherick is getting married! 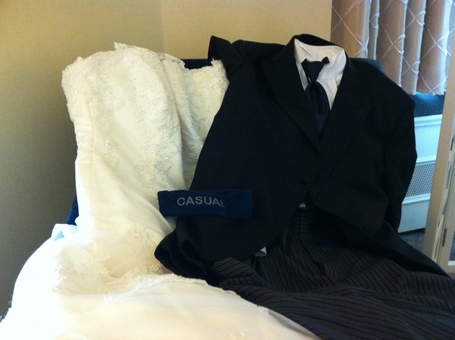 The bridegroom, who currently lives in the beautiful and weed-friendly city of Denver, Colorado is, much like the rest of us, a cynical yet delusional Hoyas fan who has been uplifted by recent triumphs and beaten down by bitter defeats.  In addition to his love for all things Kelly Clarkson and possessing rollicking dance moves displayed at Casual Extravaganzas throughout the years, he is a beloved and heroic contributor here at casualhoya.com where he occasionally opines on Big East television contracts and has won zero accolades whatsoever for setting up the Game Threads for every Georgetown Hoyas game and never contributing to the Casual Awards.

A good sport about having to wear Patrick Ewing jerseys to Georgetown games despite not having attended the school, the bride is nicknamed ‘You're Insane' by her friends for putting up with her soon-to-be-husband over the past few years. Though undoubtedly making a huge mistake, this quite casual chica is looking forward nonetheless to what will be a sparkling ceremony in hipster yet scenic Portland, Oregon, and hours upon hours of being left alone while Georgetown is playing this season or when I bug her soon-to-be husband about writing something for the damn blog.

On behalf of all of THE GLOBAL PHENOMENON's readers past, current and lost as a result of this post, we wish the future Mr. and Mrs. Hire Esherick a lifetime of love, happiness, and casual sex.

And yes, Casual Brewmaster 'CasuALE' has created the epic new 'CasuALE: Matrimonial' just for this bigger than the Royal Wedding occasion that none of us will be attending. 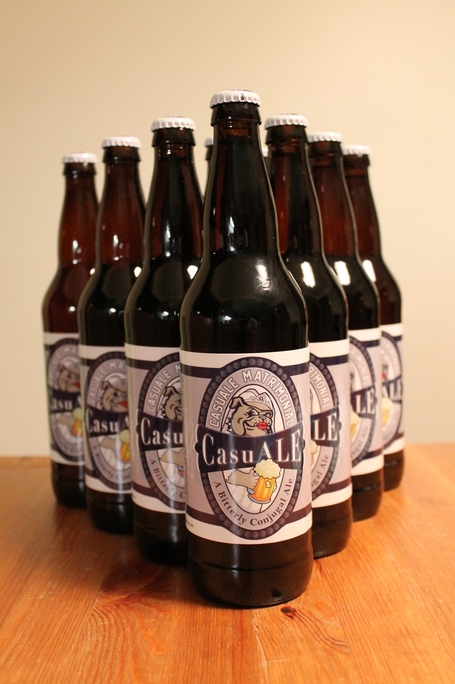 Matrimonial is modeled off the beer Lagunitas beer hop stupid. It's an imperial IPA with lots of Pacific northwest hops but has 10 lbs of wildflower honey in it which really dried the beer out. So expect a hop bomb but it's not too over the top with hops and isn't too sweet. And has a firm bitterness any marriage would expect. Hopefully it's that last bitter punch in the face that reminds Hire Esherick his life is over.

In lieu of gifts, Hire Esherick requests that Syracuse continues to suck and that everyone buys him a drink at Casual Extravaganza V after the Butler game on February 8th. Mazel tov to the happy couple!