Share All sharing options for: Document Your Lunch: Friday, August 30, 2013

The Georgetown - Syracuse rivalry has been destroyed by greed, but today, on this final day of Document Your Lunch season, it is unified by lunch. Here with us is old foe Hoya Suxa, who makes his case to settle one of the more important debates of our time. Take it away...

There isn't a doubt in my mind that New Haven's Modern Apizza has the best pizza in America. Knuckleheads that argue that Chicago-style pizza is the best that Earth has to offer need to have their heads replaced with a sign lodged in their neck that reads, "Dumbass." The New York pizza enthusiasts? I don't want to stab them, but they're missing out on reality-altering pizza just 90 minutes to the northeast. New Haven has the best pizza you can shove in your face, and that fact is non-negotiable.

What makes New Haven's pizza the best is the style: a thin crust, blackened due to the brick oven firing. Three joints in New Haven -- Sally's, Pepe's, and Modern -- do it best, and people will argue with you until you eventually poison them to end the conversation on which place has the best pies. Modern, to me, is the best in the overall of the three, but Sally's clam pie is the strongest of those places (and Pepe's clam pie is better than Modern's). (If you haven't had a clam pie from any of the three you're wasting your life.)

For my birthday excursion -- 90 minutes each way on the shittiest piece of I-95 -- we did a half clam (with white sauce), half Italian Bomb (with red sauce) pie. The clam pie is fairly straightforward (just take it easy with the lemon), but the Italian Bomb deserves special recognition: It's bacon, sausage, pepperoni, garlic, mushroom, onion, and peppers, all resting bizarrely on mozzarella. It was better than watching John Thompson trying to explain why the Princeton offense isn't the basketball equivalent to the Ford Pinto. All that remained were two slices (one clam, one Italian Bomb), codas for later in the evening. 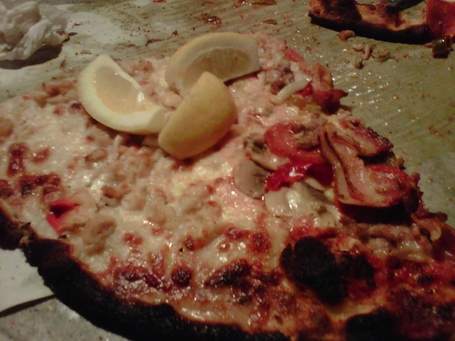 In March it was the loss to Florida Gulf Coast.

In June it was the season-ending torn ACL of Greg Whittington.

In July, it was the bewildering and gut wrenching exile of Georgetown's proud bulldog mascot.

But now the calendar has mercifully flipped to August, and it's clear we need Document Your Lunch more than ever. Indeed, the long wait for lunch documentation enthusiasts to once again proudly document lunches is finally over! Welcome back everyone, to Document Your Lunch.

What exactly is Document Your Lunch? It's pretty simple, really. All you need to do is answer the following question in beautiful, luscious and supple documentation:

WHAT DID YOU HAVE FOR LUNCH TODAY?

This year, with so many different social media options available we are going to kick this sucker into OVERDRIVE. We'll be documenting on twitter (@casualhoya), documenting on instagram (@casualhoya), and of course, thanks to SB Nation's wonderful design decision to give me as much as five story slots to fill on the main page with glorious pictures of documented lunch, we'll be documenting in abundance right here on your favorite cuddly Georgetown Hoyas website, THE GLOBAL PHENOMENON.

You can #DocumentYourLunch by simply taking a pic of your lunch and sending the documentation via tweet to@casualhoya, via instagram (@casualhoya) or via email to casualhoya@gmail.com.

Use the damn hashtag #documentyourlunch along with your pic and brief description. Your lunch will be shown to the masses and we'll make you famous and cool with AUTOMATIC RETWEETS to our abundance of loyal followers so you can impress chicks (and/or dudes).

This is the greatest daily feature in the history of the world wide web.

www.CasualHoya.com: Fighting Through the Dog Days of August and Documenting Lunches Since 2009.