Share All sharing options for: Class of 2014 Forward L.J. Peak Commits to Georgetown

In a bit of a surprise, 4-star 6'5" small forward L.J. Peak has committed to Georgetown. Peak, ESPN's 54th ranked prospect in the Top 100, had narrowed his list to Georgetown, Florida State and South Carolina and it was widely expected that Peak would choose South Carolina especially after cancelling his scheduled visit to Georgetown just last week.

Peak played his freshman and sophomore years at Gaffney (SC) and transferred to Whitney Young in Chicago for his junior season. He had transferred back to Gaffney for his senior season, spurring rumors that he would commit to the homestate Gamecocks. However, Peak had other ideas:

"Georgetown is a school that will help me get to the league. It's a better fit for me." -Peak

Think this kid is ready to play in the Big East after pulling a switcheroo in front of his home fans?

Peak is the 13th best small forward prospect in the country and joins Isaac Copeland and Tre Campbell in Georgetown's impressive Class of 2014. Georgetown's main focus now in the Class of '14 is on a big man, and with Copeland and Peak in the fold as the frontcourt of the future, the staff can zero in on top 5 center Elbert Robinson, who has already visited Georgetown and has the Hoyas high on his list which includes Louisville and Ohio State.

Georgetown will enter the July scouting period with 3 commits. One of the major targets remaining is 6'10 big man Elbert Robertson from TX.

Highlights of Peak are below: 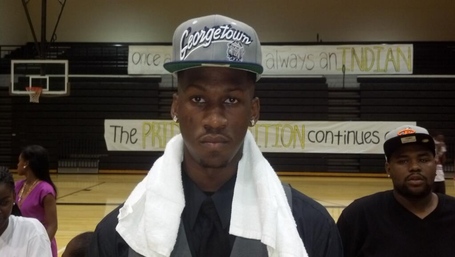