Sleeping with our Friends: The Wolverines of Michigan

Share All sharing options for: Sleeping with our Friends: The Wolverines of Michigan

I hate to interrupt the usual offseason flow of Casual Links and Open Threads but stupid Syracuse is playing in the Final Four and desperate times call for desperate measures. To quote the great Lewis Skolnick in Revenge of the Nerds 2: Nerds in Paradise, "there's something I've gotta do about it", and we're here today with a very special edition of Sleeping with the Enemy. Here with us to dish on all things Michigan is our buddy Zach Travis from Maize N Brew, the ultimate Michigan site on all the internets. Mr. Travis, this bomber of CasuALE is for you. Let's do this.

Congrats on the Final Four run! You must feel pretty good, huh?

You can't even begin to imagine. While Georgetown has been a pretty consistent NCAA Tournament team, Michigan pretty much bottomed out as a program in the late nineties, and after a long 15 years wandering the barren hellscapes of a March without Madness, storming back to the Final Four in the fashion this team has is just an incredible feeling, and I can already tell that this will be one of those special seasons I remember for the rest of my life. I'm just hoping that when I tell my grandkids about it I get to end it with, "and that was when Michigan became the dominant program you know today."


OK enough of the crap my dude, you realize that every Hoyas fan on Earth desperately wants you guys to beat Syracuse, right? No pressure or anything.

As a Michigan fan I can sympathize. My team's biggest basketball rival just happens to be one of the most accomplished programs of the past 15 years, and hasn't had a class of players without a Final Four trip since something like the 1995 class. So yeah, I know what it is like to have a new favorite team four or five times in March.
Is there anything that we can do to help? Maybe you can send us the lyrics to the fight song or any other casual Michigan chants that we can sing during the game?

Maybe you could give us a few tips on how to beat that 2-3 zone. Or pass along some good chants or mean things to say to Syracuse fans that we can use to get in their heads at the game.

I assume that (unlike Indiana that looked like it never faced a zone before ever in the history of the world) Jon Beilein will have the Wolverines ready. Any thoughts as to how the Wolverines may attack it?

Man, that Indiana game was really something, wasn't it. It seemed like every other Hoosier possession ended with an Indiana player bumbling the ball away or basically throwing it right to a Syracuse player. I couldn't believe Indiana was so ill prepared until I remembered that Tom Crean is their coach.

My best bet is that Michigan uses Trey Burke to try and make Syracuse uncomfortable. He won't be able to drive all the way into the paint like he can so easily against Man defense, but with his quick first step he should be able to get the edge on the players up top, and if that can force some help he will have passes to open three-point shooters. Past that, I think Michigan will use Mitch McGary at the high post a bit, as well as rely on him to attack Syracuse's weak defensive rebounding presence. If McGary can pull down a handful of second chance opportunities, he is bound to convert a few of them, and that could be a big boost to the offense.

Finally, I think Michigan will look to create points off transition opportunities and take the zone out of the equation entirely. Michigan has been great not only at moving the ball up the court quickly so far in the tournament, but doing it at the right times without forcing things. The more Michigan can score quick the more it will force the hand of the Orange offense, which hasn't been performing very good as of late.

If I'm in Ann Arbor for the 1st time, I'm going to Zingerman's right? Tell me what I'm ordering. 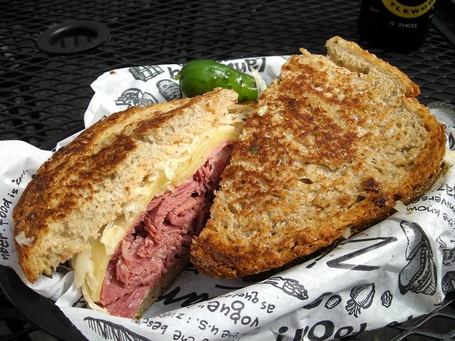 They may revoke my diploma for this, but I actually never went to Zingerman's. Yeah, everyone talks about it, but those sandwiches are like 12 dollars a pop, and for a college kid on a budget you don't spend that much on one meal when you could use that money towards a pizza and beer and still have change left over. If you're in Ann Arbor get Mr. Spots cheese steak or basically anything from Pizza House. Yes, I realize I just glossed over an Ann Arbor staple to direct you toward bastardized versions of signature foods from other cities. I was in college and I didn't know any better. I can't get rid of this nostalgia now, can I?

How has campus reacted to this Final Four run? You know anyone headed to Atlanta?

I live in Virginia now, so I'm totally unqualified to talk about this with anything other than second-hand accounts and youtube videos.

I hope these kids are enjoying it enough, but I know they aren't. When I was in school Tommy Amaker was the coach and next year was always the year Michigan would break through. These kids today don't know how good they have it.

I am hoping to go to the game, but it will be an impromptu trip if it does happen, and it will depend on all the boring stuff like getting time off work, finding reliable transportation, and budgeting my money right. Being old sucks. If I was still in college I would have blown half my student loan money finding a way down to the game and then being drunk the entire time I was in Atlanta. In related news: I have a lot of student debt and a hazy recollection of college.

NCAA Player of the Year: Trey Burke or Otto Porter? Related, do you think Burke will be a good pro?

I'm not going to get all high and mighty here. I get that you are in Porter's camp, and that's fine. Tables turned I would be too. But after watching Trey Burke for the last two years there isn't another player in college that I would pick over him in anything. Starting a program from scratch? Trey Burke's your man. Most exciting player? Burke. The guy you want with the ball in his hand as time is winding down? That's a Trey Burke, good buddy.

There simply isn't anyone in college basketball that has done more for his team that Trey Burke. He makes the engine run for Michigan, and has helped turn a group of freshmen, an inconsistent Tim Hardaway Jr., and a couple upperclassmen post players into a Final Four team. Granted, most of those guys are pretty good, but Burke takes the whole thing to the next level. He knows when to take over the offense and when to play facilitator. He runs the pick and roll so well that he probably runs off picks set by floor lamps when he is sleep walking. And he has an uncanny knack for delivering the perfect play at the perfect time.

If he isn't the player of the year I'm going to walk around for the next six months muttering Farva's speech about Mr. Sunshine-on-my-goddamn-shoulders John Denver from Super Troopers. If that award goes to someone else, they should just light it on fire.


Speaking of pros, any chance Denard Robinson does anything in the NFL?

I think he will if NFL-types will pull heads from arses and just put him at running back. Don't waste time trying to teach him to catch the ball (something he has never had to do). Try to exploit his strengths: field vision, ability to run in zone schemes, and speed OH MY GOD THE SPEED. Robinson spent four years running out of the backfield and making people look silly and now you want to give him the ball on slants and curl routes? The NFL just ruins everything good.


Enough about you, let's talk about me. What are your perceptions about Georgetown's program, and specifically feel free to dish on our early exits from the NCAAs of late. You put any of that on JT3?

I tend to stay wrapped up tightly in Big Ten basketball (why waste your time with anything but the best? I keed, I keed), but you're asking a Michigan fan if he sees anything wrong with a bunch of tournament appearances. No. That seems fine. I didn't know they let you go that many times in a row. I thought it was a rule you had to take ten years off every once in a while.

But seriously, my view of Georgetown is the same of a lot of other programs: good but not great. Frankly, it is pretty hard to be great. You have to kill it on the recruiting trail, develop talent really well, and coach in a sport where chaos reigns supreme. All while players jump to the draft early and coaches move up the ladder until they fall down a few rungs. Georgetown might not be great, but it is stable and pretty good. As someone that watched his football team hire Rich Rodriguez, as well as the ensuing carnage I can tell you, even the best laid plans to become an elite program can fall through.

None of this makes you feel any better. It never does.


How do you see the Michigan - Syracuse game playing out? Final score prediction?

I think Michigan finds some success against Syracuse thanks to ball security and the offensive rebounding vacuum that is Mitch McGary, but I don't think Michigan shoots the ball well enough from the outside to make this anything but a close game (despite giving up a ridiculous percentage of threes vs. FGs, Syracuse does a great job defending them, allowing just 28% from behind the arc). Meanwhile, I think Michigan's defensive revival continues enough to get Michigan some transition baskets and keep Michigan a couple points ahead. In the end I think Michigan pulls one out very late, and then I probably lose my mind trying to come to grips with Michigan playing for a national title.

I am actually pretty biased toward the Orange. My roommate at Michigan freshman year was from Syracuse and had been a big fan growing up. That year was 2003, so I got to hear a lot about that previous March's title team. Even all Carmelo Anthony's pouting in the years since hasn't really turned me off to them.

But this week you can bet that my hate is at least a nine. Ten is most likely reserved for those whose hate has been building for years. I won't try to compare myself to that. I just want to win. One more game of Trey Burke in a Michigan jersey, that's really all I want.

Hopefully Saturday night is good to both of us. Go Blue.