Your Fighting Hoyas of Georgetown take on the Evil Orange of Syracuse for the final time EVER in Big East play on Saturday at the Verizon Center, and as usual we here at THE AWARD WINNING GLOBAL PHENOMENON are bringing you everything you need to know about Georgetown's next opponent. Back with us again for this delightful exchange is Hoya Suxa, who has carved out a niche as being perhaps the most casually reviled yet lovable human anti-Georgetown swine on the internet. Mr. Suxa, this bomber of CasuALE is for you. Let's do this.

Wow, the final Big East showdown between Georgetown and Syracuse. Are you going to miss me?

Who are you again?

Honestly, one of my favorite things about the rivalry the last few years is you and Hire Esherick joining forces to came aboard the SB Nation death star. So, yeah, I'll miss you, only because the Internet will likely have less of us poking each other with sticks. And the Internet needs more stick-poking.


My dude, what the heck is going on with the Cuse? What a difference a couple of weeks makes, huh?

Someone is poisoning Syracuse's Gatorade jugs. I'm sure of it.

I think you can distill Syracuse's slide down to two things: (1) back-to-back-to-back games against the Big East's better teams (and Syracuse was in two of those for 38 minutes (Marquette and Louisville) and were decimated in the third by a tactical nuclear weapon in blue and gray); and (2) shit happens. This isn't the best time of year for the Orange to have the wheels fall off the bus, the bus to explode into flames, and the children on the bus to be burned while buckled to their seats, but it's not like Syracuse doesn't have a little bit of time to get its act together. I'll only start throwing tangible personal property at other tangible personal property if the Orange go into the Big East Tournament and play like eight guys in rec specs.


Wait, wasn't Mike Hopkins already knighted as the next King of Syracuse by Jim Boeheim? What the hell is he doing interviewing for the USC job? Let's say Hopkins gets that gig, who is next for Cuse?

I don't know what's going on with the Hopkins-to-USC? thing, but I do have a theory: Jim Boeheim is immortal and is going to continue to coach Syracuse until basketball is replaced by begging-for-bread-and-wearing-tattered-clothes in America's not-too-distant dystopian future. Therefore, USC becomes the most immediate viable option for Hopkins to become a head coach.

I think what you'll see happen is this: If USC is really serious about this, they're going to back up a dump truck full of money to Hopkins' house (allowing him to go back to his Southern California roots (no matter how terrible a job USC is)), Hopkins takes the job, in a few seasons Boeheim steps aside to do whatever (hopefully mailing John Thompson angry-grams twice a week), and Hopkins comes back to the Dome to crush some skulls. Outside of that, I have no idea what Syracuse's plan would be if Hopkins isn't going to be the guy. I'm not really worried too much about it because the applicant line for the job would be longer than Craig Esherick's Million Man Mustache Wax March.


In our last merry go ‘round you mentioned that Michael Carter-Williams wasn't the most important cog in the Syracuse offense. Given his play over the past few weeks, are Syracuse fans in the "I'm going to be glad to see MCW go pro" phase?

Maybe? I don't really listen to or read what other people say, mostly because my level of interest in other people is, well, negative percent. There's probably a strain of thought out there that thinks it'd be good to not deal with Carter-Williams' unique brand of "The fuck was that?" but I'm not sure it's on-point -- another season of tutelage and summer ball, given where he came from at the end of 2012 to where he is now, would likely sit Carter-Williams among the national elite. I don't think he sticks around, which is fine because this Tyler Ennis kid is coming in and he's apparently a horse whisperer or something, but I think the "Good! Go, jerkface!" mentality is a little unreasonable (like Dinosaur BBQ not putting salt potatoes on their menus in their new locations).


Does Jim Boeheim hate all journalists, or just those that do their jobs? Relatedly, please comment on this analogy: The Newhouse School of Public Communications is to Syracuse Athletics as Pravda was to the CCCP.

Was Big John just an officious bully to all journalists or just that dickbag, John Feinstein?

Jim Boeheim is the best interview going these days, and it's not even close. What makes blood leak out of your ears, though, is that he makes this awesome game out of it -- it's an open locker room and he's willing to talk about anything, unless he just doesn't care about your question. I'd rather deal with Boeheim's color than the vanilla crap that most coaches -- *cough* Jay Wright hasn't said anything remotely interesting in two decades and probably has dogs tied up in his closet that he tests cosmetics on *cough* -- spew at writers (and writers gladly lap up because they're just glorified p.r. vehicles (*cough* Dana O'Neil should have her head removed because it's useless *cough*)).

Take your shots at Newhouse, but it certainly isn't the Georgetown Ministry of Information.


Do you think this Orange team can make a run in the Big East Tournament and in the Dance or is an early March exit something you're already banking on?

I bank on nothing. Nothing! (And it has little to do with how Syracuse is playing right now.)

Tournaments are fickle shitstorms of terror. Blood falls from the sky and frogs are elected to no-show jobs in European governments. I just can't build expectations around either the Big East or NCAA Tournaments because they never do what they're supposed to do anyway, especially this year when we're all going to have our faces exploded because everyone is half-terrible and half-very good.

Is Syracuse still hanging around the top 15 or so teams in the country that can scorch earth in the NCAA's? Are they around the three or four teams that could win the Big East Tournament? Probably, but whether they make a run in either is both contingent on how the Orange play and how other teams in the brackets managed to jump the walls at the asylum.


Are Syracuse players aware that a shot from 5 feet behind the three point line counts the same amount as a shot from 1 inch behind it?

You can try and date the prom queen or the third trombonist in the marching band. Only one provides an interesting morning after pill story.


Let's take a moment to recall that Otto Porter performance at the Carrier Dome. Please share your recollections of its majesty since you were there. What was the atmosphere like in the Dome before, during and after?

First, a picture of where I was forced to sit for this piece of shit game. 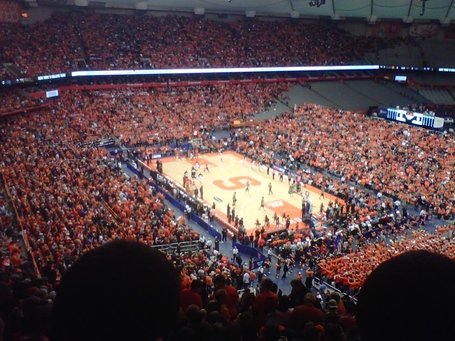 Does Syracuse know who I am? I'm a blogger, okay? I shouldn't have to sit all the way the fuck up there like someone that doesn't have an incredible Internet resume.

As for the atmosphere, it was bonkers. 35,000 people for a regular season basketball game is an obscene amount of people, and they were everywhere, all the damn time, before, during, and after the game. There was definitely a buzz on The Hill before the game -- we were up on Marshall Street around 10 or 11 for pregame beers and joints were packed all over the place. I probably got into the dome around 3:00 -- I never walk in that early -- and there were probably around 10-15,000 people already in the gym (which, I guess, is like three basketball games worth of people at the Verizon Center). Everyone was kind of in their seats by 3:45 and stuff was building.

And then Syracuse and Georgetown played a miserable first half of absolute basketball tragedy and nobody should have won. Then Porter happened. Then I went out and drank beers and watched a minor league hockey game where I was given free cookies and ice cream. So, yeah. Cool day, but I'm not going to one of these 35,000-people games again.


Did you know that the Syracuse Office of Athletic Compliance is in Manley Field House?

Do you know the worst part of you getting the C&D letter? People sending me email after email asking if I was the one that a) wrote the C&D or b) told Syracuse to send it or alerted Syracuse to it. (I, of course, did neither.) Because Casual Hoya is a clear violator of governing authority, I'm the one that had to deal with the bullshit. Once again Georgetown is blaming its problems on Syracuse, just like conference realignment.

Rumor has it that you will be in DC for the game. What are the chances you make an appearance at the 4th Annual Casual Extravaganza? If the Hoyas win will you chug some CasuALE with us?

This was true . . . until yesterday. As I think some people know, I work in an industry that is a little hectic this time of year. The plan was to head to D.C. for the game -- either for the weekend or a down-and-back on Saturday from New York City -- but that isn't going to happen. My stupid clients want stupid things from me, and my desire to watch Boeheim kick a Thompson in the teeth one more time doesn't mitigate that situation.

I was actually looking forward to the Casual Extravaganza and some CasuALE. Maybe we can Skype over a big screen or something. Or, at worst, let's try and get something together for Big East Tournament.


Final score prediction for this game?

Not good and ugly, just like your mother, the Hoya.


Assume that this is the final time we will face off in over a year. Please use the space below to get off anything that has been on your chest:

I'm really going to miss this nonsense. I really am. I'm a college hoops guy to the core, and when things like this end -- not just the games, but the strained camaraderie between fans -- it sucks. I'm going to miss doing stuff with you and Hire. I'm going to miss writing jokes about Georgetown that aren't really about Georgetown (or even about basketball). I won't miss commenters that think they're funny, writing not funny things below pieces that I've written that are funny. That I'm sure of.

The sad part about all this is that both Georgetown and Syracuse are looking at their futures and saying, "Well, this will be better anyway." A lot of people are wrapping this in the idea of divorce or breaking up with your girl/boyfriend, but I think that's off. It's more like being estranged from your brother who you used to fight with all the time, him working in L.A. and you working in Boston. You'll see each other occasionally, but there's only stupid reasons keeping you apart.