Your Fighting Hoyas of Georgetown need just one win in its final two games to grab a share of the Big East regular season title and clinch the top seed in the Big East Tournament, and the first chance for the Hoyas to do so is tonight against Villanova. As usual we here at the AWARD WINNING GLOBAL PHENOMENON are bringing you everything you need to know about Georgetown's next opponent, and special thanks to our bros at VU Hoops for providing answers to our hard-hitting questions. Gents, this bomber of CasuALE is for you. When you're done reading this, check out our answers to their questions HERE. Let's do this!

Villanova fans famously stormed the court after consecutive wins against Louisville and Syracuse earlier this season. Now, with an NCAA bid likely at stake against Georgetown, do you anticipate yet another court storm should you win? Speaking of which, what's your take on the whole ‘court storming' issue?

I would tend to think that, at this point, the students have the court storming out of their system, but even if they haven't, they still won't. I can say that with some certainty because they're all on Spring Break this week and I don't anticipate that many of them will show up for the game at all. If the ancient alums who occupy their seats for this one feel like reliving past glories and rushing the court, however, they have my support.

I'm pretty libertarian on the issue of court storming. I think that all of the sets of "rules" for when it is and isn't appropriate are written by people who probably hate all forms of fun. As long as nobody gets hurt and there is something to celebrate, get on out there, kids.

Jay Wright is famous for his stylish ways and you guys do a great job of chronicling as much on a game by game basis. Any thoughts as to how Dapper Jay rolls against Georgetown? Might we be treated to a pocket square?

Jay Wright is absolutely going to wear a three-button jacket and a pocket square (which may or may not match his tie). He tends to go with darker color suits, but he does have some light grays as well, so maybe he'll surprise us. If I had to bet, my money would be on a navy blue suit with a white shirt, red tie and a white pocket square.

So the New Big East is shaping up to be pretty awesome. Care to retract any of your January whining and chicken little rants over at VU Hoops that the Conference was destined to fail?

Villanova is squarely on the NCAA bubble and Marquette and Georgetown are the only Big East Catholic schools likely to make the field of 68 this month. Of the new "reinforcements," Butler is likely in, Xavier is out, and well, we're not really sure how many more schools there will be or which schools at this point.

What we can be sure about is the fact that this conference will be replacing national-championship caliber programs at Louisville, Syracuse and UConn with one two-time runner-up and another school whose basketball "history" really only started in the 2000s and has never been to a Final Four. The new Big East won't have any program that has cut down the nets at the Final Four since 1985 -- that's right, Villanova is the most recent national champion in this group -- and that's a big step back from a league that could send 11 teams to the dance and won titles in 1999, 2003, 2004 and 2011.
The reality is that Fox Sports bought these schools with an obscene offer, and hopefully that money will go to the right places, but Villanova, Georgetown and Marquette need to turn into NCAA Tournament beasts if this league is going to get the same respect that the old Big East could. One Final Four every 15 years or so isn't "pretty awesome," it's "pretty A10."
Are schools like Dayton and St. Louis going to be enough to boost Georgetown and Villanova's RPI high enough to secure tournament bids? Will they play well enough when they get there to rack up the piles of NCAA Tournament shares that the old Big East made it's money on? Does it matter that people aren't used to watching college hoops on Fox?

The point is: there are still a ton of questions out there. I won't retract any statements I've made about the new league, except my early belief that no broadcaster would be crazy enough to pay out $3-4 million per school for just hoops. Obviously Fox was, but indications seem to suggest that they were bidding against themselves. That cash might be the saving grace of these programs, and if things go well, you will have to thank Rupert Murdoch for opening his corporate wallet -- but it's no guarantee. Seton Hall and Providence have been earning obscene money compared to the rest of college hoops for decades and that hasn't stopped their hoops programs from nosediving.
Money is part of the equation, but it isn't the only variable.

Is any other broadcaster going to come close to what Fox Sports is offering the new Big East? It doesn't seem that that will be the case, so yes, Fox is the answer. The Speed Network, which will become Fox Sports 1, is number three or four among sports broadcasters already at the moment with distribution to over 80 million households. That's still at least 20 million households less than what ESPN and ESPN2 offer, but it is light-years ahead of the distribution for NBC Sports Network and CBS Sports Network.

Fox has a track record of shoving itself into crowded television markets and succeeding, with their broadcast network, Fox News, FX, and other channels. If Newscorp wants to take on Disney's ESPN, they have the background to do so.

Settle this Philly debate for once and for all. DiNic's roast pork sandwich or a cheesesteak anywhere? 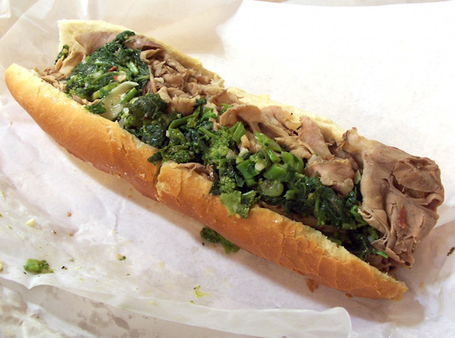 Has this Villanova team met your expectations this season? Exceeded them?

I think they've exceeded my expectations. In a year like this with some major turnover at key positions, I don't tend to form a real expectation until after the season started -- and they started sloooowww this year. Knocking off Syracuse and Louisville were great wins that I don't think anyone in "Nova Nation" could have seen coming.

Does Villanova deserve to be included in the Field of 68? Justify.

Assuming no additional wins before Selection Sunday: No. If they get another quality win and maybe one or two in the Big East Tournament, I wouldn't say they were undeserving of a lower seed. They've beat some good teams this season and they can win some tough games. They can also lose some head-scratchers. They really are a bubble team, and I don't think anyone should be surprised either way.

Is it safe to say that Mouphtaou Yarou never lived up to his billing as a Wildcat? Relatedly, it seems that freshman Daniel Ochefu has struggles as well. Is there something to Jay Wright's inability to develop bigs?

I don't want to agree with that statement, but it might be true, particularly since Yarou was expected by many to become a back-to-the-basket force underneath. In reality, he's much more comfortable facing the basket. As a rebounder and a defender, though, he has been pretty solid as a senior and I don't think anyone can be disappointed with that. Ochefu is still pretty young and I'm not prepared to pass judgement on him as a player.

That said, Villanova's bigs have always developed more in the face-up game than otherwise, but guys like Dante Cunningham and Will Sheridan developed into pretty front court players. I'm not sure whether it's something Wright is doing or not, but Villanova bigs grow up differently.

Who are some of the ‘Cats that are going to cause the Hoyas fits tonight?

Ryan Arcidiacono, Darrun Hilliard and JayVaughn Pinkston are all key players for the 'Cats. When Hilliard is on, he can tear up a defense and he's one of the teams' best shooters. Pinkston and Arcidiacono are both great volume-scorers and either one can put up a big number on any given night.

Pinkston in particular is a tough match-up for most teams. His combination of strength, athleticism and handle allows him to play out on the perimeter or post up against a bigger player. He isn't superman, but when he's motivated, he can give any team a scare.

The problem with all three of these players is that they're still learning the game and they have had their ups and downs this season. When they made the right decisions, they're superstars and when they screw up, they look like any old freshman.

Have you enjoyed riding Georgetown's ‘Catholic 7' coattails this season as much as we have enjoyed carrying you on them?

Loved it. How excited are you guys for more of that in the New Big East?

If Villanova lets Georgetown take wide-open shots from the perimeter all game, the Hoyas are going to win. If Villanova ditches their "help" defense and covers the perimeter, I think they will have a chance to get ahead and take a win.

I don't do score predictions, but, uh, take the under.