Big thanks to the @eriebayhawks organization for giving me an opportunity. Now headed to New Orleans for another great opportunity!

After signing with the New York Knicks in training camp, Sims was allocated to the Erie BayHawks of the NBA Developmental League where he averaged 17 points and 9 rebounds with this season and was named to the D-League All-Star team. The Hornets, who defeated Greg Monroe and the Pistons last night (Monroe had 27 points and 10 rebounds in the loss, by the way), had a roster space to fill after center/forward Jason Smith was lost for the remainder of the season yesterday to a torn labrum in his right shoulder. Sims could see his first minutes of NBA action as soon as Monday night against the Orlando Magic.

The Hornets have been a frequent landing spot for Hoyas in the NBA recently, as both Patrick Ewing, Jr. and DaJuan Summers have played for the bees in the last few years, Chris Wright was on the team during training camp and Austin Freeman was on the Summer League roster.

A big congrats to Henry on making his NBA dream a reality. 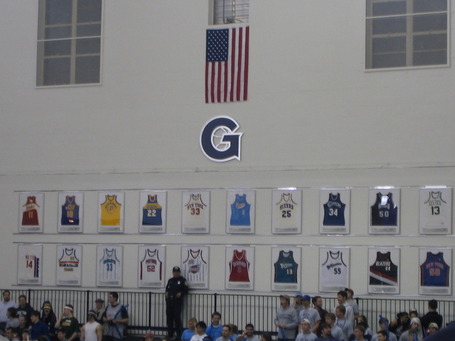