Sleeping with the Enemy: The Bearcats of Cincinnati

Under the covers with the Bearcats

Share All sharing options for: Sleeping with the Enemy: The Bearcats of Cincinnati

Big East Tournament time, baby! As the Hoyas get set for an afternoon delight at Madison Square Garden against the always pesky Cincinnati Bearcats, we here at THE GLOBAL PHENOMENON are bringing you everything you need to know about Georgetown's next opponent. With here as Big East buddies for the last time are our friends at Down the Drive, your source for all things Bearcats on the internet. Gents, these kegs of CasuALE are for you. Let's do this! 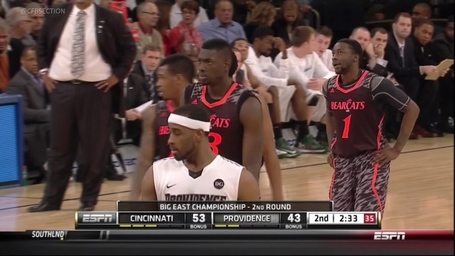 I. HATE. THEM. Hated last year's version as well. However, I don't have to wear them and if they players like them (as they say they do) AND they win, then I don't really care. But they are hideous.

Last time we chatted you admirably defended the Cincinnati chili, but now we're in New York and the stakes are a bit raised. If you had one dinner in NYC, where would it be?

I love New York style pizza, so it would no doubt be at one of the million hole-in-the-wall pizza joints...stomach ache be damned. And for the record, I had some good-luck Skyline before today's game. But unfortunately (for my Bearcats) I cannot eat it two days in a row. 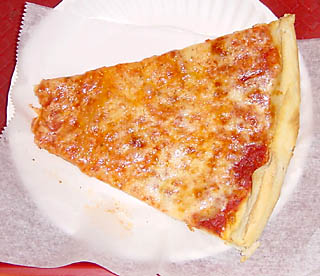 The Bearcats were reeling entering the Big East Tournament, slipping closer to the Bubble with every loss. Now that the 'Cats are likely in the Dance regardless, do you have any hope that this veteran-laden team can maybe make a run to the Sweet 16?

Honestly I still don't think they have it in them. Cheikh Mbodj has played well of late, but the inside game is still woefully lacking. And on offense they go through the most frustrating lulls. So no I don't have much hope for a sweet 16 run.

America 12. You must be psyched! Are you looking forward to your budding hoops rivalry with Houston?

Ummm no. The sooner we can get the hell out of that god-awful league and onto the ACC the better. I truly believe UC is not long for the America 12 or whatever dumb name it will be called.

What or who specifically do you attribute Cincy's late season slide to? Are Cincy's guards just not as good as advertised? Cronin get a case of the coaching zips?

Cashmere Wright's knee injury has severely stifled this team's offense. Your readers thought I was playing up Cash's slump in our last Q&A, but sadly it has lingered. He seems to be coming out of it a little, but he has admitted to his confidence being low right now. Also, the lack of a true low post scoring option has really hurt the balance of the offense. When you're relying on basically three players (Wright, Kilpatrick, and Parker) to provide your scoring, it's going to be rough to consistently win close games.

In our matchup earlier this season, Jaquon Parker proved to be the thorn in Georgetown's side, going off for 15 points and 6 rebounds. Has Parker become the Bearcats' go-to guy or does Sean Kilpatrick still have something to say about that?

Kilpatrick is typically still the guy. However, Parker played very well in the Providence game and single-handedly pulled out the South Florida near debacle. Bearcat fans hope and pray the Parker who willed the team to the sweet 16 last season is back to do the same this season.

You undoubtedly saw at least highlights of Georgetown's dismantling of Syracuse on Saturday. How awesome was that!

It was impressive no doubt. The Hoyas are playing some outstanding basketball at obviously the right time. I don't have high hopes for UC pulling the upset tomorrow, but they've beaten the Hoyas quite a bit over the last few years and had a late lead in Cincinnati a few weeks ago. But as usual, the Cats couldn't make tough shots late and it killed them.

Can't see the Bearcats pulling this one out. They just don't have enough firepower to beat a team Georgetown's caliber. But I'll say they keep it close. Hoyas win 60-54.