Sorry for the wait, folks! After the Hoyas layeth the smaketh down on the St. John's Candy Asses for the second time this season and what seems like 100th time in a row last Saturday, I've been a tad busy making excuses for why I couldn't produce this batch of Casual Awards the very next day. Ooh, Casual, Jr is crying! Ooh, I need to get the dry cleaning! Ooh, I need to get some Sleeping with the Enemy questions to Jon Rothstein! Ooh, I need to cut my nails! Ooh, I need to tweet some stuff! Ooh, I need to walk Teddy! Ooh, I need to have a final non-documented lunch with Hire Esherick while he was still in New Orleans! ANYWAY, here you all go, and thanks for your collective complete and utter lack of patience and understanding.

The Chris Wright Heart of a Champion Award:
Nate Lubick. Nate Lubick was everything against the Johnnies: 16 points, 10 rebounds on 8-10 shooting plus 4 assists and 2 blocks for good measure! If this Lubick is the Lubick that is here to stay for the rest of the season, Georgetown is in excellent shape going forward. Thank you, Captain Obvious! Well, you're very welcome!

Every Game Should Be A Damn Gray Out Award:
Why does it take a special occasion like a Gray Out to get Verizon rockin' and rollin'? Game looked great from my casual perch at a bar in New Orleans and the student sections looked like a lot of fun. Good work, but let's have this kind of presence ALL THE TIME.

via Hoya Saxual via RileysDressLikeAHoyaJersey

Ouchies Award:
Feel bad for Johnnies guard Jamal Branch, who unfortunately had Lubick fall on his ankle underneath the basket. It's never casual to see kid's get hurt, and I'm glad to hear that it's a sprain and not something worse, since when it happened I was convinced it was broken. And with that I give you Dr. Julius Greenbaum. Doctor? Doctor.

Tim Gunn Fashion Award:
Would it kill Steve Lavin to wear a fucking tie? It's bad enough that we don't have a dimmer switch at Verizon to class up the joint, but Lavin's tooling around the sideline in a suit with no tie made it appear that he was just coming from a casual dinner and his poofy hair was nearly walk-of-shame quality. Contrast that to our JT3, who was resplendent in a gray suit and dressed to the 9s as usual. We win!

Damn it feels good to be a gangster. Every time I watch this I get a little bit more in awe of the awesome. From the distance Bowen comes from to start his leap of faith, to the actual distance of the leap of faith itself, to the two-handed rim-rocker over a hapless JohnnyCake, and then punctuating it with a flex pose for the camera. Also I like DSR putting his hands up after the slam like "OK, Aaron Bowen, you're a bad man!" Just great.

Swag Award:
We have managed to avoid Omar and re-up the supply of Casual Headbands. 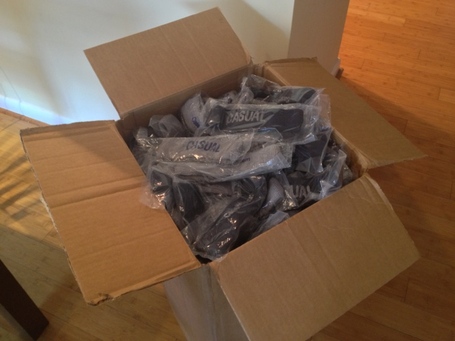 Rocky Balboa Award:
Now here this, all future Hoyas opponents! If you are going to throw the ball in Jabril Trawick's face you should expect retribution thereafter. Nice to see Bowen and Trawick getting in the face of a few Johnnies after the game ended. These Hoyas aren't backing down from anyone. Jabril played one of his best games as a Hoya, by the way, finishing with 12 points, 5 rebounds, 4 assists, 3 steals, and made all 4 free throw attempts.

Speaking of Free Throws Award:
I was really hoping for Georgetown to win this game without going to the line a single time, but thanks to the Johnnies for those unnecessary fouls in the final minute from ruining my hopes and dreams.

Big Man U. Award:
What! A Mikael Hopkins sighting! With St. John's draped all over Otto Porter early, it was Hopkins who got the Hoyas started with a couple of nifty baskets in the paint. Hopkins finished with 8 points, 2 rebounds and 3 blocks in 25 minutes. Not bad! By the way, the Bradley Hayes Watch for his first basket this season is officially ON.

Combo Guard Award:
DSR continues to struggle from the field, but I love the rebounding that he brings to the table. After grabbing 6 boards against the Hall, DSR had 8 against St. John's.

Well, That was Fun While It Lasted Award:
John Caprio provided a nice spark off the bench to save our season against Seton Hall, but JT3's move to put him in the game for the final minute of the 1st half against St. John's didn't work out to well, as Caprio fouled a Johnny while he was shooting a three resulting in two free points heading into halftime.

Jon Rothstein Award:
Rothstein did a great job as our very special guest star in this week's SWTE feature, and since he believes the Johnnies D'Angelo Harrison is the top scorer in the Big East, extra props to Georgetown's defensive effort in limiting Harrison to two points and not a single field goal. The Hoyas have now completely shut down Louyisville's Peyton Siva and Harrison this season, and I can't wait for the Michael Carter-Williams lockdown to begin on February 23rd.

Fruit of the Week Award:
Banana. Banana wins this week in a close battle over the Satsuma. 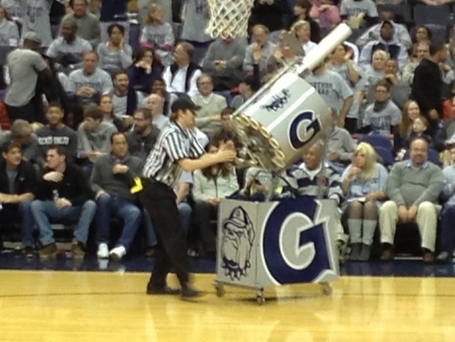 This Dude is a Hero Award:
The Super Bowl attracted a number of people to the great city of New Orleans last weekend, and among them was this guy! 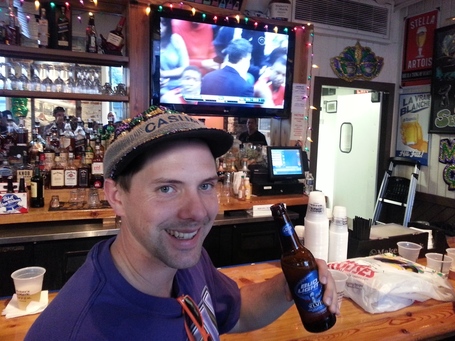 Why should you care about this guy? Well, for one he's a Hoyas season ticket holder. Two, he wore that hat all day. And three, he kept screaming "NATE LUBICK!" throughout the duration of the game. Best guy.

Jim Nantz Award for In-Game Commentary:
Once again, Aaron Bowen has taken over the planet:

Somebody find out if CBS posts a replay online

Otherwise…it ain’t gonna be me

AB is a man's man

is my other boyfriend

Who will sex Airbow tonight?

The line is forming to the left.

Please remember that he needs his knees. If y’all use him to the point he needs carpal tunnel surgery on them, it risks the season.

Aaron Bowen is the best

Shades of PE2 against BC?

PE2 was reverse jam no?

Been a few years since I pulled out that DVD

PE2 had the reverse dunk against BC

Which was a completely unnecessary risk with a minute left in a one possession game….but man was it a badass play.

As if I needed to ask who did that.

But watching that dunk by Bowen from that angle was pretty sweet.

Aaron with the power!

He just looks like a guy who has absorbed and learned the past 2 years and now it showing it.

Is he considered a sophomore right now?

How many more years of him do we get?

First real above the rim Hoya since Victor Page. Discuss.

Or were they just memorable?

I remember too many missed dunks

to agree with this. PEJr all the way.

Bowen is better than my NBA Jam create-a-player

Bowen was in left corner at time of release

Does CBS post full-game replays online? If so, where?

i don;t believe so. count on espn highlights I think.

"Aaron Bowen flying in to bag his own groceries"

Who Are These Fucking Guys? Award:
The Hoyas are now 6-1 WoW (without Whittington) and currently sit at 16-4 overall and 6-3 in the Big East, comfortably in 3rd place and just a game behind Syracuse and Marquette. I have no idea how this is possible, but I am most certainly enjoying the ride.