Sleeping with the Enemy: The Scarlet Knights of Rutgers with Special Guest Star Jon Rothstein!

Share All sharing options for: Sleeping with the Enemy: The Scarlet Knights of Rutgers with Special Guest Star Jon Rothstein!

With the Hoyas on the shelf until Saturday's tilt at Rutgers, we here at THE AWARD-WINNING GLOBAL PHENOMENON figured we'd bring in someone special to dish on all things Rutgers and college hoops. Today please extend a warm casual welcome to Jon Rothstein, College Basketball Insider for CBS Sports Network and WFAN, who has provided answers to our hard-hitting questions. Mr. Rothstein, this bomber of CasuALE is for you. Let's do this!

Talk to us a bit as to how you got your start in this business and have established yourself as an authority on all things college hoops.

There's been a lot of different steps along the way. When I was in high school and college, I wrote for different publications covering competitive high school basketball and then eventually worked my to covering college hoops. I free lanced for a while and then was fortunate enough to get a really good opportunity with ESPN Radio in 2004 that opened a lot of doors. I went the radio route for a while but still maintained my presence in print and continued to build my rolodex within the basketball world. In 2007, I was hired by MSG Network in New York to cover college basketball and then after three years there, I moved on to CBS Sports Network. The process never stops. It's a daily thing to continue to read, watch, and learn about all the nuances inside the world of college hoops. I wouldn't trade it for anything. It's my oxygen.


A couple of years ago you felt that the Rutgers-Seton Hall rivalry was on track to be the next Duke - North Carolina. At this point conference realignment may prevent the Garden State rivalry from ever achieving that lofty perch, but what in your eyes makes it so special?

Haha, I never said that. I said that if there was a five-year period where Rutgers and Seton Hall were both regularly ranked in the Top 25, that then the rivalry could potentially develop into the Northeast's version of Duke-North Carolina. Someone told me a few years ago that if I wanted to do this job, I had to understand "the world within the world". What does that mean? It's real simple. College basketball has a tight circle. If you know who's who and what's what, you're okay. If you don't, it's hard to understand certain things that appear to be no-brainers in "the world within the world". This is probably one of those instances. What makes Seton Hall and Rutgers such a special game? Recruiting. New Jersey is the one of the most fertile states in the country for prospects. Every year, there's potentially 10-25 high-major kids in the state and that makes these two schools at the epicenter of everything. Just look at the last few years. Seton Hall was right there with Duke for Kyrie Irving and with UCLA for Kyle Anderson. Rutgers meanwhile, was close to getting Devin Ebanks and about 15 years ago, they nearly had Jay Williams. The talent in the state is off the charts. Those type of battles that happen on the recruiting trail only enhance the rivalry between the two schools. If they ever both got it going at the same time, it'd be incredible.


The three NY/NJ area Big East programs have all struggled of late, with St. John's seemingly ahead of both Seton Hall and Rutgers on the road to recovery. What do you attribute this to? What do Rutgers and Seton Hall need to do in order to get on the fast-track to success?

St. John's has recruited better and that's a credit to Steve Lavin. He brings a certain type of cache to the table because of who he is and where he's coached. Also, St. John's has more history and tradition than Rutgers and Seton Hall. It may not be 1985, but playing in Madison Square Garden and New York City still carries weight with teenagers.

I think Rutgers has made strides under Mike Rice and they've built a strong base with their sophomore class. People may not believe this, but there's not a better person for the Rutgers job than Mike Rice. You need someone there that's going to grind because it's a grind job. You're going to have to take JUCOs and transfers and develop kids by red shirting them. It's a process. Think about how hard it is to recruit to a place with no tradition and limited facilities. That's what Mike and his staff go through on a daily basis and they've already built a strong foundation for the program and they're only in year three.

As far as Seton Hall goes, I really think people need to take a long look at the level of talent Bobby Gonzalez had in the program right before he was fired. I know personally that Bobby wasn't the easiest person to deal with --- but he was getting the type of kids that you need to get to win at Seton Hall. You're not beating Duke, Villanova, or Georgetown for kids at Seton Hall. It's not going to happen. You need transfers, you need JUCO's. The thing is though, you can't take too many kids with the wrong type of character and that's where Bobby made some mistakes --- but the guy had three straight winning seasons before he was fired. He got Jeff Robinson, who John Calipari signed out of high school at Memphis and he got Herb Pope as a transfer. Seton Hall will never again have a power forward as good as Herb Pope, that's just a fact of life. For all those risks though, there was baggage, and that's what made it tough for Kevin Willard to get started in 2010. How do you recruit when there's such a bad taste in basketball circles around your program? It hasn't been easy. I think Kevin is one of the better tacticians we have in college basketball. Have you watched his team's play? They're always in the right spots on the floor. He runs great stuff to get his players shots. Seton Hall is an incredibly well coached team but they're undermanned. I think people need to be realistic when they talk about Seton Hall. You need to either get transfers or second chance kids or take under-the-radar guys and develop them. Louis Orr did it that way and went to two NCAA Tournaments in three seasons. They had guys like Donald Copeland, J.R. Morris, and Kelly Whitney. Those guys weren't world beaters, but they were players that were attainable when they were in high school and the staff at that time did a great job of developing them.


You seem to enjoy numerous fine meals and have a special place in your heart for NYC's Little Italy and Brooklyn's Peter Luger's. If you had one final meal, where would it be and what would you order? Relatedly, how come you don't document your meals like we famously do here at THE GLOBAL PHENOMENON

Angelo's on Mulberry Street: Capprese, spedini, and meatballs for the appetizer. Chicken scapariello off the bone for an entree with a side of rigatoni.

For dessert, I'd walk to the next block and hit up Ferrara's bakery. One lobster tail and some peanut butter gelato. 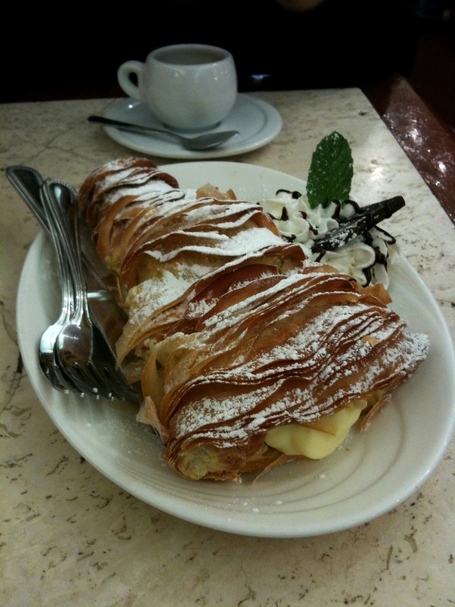 The Hoyas face Rutgers on Saturday, a team that just can't seem to get things going under Mike Rice. Given Rice's recent antics that led to a suspension, do you think he is on a bit of thin ice? If so, who do you think would be a good choice for the next coach for the Scarlet Knights?

I don't think Mike's on thin ice and his alleged antics aren't the problem surrounding Rutgers. The problem is the team doesn't have the mental toughness they need to win games in the Big East. Ask any coach in the league and they'll tell you that Rutgers is more than capable of being a dangerous team. They've got guards that can score and a solid crop of role players. The problem is, and this is unlike any other team that Mike Rice has ever coached --- they're not an exceptionally tough group. Until that changes, they won't be a factor in the Big East.


Though we spend most of our days analyzing all things Georgetown, what's your perception of the Hoyas program? Do you consider Georgetown to be an elite program under JT3?

JT3 replenishes talent as well as any coach in college basketball. Georgetown is always losing guys on an annual basis but they remain a constant because of one reason --- their coach. The Hoyas just haven't been good defensively the last two weeks, they've been outstanding. This is an undermanned team without Greg Whittington and they're still beating some of the best teams in the Big East.


Please reassure us that The Catholic 7 and the new "Big East" is going to be just fine.

The only thing I can reassure you these days is that realignment is going to continue. The Catholic 7 will be interesting for sure, but it won't be the old Big East and that's a tough pill for basketball junkies to swallow.

Tough to say without seeing the brackets --- but I'd be shocked if Florida isn't in Atlanta. They're the best team.

Rutgers always seems to pull off a home upset or two at the RAC. What makes it such a tough place to play?

It's a terrific home court. The stands are almost on an incline so the court itself feels like a giant pit. It takes some time for the crowd to get into the game because Rutgers hasn't been a perennial contender, but if it's a close game with 10 minutes to go, the RAC is as tough a place to play as there is in the Northeast.


For those unaware, you have become famous for your comparison tweets, with the formula "So much (insert player) in (insert player)." I find these entertaining, though for the life of me cannot understand your rather dogged insistence on comparing Otto Porter to a 2006 version of Boris Diaw. Now that you have more than 140 characters to explain that, please do. Assuming Boris Diaw never existed, what other players do you compare Otto to? Are there any other Hoyas that remind you of college or pro stars, past or present? 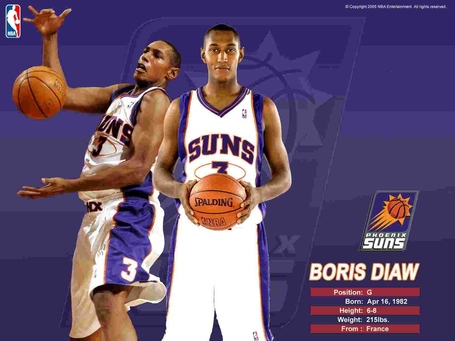 When Amare Stoudemire was out for Phoenix in the 2006 season, Boris Diaw became one of the breakout players in the NBA. He would regularly initiate their offense at the top of the key but also was more than comfortable posting up. He was an exceptional passer and could create opportunities for his teammates with his unselfishness. You can see the same traits in Otto. Otto does everything for Georgetown but like Diaw, he does it by blending everything together. He can rebound if you need him to rebound, score if you need a bucket, or find someone cutting to the basket. He's a special kind of player. Diaw has obviously put on some pounds since 2006 but the way Otto plays is a spot on match to how Diaw played during that 2006 season.


And finally, I'd be remiss if I didn't ask you this one. Please complete the following: "So much ______ in Jon Rothstein."