The Casual Awards: Otto and The Miracles

Share All sharing options for: The Casual Awards: Otto and The Miracles

Your Fighting Hoyas of Georgetown did the damn thang against UConn last night and as usual we're handing out hardware to those most deserving. Special props to our guy Ben Standig for coming up with the casual Otto and The Miracles moniker. Away we go!

The Chris Wright Heart of a Champion Award:
What more can Otto Porter do? Relatively quiet in the early going while only getting off one shot in the first half, Porter took over when he needed to, dumping 5 points on UConn's face during Georgetown's final three possessions including the game-winning layup with just seconds to go. In the 2nd half and both OTs, Porter was 7-11 from the field en route to another stellar 22 point, 5 rebound and 4 assist effort for the Big East Player of the Year.

Big Man U. Award:
In a game in which the Hoyas should have had an advantage inside against an undersized and undermanned Huskies frontcourt, the Hoyas were outrebounded 33-25 and got a total of 8 points and 6 rebounds from Mikael Hopkins and Moses Ayegba. After his breakthrough game against Syracuse, Moses only logged 8 minutes of playing time and it's clear that JT3 doesn't feel comfortable using him against teams that like to press the pace. Hopkins gets bonus points for the screen he set on Porter's final drive to the hoop.

Dickie V Award:
I like Mike Patrick and the enthusiasm he brings to the game, but his tendency to root for upsets came out in glaring fashion last night when he reacted to every UConn make down the stretch as if it were a volcanic eruption. I guess that's what he has to do to keep things exciting, but it was a tad over the top even for his standards.

He Who Shall Not Be Named Award:
UConn's DeAndre Daniels came out of relatively nowhere to nearly derail The Delusion Train, pouring in 25 points, grabbing 10 rebounds and adding 3 blocks in what may have been the best performance by an opponent against the Hoyas we have seen so far this season. Honorable mention here to the three-headed backcourt of Shabazz Napier, Ryan Boatright and Omar Calhoun who were tossing up ridiculous shots all night that were finding nothing but net.

Chores Award:
This one goes out to our heroic Blog DJ, who missed the end of the second OT as he took out the trash and the recycling and then went and did the dishes. What a guy.

DSR Is A Hero Award:
D'Vauntes Smith-Rivera. Kid was remarkable in the overtime frames, playing lockdown defense on UConn's pesky guards and hitting that monster trey to bring the Hoyas within one right after injuring his wrist while diving for a loose ball. Also, he's a freshman.

Dagger Award:
Dudes, what if that last attempt by UConn's oafish white dude at the end of regulation after Lubick's absurd pass actually went in and UConn scored 6 points in 3 seconds to beat us? That would have been something.

Spaceship Earth Award:
Why does the roof of the Gampel Pavilion look like fucking Epcot?

Positive Nosebleed Prognosis:
intrepid blogger hoyasincebirth took in the game at Gampel from these seats. 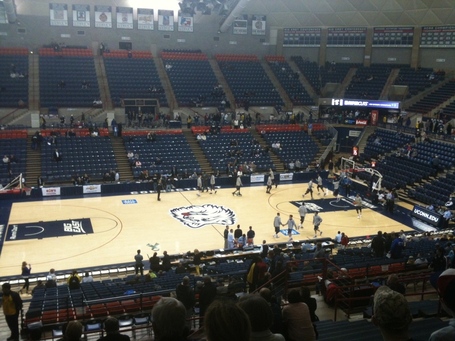 Hard To Hate Award:
This Kevin Ollie UConn brand seems so much different than Jim Calhoun's UConn teams. I mean, yes, the same shoddy recruiting tactics are undoubtedly still in place and these guys are all Calhoun's, but Ollie has them playing extremely hard and this is a very talented squad. Wouldn't surprise me to see UConn win the Conference USA Redux next season.

Road Warriors Award:
The Hoyas are 8-3 on the road/neutral sites this season and during this 12-1 streak have won true road games at Notre Dame, Cincinnati, Syracuse and UConn. Jeepers.

Adrienne Balboa Memorial Award:
We Can't Win! Georgetown can't possibly keep this up through March, right? I mean, SOMETHING HAS GOT TO GIVE, RIGHT? RIGHT?

We're Going Streaking Award:
The Hoyas are now 12-1 in Casual, Jr's lifetime, 10-0 since Blog DJ resurrected our season with his inspired choice of The Cranberries, 10-0 since JGD returned to the blog and commented in the Game Threads, and 9-0 since the purchase of this casual New Orleans Pelicans hat. As an aside, I noted with great interest that JGD only announced his presence on the Game Thread with the Hoyas "comfortably" up by 12 or so with just 7 minutes to play. Query whether he would have even commented had the Hoyas been trailing so as not to break his streak?

Thank Goodness We've Got Nike Award:
Check out Adidas' new postseason uniforms for the teams below: 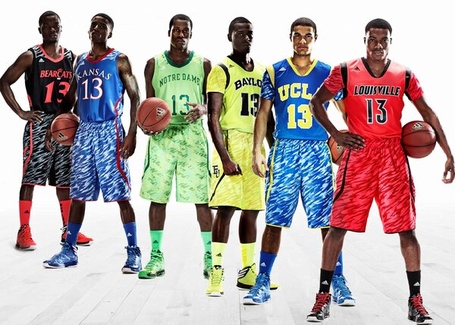 Jack Daniels Award:
In a world in which Georgetown and UConn can play a back and forth two overtimes, it's nice to have something stable you can count on. Again and again and again. 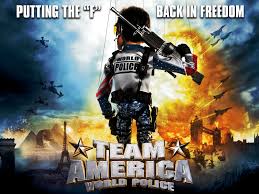 HOW DID THAT HAPPEN

OH MY GOD OH MY GOD

TAKE THAT WIN AND GET OUT AS FAST AS YOU CAN

How In God's Name Did we pull this off?

HOW THE EFF DID WE JUST WIN THIS THING?

"This is the end
Hold your breath and count to ten
Feel the earth move and then
Hear my heart burst again
For this is the end
I’ve drowned and dreamt this moment
So overdue, I owe them
Swept away, I’m stolen

Skyfall is where we start
A thousand miles and poles apart
Where worlds collide and days are dark
You may have my number, You can take my name
But you’ll never have my heart

(Let the sky fall, When it crumbles, We will stand tall x2)

Told you we were ok

FUCK AND YES I LOVE AMERICA

what the fuck happened?????

I just came in my pants

Time for that cigarette?

Big fan of #kstreet and the #firstplacenats!

SHUT UP ALL OF YOU

BECAUSE WE FUCKING WON

My feed was so bad, it looked like UConn had 79 points this whole time. I thought it was a tie and wondered why Otto was celebrating. HAHAHAHAHAHAHA!

I never doubted them for a second

can’t say the same myself

I can’t even celebrate

Watching the game feed at work on the West Coast

Biting my lip and trying not contain my shaking.

I am chewing on my shirt.

And saying the Our Father. This is something that I do not understand.

I'm sorry I was being sad and now I'm shaking and my heart hurts.

Anyone get the Chvotkin count?

each more breathless than the one before