Sleeping with the Enemy: The Huskies of UConn

Share All sharing options for: Sleeping with the Enemy: The Huskies of UConn

Your Fighting Hoyas of Georgetown are back in ball tonight and as usual we here at THE AWARD WINNING GLOBAL PHENOMENON are bringing you everything you need to know about Georgetown's next opponent. Special thanks on this bon voyage to The UConn Blog, your hub for all things Huskies on the internet. Gents, this bomber of CasuALE is for you. Let's do it, to it!

Aloha! Long time, no speak. How are things?

Things are good, or as good as they could be when your team is banned from the postseason because of an ex post facto ruling, you're 12-months away from having USF become your longest-standing basketball rivalry and you school is about to have no money thanks to Mike Aresco's masterful negotiating and conference building skills. But Syracuse has lost two in a row, so that's cool.

Kevin Ollie has obviously done a great job this year. Are you surprised that it took so long with UConn to reward him with a long-term deal? Are you still a tad dumbfounded that school even gave him a 1-year deal to begin with? Is Kevin Ollie the next great UConn head coach or was this season just a good run bolstered by one of the best backcourts in the country?

I'm not terribly surprised, as Jim Calhoun timed his retirement to force Ollie on an administration that was otherwise reluctant to hire him. I can understand the one-year deal too, as our AD is new on the job and this is his first high-profile stop (he came over from Buffalo last Spring). If Ollie didn't work out -- and it wasn't clear in September that he would -- heads would have rolled if he got a long-term deal. I was in favor of the one-year tryout to start, but from the first game it was clear he could actually coach, so we started up the "extend him" bandwagon pretty quickly. The school waited about a month longer than I would have liked, but apparently that was because they were waiting for the player's first semester grades to come in and be acceptable, so I'm fine with the delay.

As for Ollie being the next great UConn coach, it's early, but I'm exceedingly optimistic. He's a 100% UConn guy and has done a fantastic job motivating his team in a year when that'd be tough, he's also done pretty well at planning around some glaring roster deficiencies. The next big test is going to be recruiting. It seems like Ollie is going to be able to sell the program to anyone once he gets inside their living room, but his years in the NBA mean he's not terribly tied into the AAU network right now, so actually getting into those rooms might be tough for a few years.


In this post-Calhoun UConn world, what is the school's biggest selling point to recruits?

Ollie, easily. He's one of those "could sell ice to eskimos" guys, and just watching him from afar makes me want to run through a brick wall for him. He also scrapped together a long and successful NBA career that no one thought he could have (he had a lot of 10-day or one-year contracts and still strung together fifteen years in the league). He knows what it takes to make it in the league, and I think that's a compelling pitch to recruits.

How good are Shabazz Napier and Ryan Boatright? Are they both locks to return to Storrs next season?

Very, very, very good, and if both of them were three inches taller I'd imagine they'd both be wrapping up their careers this year. But since they're both a tad small for the NBA I tend to think both will be back. Boatright seems like a certainty to return because he's had a more inconsistent season. Napier is a tougher case. He's not going to grow three inches in the next year, and he projects as a late-first rounder now in a weak point guard year. Next year's crop of guards should be better and it's hard to imagine Napier playing much better than he has this season, so it might be time for him to cash in. With that said, Napier really seems to enjoy the college experience and be genuinely upset by the NCAA ban, so I could see him wanting to return for one more shot at tournament glory, even though he already has a championship under his belt.

In your opinion did Argo deserve to win Best Picture? How about that Jennifer Lawrence, generally? 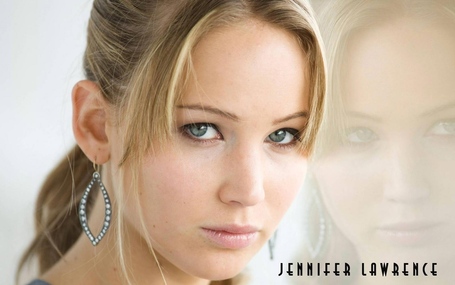 Eh, I liked Argo but was really bothered by the ending. I get the desire to ratchet up the tension, but the final chase down the runaway was just too much for me. Didn't the guards have a radio to call the tower? Seems like that'd be simple enough. Jennifer Lawrence is a gem. Did you see how she handled Nicholson?

What's your prediction for UConn in the Big East Tournament. Oh, sorry. Relatedly, are you OK with that punishment?

Nope. The NCAA ban bothers me because of the ex post facto stuff (quick history: UConn got tagged for the bad APR three years ago and lost scholarships as a result. Then in November 2011 the NCAA announced it was changing the tournament entry requirements, but imposing it retroactively. So in the years UConn put up the bad numbers, the numbers were still good enough to get into the tourney.) and because of the North Carolina shenanigans, which make it seem like UConn is being punished for being honest about its problems. If we had faked transcripts for the kids who did poorly we would have been just fine. Annoying.

I'm not wild about the Big East's argument for banning UConn either. First, they don't want an ineligible team winning the tournament and sucking up a tourney spot. That strikes me as unlikely -- how many years has the BET runner up missed the dance? Second, they think it would be embarrassing to have UConn win -- but the Big East is plenty embarrassing already, and more or less dead in the water. Why worry now?

Talk to us a bit about your view of the whole Big East - Catholic 7 thing and UConn's place in it. If you had your way, what conference would UConn be playing in two years from now?

The ACC, which looks like it's about five years and a handful of defections away from becoming the Big East circa 1998, along with a steady diet of Georgetown, Villanova and St. John's in the OOC schedule. It's frustrating to be left behind for now, but I can't imagine we've reached a stable place yet, especially if Maryland doesn't wind up paying $52 million to the ACC.

As for the Catholic Seven, congrats on your impending fortune. If this was fifteen years ago and UConn didn't have a football team, I'm sure we'd be marching along happily with you.

If I have one night in Storrs, CT, where am I eating and what am I ordering. Then where am I partying? 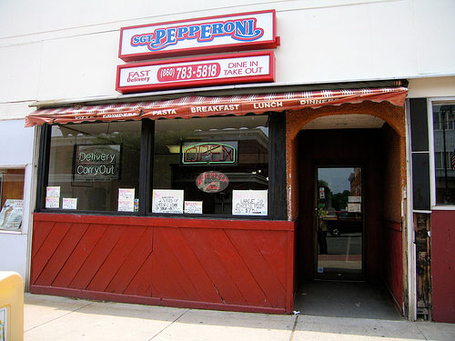 When in Storrs, do as the Storrsians do. via slice.seriouseats.com

You're grabbing a slice from Sgt. Pepperoni's Pizza, then you're partying at the Carriage House Apartments. UConn doesn't have much of a bar culture outside of Thursday nights, so it's house parties on the weekends, and the biggest ones tend to be at Carriage, which is kind of like a third world country with a solo-cup based economy. I'd never want to live there, but it's fun to swing by for a few hours.

Enough about you, let's talk about me. What is your perception of this Georgetown team and the job John Thompson III has done this season?

They seem good, very good, and Otto Porter scares me senseless. UConn's thin up front, and by "thin up front" I mean that they have only two big guys, both who of which would have been buried pretty far down the bench on almost every other UConn team of the past ten years. Porter is going to do terrible, horrible, no good, very bad things to them.

Other than Napier and Boatright, who is going to cause the Hoyas headaches tonight?

Omar Calhoun and (hopefully DeAndre Daniels). Calhoun has really come into his own over the past month and has become a dangerous complement to Napier and Boatright. He gives the backcourt some much needed size, and is about a year away from being a deadly shooter (now he's just very good). Look for Napier and Boatright to use their speed to get into the lane before kicking out to him on the wing.

Daniels is UConn's most athletic player (I imagine he'll spend a lot of time chasing around Porter), but he's very inconsistent. You'll know what kind of night it's going to be for him in the first five minutes. If he hits some early shots it's usually a great sign. If he struggles he tends to disappear for the entire game.

It'll be close, and I think UConn's homecourt advantage will have a lot to do with that (I think this would be a clear Georgetown win if it was played in DC). Pace is going to matter a lot, if the final score is 40-something to 40-something I expect the Hoyas to win, if UConn can get it into the 60s I'll feel a lot better. That said, while I'm afraid of Otto Porter I trust Shabazz Napier in all things. UConn 56 - Georgetown 55.

Oh, and please justify this against the job JT3 has done:

JTIII has done a great job and in a lot of years I think he'd be a favorite to win (Buzz Williams deserves to be in the discussion as well). With that said, I think the totality of the circumstances tilts heavily toward Ollie. He's a first-year coach who got tapped to replace a legend with six weeks notice. He's put together that replacement job with a team radically different from last years (four of UConn's six leading scorers left) and a frontline made up of baling wire and spit. Most importantly, that team has known all year long that it had no postseason to play for, and Ollie has kept it focused and gotten tremendous production out of everyone.