Share All sharing options for: The Casual Awards: DePaul DeVoured by D'Vauntes

The Fighting Hoyas of Georgetown vanquished DePaul last night by a score of 90-66, improving to 10-3 in Big East play heading into the monstrous showdown with Syracuse on Saturday. Before we flip the switch to start talking about the game everyone wants to talk about, here's some hardware for those most deserving. Away we go!

The Chris Wright Heart of a Champion Award:
D'Vauntes Smith-Rivera. Are you kidding me? The freshman sensation lit up the darkened Verizon Center scoreboard with a career-high 33 points on 10-12 shooting including 5-6 from three. DSR's 33 points are the most for a Hoyas freshman since Victor Page in 1996. That's a long time! Keep it up, my little precious Chris Wright/Austin Freeman combo. Just hope he saved something in the tank for the Carrier Dome.

Superdome Memorial Award:
Verizon Center scoreboard. So not only do we not have a dimmer switch to class up the joint, now we have a malfunctioning scoreboard to deal with. The damn thing went out during the game itself causing a crushing delay, and apparently the Hoyas beat the NBA trading deadline by acquiring back Jerrelle Benimon from Towson and Vee Sanford from Dayton. Sweet! 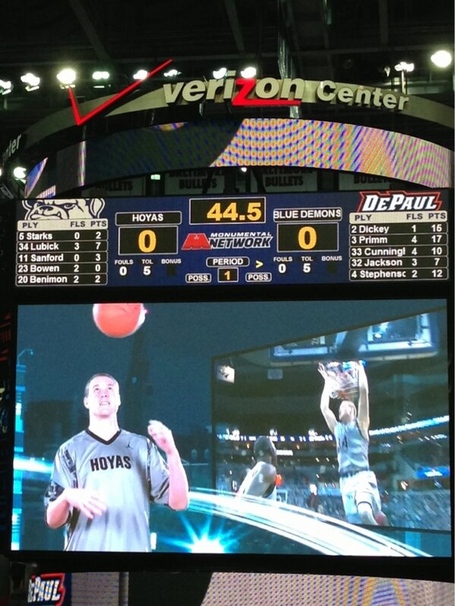 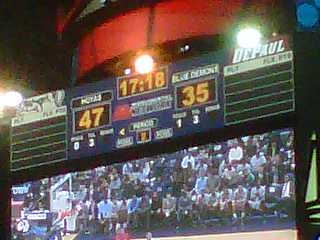 Big Man U. Award:
With so much positive coming out of this game it doesn't make much sense to dwell on any negative, so I'll just go ahead and suggest that Mikael Hopkins needs to be smarter about picking up fouls in the first 10 minutes of the game. Thanks.

Project Runway Award:
DePaul coach Oliver Purnell was given a technical foul during one of the commercial breaks and since the announcers were to busy chuckling together over nonsense I really never got the reason why. I have to think it was because of the atrocious sportcoat that he wore over a black mockish turtleneck. For shame.

Where's Waldo Award:
There's a Casual Headband in this picture: 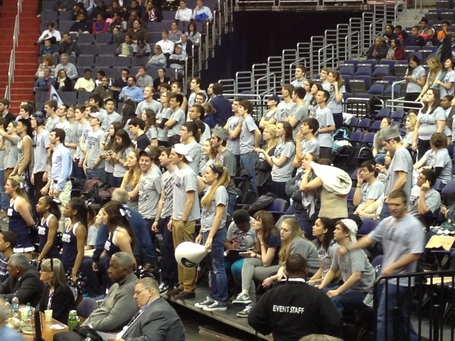 Chris Paul Award:
Markel Starks had an efficient 8 points and tied his career high with 7 assists in a steady 33 minutes guiding the Hoyas ship, but the narrative coming from the ESPN guys calling the game was that Georgetown doesn't have a true point guard. What a joke. Starks has developed into the perfect point guard for this offense and now in his junior season has indeed become that coach on the floor that JT3 needs.

Salvage Your Dignity Award:
Everyone's favorite t-shirt gating gun dude pulled out all the stops to reward the fans who showed up for the DePaul game, rolling out as...Super Hoya! Would have been easy for Gatling Gun Guy to mail it in BUT GATLING GUN GUY NEVER MAILS IT IN. 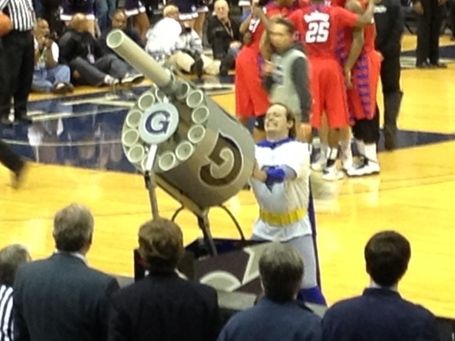 Why Bother With A Gray Out When You Can Have A Purple Out Award:
Ah, Verizon.

We're Going Streaking Award:
The Hoyas are now 7-0 after the purchase of this casual New Orleans Pelicans hat, 10-1 in Casual, Jr.'s lifetime and 8-0 after JGD's triumphant return to the blog and Blog DJ's inspired choice of The Cranberries to guide us through each and every Peanut Gallery post.

GIF of Awesome Award:
Aaron Bowen has become the Human Punctuation Mark with his penchant for throwing down slams at the end of games, and last night was no exception. This reverse jam captured in the GIF below is chock full o' tremendous for so many reasons:

1) Sneaky good pass from DSR to hit Bowen in stride

3) Reaction by Josh Smith at end of bench

4) Reaction by Jabril Trawick on bench

5) Reaction by random fan in Hoyas jacket on baseline

Living On A Prayer Award:
Dear Lord on High,
Please heal the knee of Otto Porter and please heal it quickly. May he continue to sky for rebounds, make copious amounts of baskets and continue to play for our Hoyas for this year (AND MANY YEARS) to come. In the Lord's name together we pray.

Dunking Otter Award:
I can watch this all day.

Jim Nantz Award for Casual In-Game Commentary:
Note: There were numerous candidates for Casual Awards in the 700+ comments, but if you weren't chosen below it's not because I didn't find your comment witty, it's because I need coffee badly and want to start focusing on Syracuse. Thanks so much for your kindness and understanding, and please continue to visit THE GLOBAL PHENOMENON.

And I’m by myself. Jesus. These announcers are really pissing me off.

If I weren’t relying on them to interpret the blurry mess that is ESPN3, they’d have been muted ages ago.

These guys think they are South Florida, hitting everything.

Or a Syracuse player on a date

Love how he made sure to bump shoulders after that basket. Brilly always acting like he want to hurt someone man.

coming in on the court?!

DSR is a FRESHMAN?

Just. Bring. It. via i.imgur.com