Guess who's back in the motherloving house with a big fat Q&A for your motherloving eyes! No rest for the weary here at THE AWARD WINNING GLOBAL PHENOMENON as we're rolling straight into Marquette coverage ahead of tonight's big game against the Big East leaders. Here as always to grant us a gander at all things Golden Eagles are our brothers at Anonymous Eagle, the best source for all things Marquette on the internet. Fellas, this CasuALE is for you. When you're done reading this, CLICK HERE for our answers to their questions. Let's do this.

I've missed you so. As your boy Bon Jovi once sang: "These five words I swear to you: Johnny used to work on the docks." Wait.

A LOT has happened since we last talked. How are things with you and your family?

Listen: I'm not one to brag incessantly about my kids on the interwebs; you won't see me on the facebooks and the twitters saying things like: "Skippy had a great BM this morning, blew through the pampers again LOL" or "baby girl tried to eat a fake plant, but realized it tasted like crap and found some Cheerios down her onesie instead, what a smart girl."

Still: I like to think we keep things pretty casual around here. #DocumentYourSnacktime 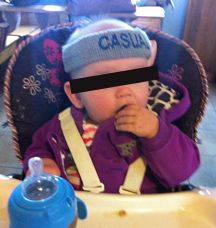 More importantly, what's going on with Marquette? 8-2 and 1st place in the Big East? What and who do you most attribute the great start to?

T'in' C of B, baby. You can look at the 8-2 start one of two ways, I think: Marquette is awesome and was seriously underrated after face-planting at UW-Green Bay, and they've proven tougher and more talented than anybody in the league figured coming into January. Vander Blue has been sublime, Davante Gardner has big smooved his way to 14 and 6 on a nightly basis, Junior Cadougan's been one of the top point guards in the league, save for a bad hiccup against Louisville. Throw in a couple of glue guys -- Juan Anderson, Chris Otule -- and you've got the makings of a pretty nice team.

The other way to look at it: we've gotten a little lucky, both in terms of the schedule and the action on the court. MU's played three overtime games already, beating UConn (after Cadougan hit a 30-footer with a hand in his face to force OT, and after Karl Hess robbed UConn of two points by sending the teams in the wrong direction after the OT tip) and Pitt (in a game where the Panthers lost Tray Woodall early) and losing to Cincinnati (after scoring like 16 points in the first half). We've already played South Florida twice (and no offense to our friends at Voodoo Five, but the Bulls appear to have given up on the season sometime in mid-January), plus Seton Hall and Providence and DePaul at home. In our only two games against the cream of the crop in college basketball, Marquette's been obliterated: by 30 against Florida, and by 17 at Louisville last weekend.

I know, right? It almost looked like we got together before the game and were like: "OK, we've shown people that the Catholic 7 can play butt-fugly, broke-as-shit on offense -- er, defensively masterful -- games, but we can fill up the scoreboard a little bit too. So maybe we give DePaul a few uncontested looks from three-point range, and even though they're DePaul, they'll make a handful, but the outcome will never really be in doubt, because again: they're DePaul, and they'll do shit like let one of their only big men pick up four fouls in six minutes of play in the first half, but at the end of the day, people will see they scored around 80 points and maybe they'll stop mocking our athletic director for bitching about how Tulane's RPI was going to drag down the Big East even though DePaul is like 40 spots lower than Tulane in RPI..."

I fear I've said too much.

It has been brought to my attention that you have recently received a bomber of CasuALE. Have you tested the fine brew or are you saving it like some sort of collector's item? Note that either answer is probably acceptable.

True story: took the family to Disney World for the kids' first birthday. Had an awesome time, highlighted by Rubette falling asleep as soon as we sat down in the It's A Small World boat and snoring through the entire ride and lowlighted by the Norway-themed ride at Epcot, where I was actually afraid that I was going to be held captive and made to watch skijumping videos for 45 minutes. ANYWAY, we arrived home to be greeted by a foot of snow, our car buried in the remote airport parking lot, and a week's worth of mail piled up on the front porch. I scooped up the bundle of old newspapers and Jos. A. Bank flyers and noticed a large package underneath it all, inside of which was 24 glorious ounces of CasuALE (and about three pounds of packing peanuts, which were a nice snack for Rubie Jr. and Rubette). All of that is a long way of saying: you are my moon and stars Casual Hoya and new best Internet friend Mark Girard.

I haven't sampled the brew yet, mostly because we've assembled a crack team of scientists to try to reverse engineer the stuff, like Brent Spiner and his wacky science buds were trying to do with the alien spaceship in Independence Day.

At the time I am sending you these questions, Marquette sits atop the Big East standings but is ranked behind Syracuse, Louisville, Cincy, Georgetown and Pitt. Do you think Marquette gets enough respect nationally? Do you care?

Probably not re: the national respect thing -- I think Jeff "The Bro" Borzello referred to Marquette as a "perennial bubble team" last week, which is kinda nuts because MU has made the Dance in each of the last seven seasons and was only really on the bubble in 2010-'11 -- but definitely not re: the "do you care?" portion, both because it's just reality -- we're a small, Catholic university in flyover country; how much coverage can you really expect? -- and because it's kinda fun to sneak up on people, like when we man-in-the-black-pajamas'd Cuse to get to the Sweet 16 in 2011.

OMG we're on ESPN tonight in primetime! What will you be wearing?

Same thing I wear for every game: my ten-year-old Crean's Cadre yellow t-shirt (it's lucky, shut up), my navy blue hoodie with the alternate Golden Eagle logo (because it was on clearance at the bookstore and my wife comes from frugal German and Polish stock), and whatever beer I'm drinking when Jim Burr and his prodigious fupa inevitably botch a charge/block call against Marquette.

Over at Anonymous Eagle y'all have an awesome feature called 'Adjective Survivor' in which you ask your audience to pick the best adjective to describe your rivals head coach. To jumpstart a similar soiree over on these parts, please give me 10 adjectives to describe Jim Boeheim.

Oh my. What a honor. Here's what we came up with off the top of our heads; and before you say anything, we know that most of these aren't proper adjectives, but grammatical convention has never been our strong suit:

The Great Enabler
Magoo in Real Life
March Magician
Mopin'
Cougar Tamer
Frumpish
Coach K's Cannon Fodder
Doddering
Dickish
And Mr. Kensington suggested "Doing Less With More Since 1976," but we couldn't figure out a way to condense that to one or two words.

Now that your expectations have changed from the beginning of Big East play, what finish to Marquette's season would you be happy with? Round of 32? Sweet Sixteen?

Hold on: who said our expectations have changed since the beginning of Big East play? Coach Buzz keeps telling everyone who will listen that Marquette isn't any good, and Coach Buzz always tells the truth and is much too country to have ulterior motives in what he says to the media, so I'm still just hoping we make the Tournament. I'd also like to beat Notre Dame because they're buttholes.

Can this Marquette team win the Big East Championship at MSG?

I honestly have no idea. Every time I think I have the Big East figured out, something happens like Notre Dame and Louisville playing five overtimes and Russ Smith missing like five potential game-winning shots, or freaking Villanova beats 'Cuse and Louisville in a span of five days and then loses at home to Providence, or Georgetown rips off seven wins without its second-leading scorer. At this point, the only thing that would surprise me is Seton Hall winning five games in five days, because I think Kevin Willard is kind of a dip.

I've managed to erase most of the first Georgetown-Marquette war crime from my memory, and I'm really hoping that I don't have to repeat that procedure after tonight's game, 'cuz if we both sit back in 2-3 zones and chuck three-pointers in the vague direction of the basket and fail to break 100 combined points again, then I have to drink a lot to justify watching and then going to work the next morning is a bitch. Vegas says Georgetown (-4.5) the last I saw, so I'll take the Hoyas to win but Marquette to cover, 66-62, in my CRUSH YOUR MAN special of the week.

The beginning of the movie Tommy Boy appears to be set at Marquette, and the Chris Farley character is in Marquette colors ripping bong hits and falling through tables. Do you enjoy weed? 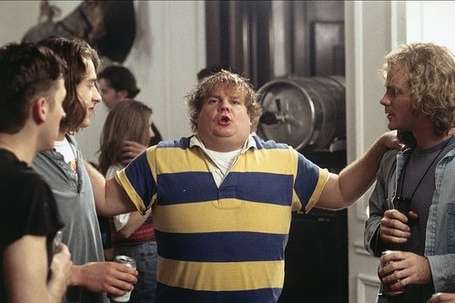 I can get a good look at a T-bone by sticking my head up a bull's ass, but I'd rather take a butcher's word for it.
via gorugby.files.wordpress.com