Under the covers with the Johnnies

Your Fighting Hoyas of Georgetown get ready to battle the St. John's red Storm for the second time this season, and as usual we here at THE AWARD WINNING GLOBAL PHENOMENON are bringing you everything you need to know about Georgetown's next opponent. Special thanks once again to Rumble in the Garden for providing casual answers to our hard-hitting questions. This bomber of CasuALE is for you. When you're done reading this opus, go RIGHT HERE and check out our answers to theirs. Let's get right to it!

Georgetown waltzed into MSG and crushed your souls on January 12th. Is there anything you took away from that matchup that gives you much hope three weeks later?

My people tell me Georgetown got shorter and defensively dumber. Is that not true? Then.... Jamal Branch got his shot off with ease in that game after the Hoyas gave up trying to eat the Johnnies' souls and has been a major part of the team effort since. (I thought it was more of a grinding, gnashing feeling than vise-like grip on the soul.)

PLUS! St. John's defense wasn't actually that bad. They held Georgetown to 45% shooting inside the arc and foced 16 turnovers. AND the Hoyas played at the Red Storm's fast pace! Moreover, the team has almost intentionally learned to play without fully depending n Harrison!

I say all those things because I cringe when thinking how the Hoyas will clown St. John's in DC. And about how St. John's only forced 8 three pointers as the Hoyas basically ran a practice for the second half.

We all know the Johnnies have talent. In fact, that blowhard Jon Rothstein suggested that behind Syracuse and Louisville that St. John's has the most talented roster top to bottom in the Conference. Do you agree? If so, how shitty of a job has Steve Lavin done?

Jon has a deal with the New York area coaches where they take him out for high-end Italian meals. He has to say things like that.

Technically, I think he's looking too much at the recruiting rankings. And i dont even know how we are determining "talent". Athleticism? Best depth of capable players? Guys who could get major run on any team in the league? Cutest smiles?

Marquette probably has more athletic talent. But I could see the Johnnies having the fourth-best raw athleticism in the conference, I guess. In terms of guys who'd play on other rosters right now, that's almost laughable... Until I think about how on another team Jakarr Sampson would be told that long twos with a foot near the line can be turned into threes very easily, or how other teams use specialists...

I don't think Lavin has done an awful job, but I think some players would have blossomed earlier under other coaches. But then, guys like D'Angelo Harrison and Phil Greene IV would chafe under a more controlling coach

Speaking of Lavin, is that whole 'Lavinwood' thing still a thing or has that worn off? 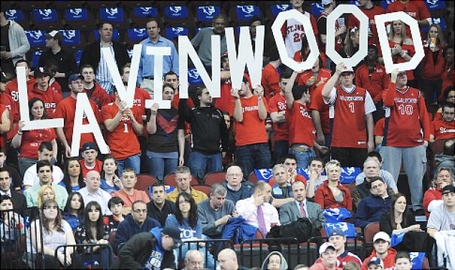 As long as there are kids and letters there will be a Lavinwood. I just realized that Lavinwood could also be an x-rated reference. I can't unsee that.

How surprised were you when Mike Dunlap was plucked by the Bobcats? That seemed to come out of nowhere, huh?

Yeah - assistants everywhere are trying to get on the NBA radar now. He hasn't been terrible.

You are a Johnnies authority that lives in Chicago, which makes you qualified to answer the following: which pizza is better, NY-style or Chicago style? 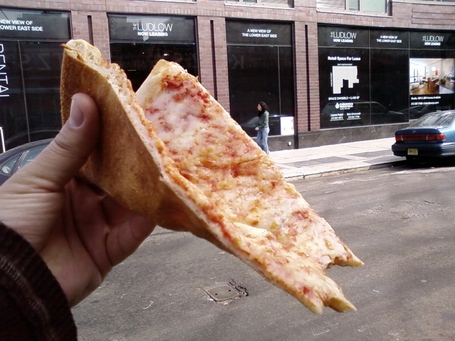 Still the King via opscotch.com

Chicago pizza is a goddamned abomination, a non-portable stew masquerading as a pizza, the worst of excess and grease, a Midwestern potpourri of fattening stuff that surprisingly doesn't include corn and isn't called "puppy chow" but made of Chex mix. Chicago style pizza is the ninth circle of pizza hell.

How excited are you for the Super Bowl? Any real rooting interest? Prediction? Please describe in great detail what kind of spread you intend to have at the Rumble Cave.

Baltimore is a character from that TV show the Wire, not a real place, and I dislike San Francisco. That said, I really dislike Ray Lewis and people who like Ray Lewis, so I will root against him like I root against the Yankees. I am a man filled with hate.

As for the spread, I have been invited to someone else's home to eat his wings. I kept hearing the word "vegetable" so I'm worried the eating will be healthy and sedate, as often happens with people who do medical or health research. The Rumble household has been tasked with making a dessert, so I will add all the butter I can get my hands on to what I bring. It'll slide down throats like kids on a slip and slide with a running start.

The Johnnies roll into Verizon on a 5-game winning streak. Where do you see St. John's finishing in the Big East and has that outlook changed from the beginning of the season?

I hope for the best, but I still see something like 15-15 or 16-14 for the season. The team has 14 wins already so that tells you what I think of their upcoming schedule. Of course, Lavin is good for a few upsets, so I'd revise it up to about 17 wins, which is a heck of an improvement.

Kate Upton has become an essential part of each Casual Game Thread, appearing after Hoyas wins in her glorious GIF form. If we were to shake things up and feature someone else, who would you suggest? 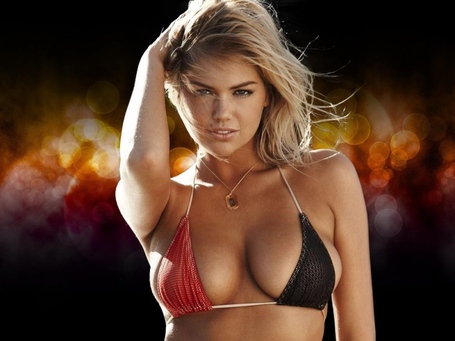 Still the Queen via losthatsportsblog.com

Rosario Dawson? But she doesn't dance for pervy photogs doing the Cat Daddy and doesn't dance in a way that makes me forget what I was typing. Are there any hot Hoya cheerleaders? It might be a nice pro-Georgetown bit. And if you find one, isn't it like locating the Loch Ness monster? Maybe you'll get a tenured professorship.

Or maybe I should have just suggested Natalie Portman.

This game will be on CBS and everyone at Verizon will be wearing gray as Georgetown has called for a 'Gray Out'. Does this intimidate you?

How do you see this rematch playing out? Final score prediction?

I think it's ugly at times and chippy and closer but still a Georgetown win. 63-57, and the national audience will ask "why do we want to see a Catholic League" if it looks like this?

Bonus Question: You idiots just agreed to play Syracuse for an additional two years. What the hell is wrong with you people?