The Casual Awards: #GivingTuesday and I Fried a Turkey

Share All sharing options for: The Casual Awards: #GivingTuesday and I Fried a Turkey

I've been asked by the powers that be at Georgetown who have recognized THE GLOBAL PHENOMENON's enormous reach to spread knowledge regarding what is being called #GivingTuesday at Georgetown, the University's annual effort to give back to the community.  Check out this link for everything you need to know about the effort and you know, if you're feeling up to it, give something.  It's cool and for a good cause.  Meanwhile, here's some hardware that we're handing out after Georgetown's blowout-that-seemed-much-closer-and-nearly-was-a-season-ending-disaster win over the Lipscomb Bison.  Away we go!

The Chris Wright Heart of a Champion Award:
D'Vauntes Smith-Rivera.  DSR is racking up TCWHOAC Awards like nobody's business, dumping 17 points on 6-10 shooting and 4-7 from three point land.  Not an overly impressive performance by any stretch, but it's enough to earn the TCWHOAC Award against the vaunted Lipscomb Bison.

Why The Hell Are We Shooting So Many Damn 3s Award:
Look, I have no idea, but in the awe-inspiring words of former Maryland coach Gary Williams who was somehow allowed into the building to call the game for Fox Sports 1, "You have to keep shooting if you're open. That's important for shooters."  Thanks, Gary.  Despite a massive size advantage, the Hoyas embarked on a three point shooting procession in the 1st half, hoisting shots from behind the arc with great gusto and making very few of them while Lipscomb battled its way back into the game.  The miss parade was led by Hoya "sharpshooters" Stephen Domingo and Reggie Cameron who combined to go 0-6 from three. Good things.

Quotable Award:
JT3 when asked what positives he took from Georgetown's performance in the 1st half: "Nothing."

Tim Gunn Fashion Award:
JT3 looked like this when he said that. 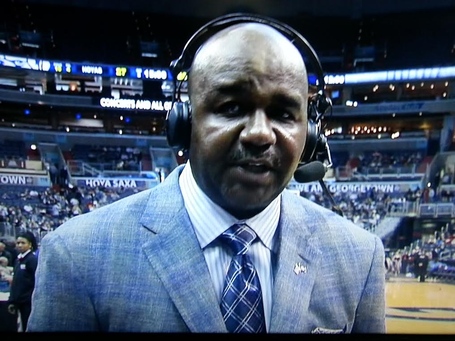 I, for one, applaud that fashion statement.  I couldn't pull it off - it's a bit loud for my taste, but I am always pro-fashion forward thinking like that.

Paul Walker Memorial Award:
Seton Hall Pirates.  In case you missed it, the Pirates lost to Fairleigh Dickinson, which also happened to defeat Rutgers a few nights earlier.  When FDU is the pride of basketball in New Jersey, it's time to either blow up the state or blow up basketball.  Seton Hall blows.

Document Your Lunch Award:
So this weekend I decided to fry a turkey and survived.  Today, we all win as a result: 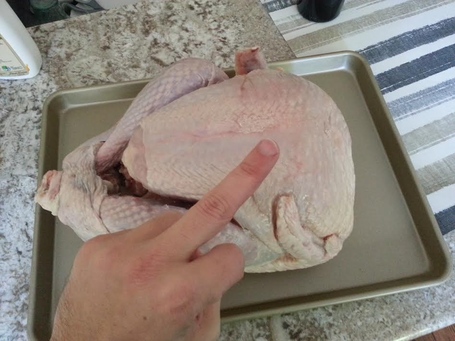 The turkey prior to its adventure 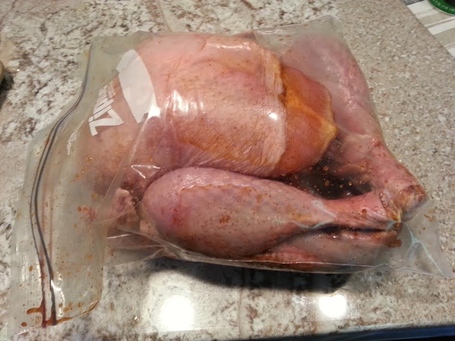 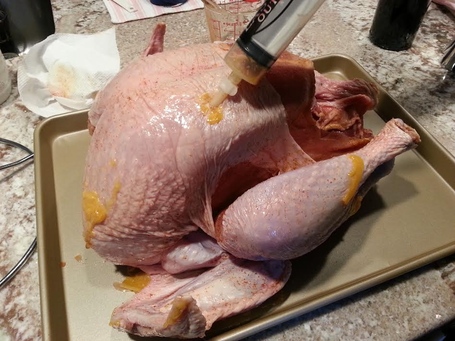 The turkey was injected with a cajun butter mixture 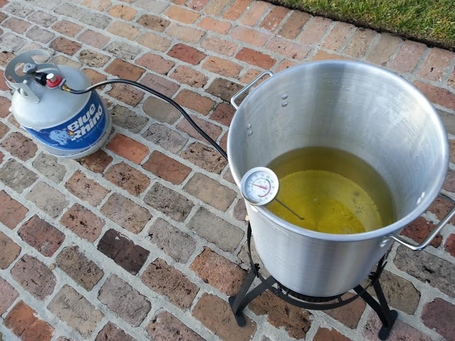 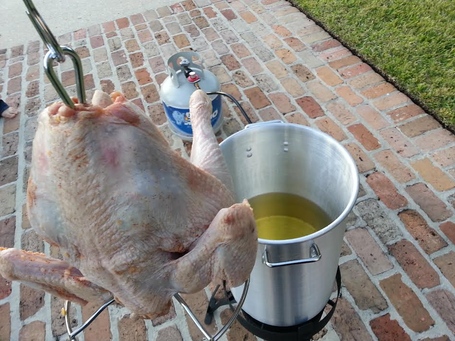 The turkey was then lowered into the vat of upside 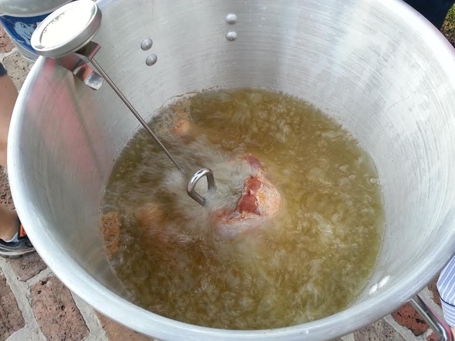 The turkey enjoying its bath 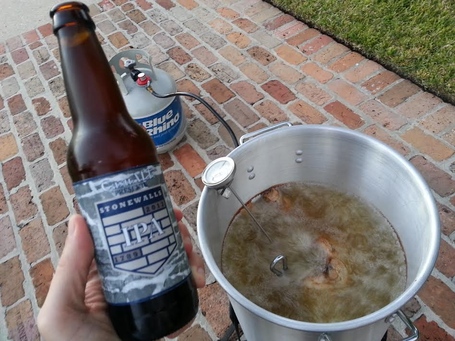 I am really enjoying the turkey's bath 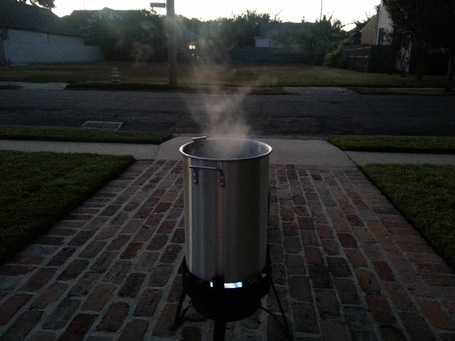 The steaming cauldron of upside 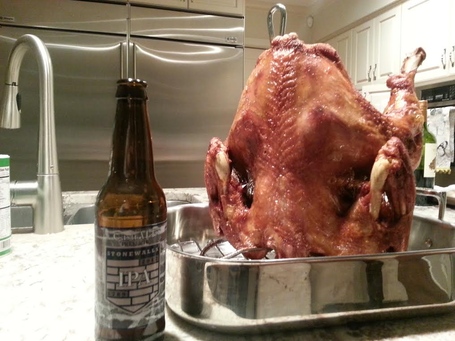 After 45 minutes, the turkey was removed and was resplendent in golden brown 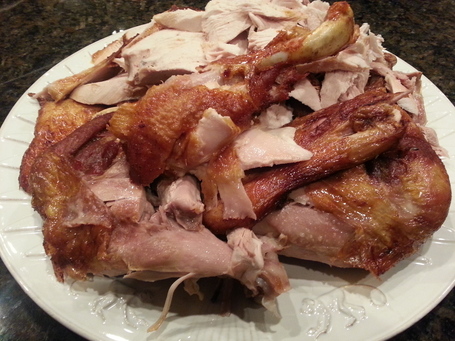 So moist and succulent

Fan of the Game Award:
This kid wins for obvious reasons. 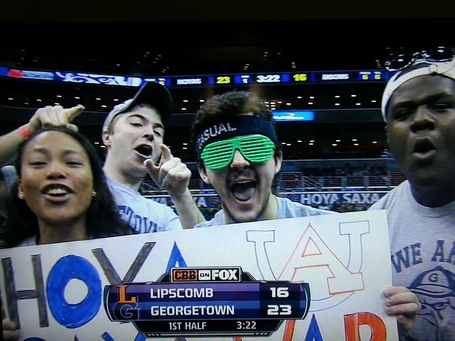 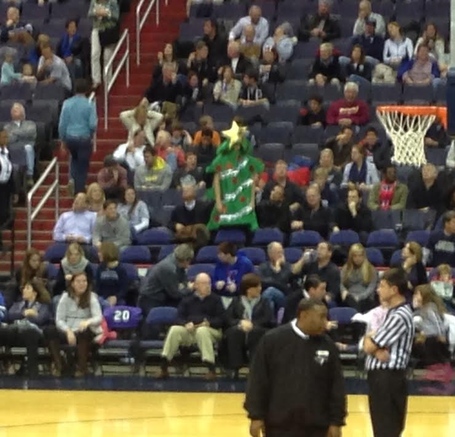 Lord Voldemort Award:
While watching the Hoyas dick around in the 1st half in the wake of the Whittington news, I couldn't help but wonder if this is just going to be one of those seasons where Georgetown struggles to make the Dance and all of us hate ourselves.  Maybe it was just my mood at the time, and certainly the 2nd half effort was nice to see, but I can't get excited about this team. Not yet, anyway.

Dude, What Are You Talking About Award:
Georgetown absolutely blitzed Lipscomb in the 2nd half, outscoring the Bison 43-23 and I have no reason to think this team can't compete for the Big East title with Starks, Smith, DSR as major scoring options and the depth off the bench.

Big Man U Award:
Josh(ua) Smith fouled out in 17 minutes against a team that had no one taller than 6'5", Moses Ayegba didn't even play, but thank goodness for Mikael Hopkins who awoke in the 2nd half and finished with 13 points and 7 rebounds to pick up the slack.

Why Didn't Moses Play Award:
My guess, purely based on speculation, is that he was Whittington's wingman in Puerto Rico when something happened that shouldn't have. 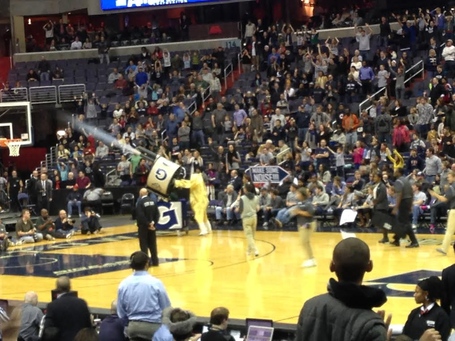 Two Words to Describe Just How Bad the Washington Redskins Are This Season Award:
So bad.

Fantasy Football Playoffs Time Award:
It's time!  Hopefully your squad has endured the trials and tribulations of the season and is ready to reap you rewards and glory in the postseason.  If you're having any lineup issues or have a start/sit question, I want to hear about them!  I really do!  Almost as much as I want to have a tree fall on my neck!

I hope there is a Smithquake at Verizon today....

Is a highly under-rated song. I celebrate his entire catalog. These are facts.

Appreciate it people. You know what, yea it fucking sucks that we just lost our most talented player with the most potential on this team. But appreciate this school’s willingness to dismiss him. Whatever reason he is getting dismissed for is his fault. Imagine if this happened at another school. Cuse? Kentucky? UCLA? You can bet your ass they would have tried to find a way to work around the system and let the player back. But not georgetown, there are standards and rules and Whitt did not live up to them for whatever reason. Appreciate those standars, and appreciate this institution. Whitt could not and that is why he will be gone

why am I watching basketball

bowen is 100% out of control on the court

kinda love it, kinda hate it.

We have 6:45 left in the first half and no one is currently in the bonus.

Huddled around the radio like we're playing during the Great Depression

Why are we shooting so many 3s?

I’m hearing that he tried to bite a kid

Every game is closer than it should be, no lead is ever safe, so fans can never change the channel.

But I can actually count the population of the student section. Thirty-seven, with 5 just sitting around. C’mon Hoyas.

did the blog melt down because of this Hopkins onslaught of points?

High Point is NeXt.