Sleeping with the Enemy: The Golden Panthers of Florida International

Share All sharing options for: Sleeping with the Enemy: The Golden Panthers of Florida International

Welcome back to the greatest feature on the internets!  With your Fighting Hoyas of Georgetown off to a mediocre start and the fanbase seemingly comatose during this otherwise festive holiday season, we're bringing back our friends at Mid-Major Madness for the final time to shed some light on Georgetown's next opponent, the Golden Panthers of Florida International! Away we go!

Before we begin, you guys over at Mid-Major Madness have helped us out tons with this feature during our non-conference schedule providing us answers to our casual questions with your endless coffers of mid-major knowledge. First, thanks! Second, do you want to take over for me here at THE GLOBAL PHENOMENON when I am dead?

I have always had a special place in my heart for Georgetown ever since I bought a pair of basketball shorts for $9.99 in Steinmart in High School, but I'm going to have to decline. It's nothing against you or G'town, but it's a labor of love and I just don't think I'm casual enough.

Tell our readers something about Florida International (the school) that we may find interesting.

I think the most interesting thing about FIU is probably their basketball court. 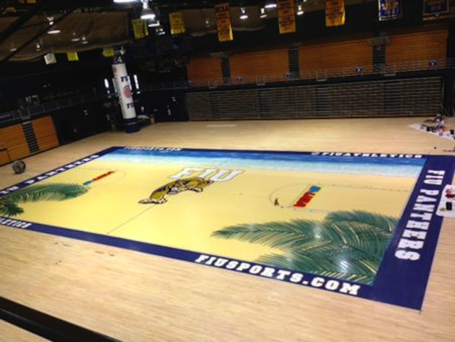 Also, as a Longwood alum, I keep a casual eye on the Golden Panthers since they hired Lord Voldemort, I mean, Mike Gillian as an assistant coach.

FIU was hit hard by APR penalties and it looked like Richard Pitino was going to be a promising, young coach for the Panthers. Pitino bolted and now they have former mid-major hero and Norfolk State head coach Anthony Evans at the helm. They have been an up and down team, even losing to a terrible Division II squad.

Who are some of the players on the Golden Panthers that Georgetown needs to be aware of on Saturday?

There are two guys I would keep an eye on, Tymell Murphy and Rakeem Buckles. Buckles came over from Louisville with Pitino and couldn't go to Minnesota this year. He is now a senior and averaging a double-double with 14.5 points and 10.4 rebounds per game, which leads Conference USA. Murphy is also a credible threat averaging 16.2 points, 8.1 rebounds, and 2.3 assists per game.

I see that the Golden Panthers recently defeated Florida Gulf Coast. Moving on...

Where do you see FIU finishing in the CUSA? Related, how bad is the CUSA going to be next season?

Who is in Conference USA this year? It probably changed since last week... Resident CUSA expert Jake Fischer put FIU at 9th in his preseason preview. I'd be a little surprised to see them finish this high, but basically this conference is a two team race between Louisiana Tech and Southern Miss. I guess it doesn't matter either since the Golden Panthers aren't postseason eligible.

I hope you had a very Merry Christmas or whatever holiday you may have celebrated. Talk to me about some casual gifts you may have received.

My wife and I are expecting our first child in about a month, so most of my gifts were for the baby, Palmer. One uncle got him Cowboys gear and now some clothing shelter has a little more stock in the infant department. It was just a solid Christmas all-around.

I haven't seen the movie yet, but apparently there's a scene in THE WOLF OF WALL STREET that involves snorting cocaine out of a woman's butt. Thoughts?

The same thing happens in Catching Fire, it's pretty wild.

Famous FIU alums include and Colts WR T.Y. Hilton and actor Andy Garcia. I view Hilton as a borderline WR2 next season for fantasy purposes and view Garcia as more of a C-list actor at this point who could use a hit or star turn. You agree?

I'm with you on Hilton, but I'd bump Garcia at least up to B because of the Oceans movies, the Godfather III, and Beverly Hills Chihuahua. I feel like C is a little rough.

Enough about you, let's talk about me: what are your observations of this Georgetown team so far and where do you see us come March?

I've been high on Georgetown all year. I think having a fat center, dirty white post player, and solid guard play is a real recipe for success. I think this can be a Sweet 16 team. I really like Starks and Smith-Rivera. I'm really interested to see the dynamics of the new/old Big East.

I think this will be a hard one to watch with both teams being pretty rusty, I'll go 73-57 Hoyas.