Share All sharing options for: The Casual Awards Christmas Spectacular!

Your Fighting Hoyas of Georgetown got crushed by the Kansas Jayhawks but that hasn't doused our Christmas spirit! As usual we here at THE GLOBAL PHENOMENON are putting on our Santa hats and handing out hardware to those most deserving.  Away we go!

The Chris Wright Heart of a Champion Award:
Bradley Hayes.  Yeah I could have given this to Markel Starks for leading the Hoyas in scoring and playing his heart out until the final buzzer, but when the hell else am I ever going to get a chance to give a prized TCWHOACA to Bradley Hayes?  Hayes scored his first bucket as a Hoyas against Kansas and for that he is a most deserving winner of the TCWHOACA. Congrats, Bradley!

Office Pool Loss Award:
Anyone else have "Kansas" has the game on our schedule that Bradley Hayes would score his first basket?

Big Man U Award:
Kansas.  Man, it must be nice to have a frontcourt like Kansas does.  Two lottery picks in Joel Embiid and Andrew Wiggins, a likely NBA guy in Perry Ellis plus a backup big like Tarik Black off the bench?  Kind of makes our Smith-Lubick-Hopkins-Moses frontline look like ass.

Coolest App You Don't Know About Award:
Venmo.  So it's like PayPal but way more casual. You can text charges and things to your buddies and it's linked to your checking account and stuff.  I just found out about this and I've already sent 'bills' to most of my friends.  If you are reading this and haven't received any texts from me, it is because you are not my friend.  You win.

Dickie V Award:
I like Jay BIlas and he brings a lot to the table compared to most of the other gimpburgers that ESPN has, but I found myself hoping that he'd just stop talking all the time.  Seems like Bilas is using these games as a soapbox to opine on everything from NCAA policy to the officiating and I kind of just wish he'd go back to doing what he does best and calling the game on the floor.

Highlight of the Decade Fail Award:
Aaron Bowen.  Oh how I wanted that two-handed dunk in Joel Embiid's face to go down.  Oh how Embiid turned that attempt into his own personal highlight and ruined everything.

You'll Shoot Your Eye Out Award:
Stephen Domingo.  At some point his shots have to start going in, right?  RIGHT? RIGHT?

Christmas Dinner Award:
Much like Thanksgiving, if you're having turkey on Christmas you might as well shoot yourself in the eye.  EAT HAM. HAM FOR THE WIN. HAM ALL DAY.

The Rocky Balboa Award:
Is the Jabril Trawick schtick wearing off? Love that "Philly toughness" and all but it's becoming a bit of a liability.  Case in point: After picking up two quick fouls in the first 5 minutes of the game (again), the Hoyas were struggling but down just 8 with 16 minutes to go and Jabril decided to elbow Andrew Wiggins who had been sleepwalking through the game to that point.  Wiggins drills a three, Hoyas never within double digits the rest of the way.  Ba humbug.

Fantasy Football Award:
Jamaal Charles! Wow! Merry Christmas to you and your family.  On the same token, on behalf of all the owners whose dreams were dashed because Aaron Rodgers couldn't get back on the field after 8 fucking weeks after hurting his collarbone and then watched Tony Romo toss 2 TDs against the Redskins with a herniated disc, eat a dick Aaron Rodgers. #NeverForget.

Toying with Emotions Award:
Georgetown Hoyas.  For the first ten minutes of this game I was watching and thinking, 'hey, maybe these guys are pretty good!'  Tweets about how good the Hoyas were playing started to flood my timeline and I had visions of AP Top 25 votes appearing on Monday.  Then the rest of the game happened.  I'm still not sure if the Hoyas of the first ten minutes is a team we will get to see for 40 minutes in any game this season, but if that happens I think Georgetown can be pretty good.

Hoyatalk or @CasualHoya comments? What will provide me with the best dark humor? Time to find out.

Wilt Chamberlain Award:
Tarik Black.  Tarik Black had 17 points, 6 rebounds and 2 blocks off the bench against Georgetown.  I started to write more about this performance but it made me very angry and now I'm pissed.  Here comes the documentation....

Document Your Kansas Experience Award:
There were a number of folks to sent in documentation from the trip to Allen Fieldhouse for the game, and in particular I'd like to give a big casual shout out to @OffAirOnPoint and @dcfooter for sending in the majority of the below: 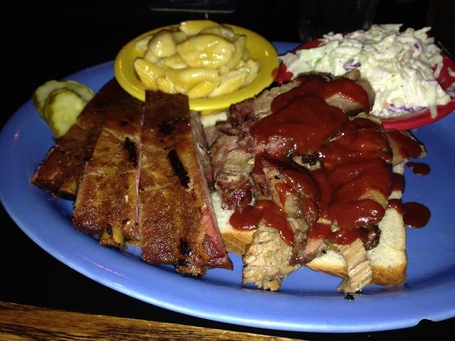 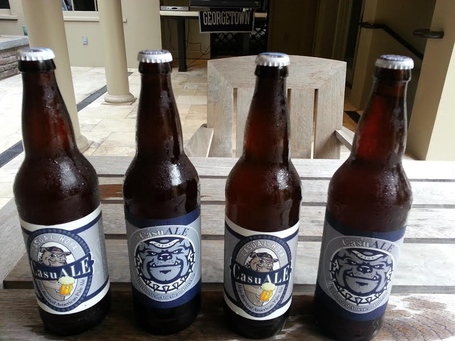 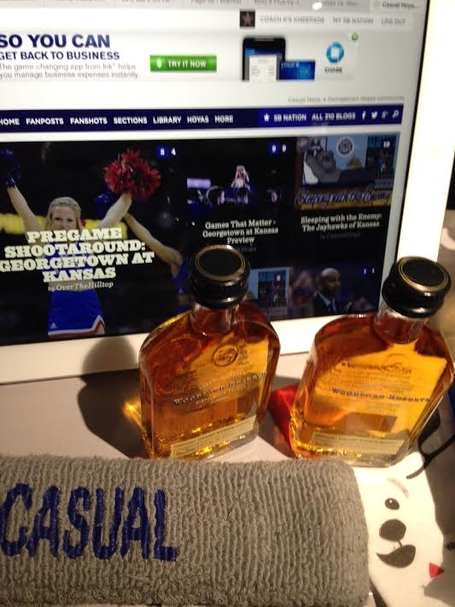 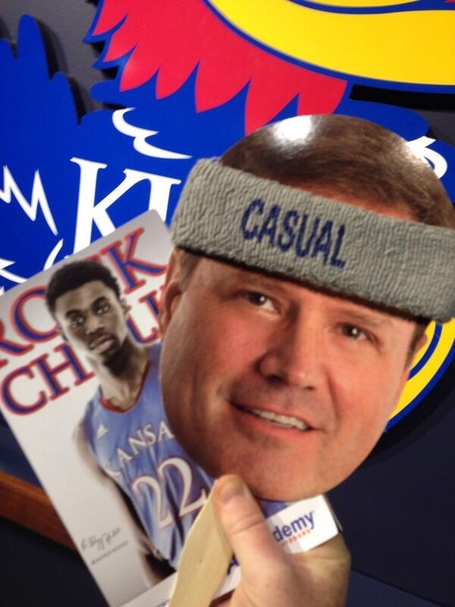 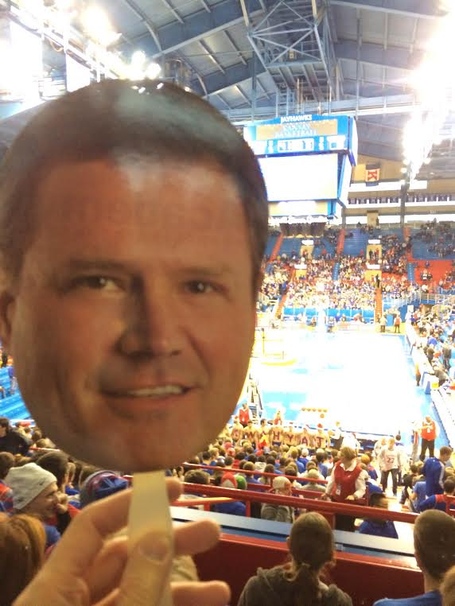 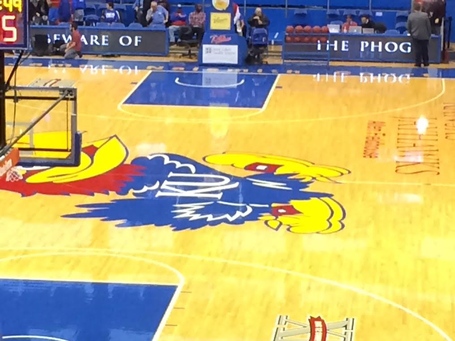 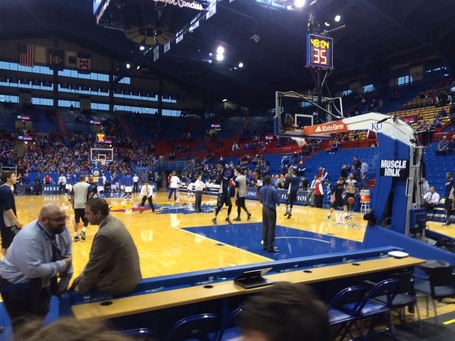 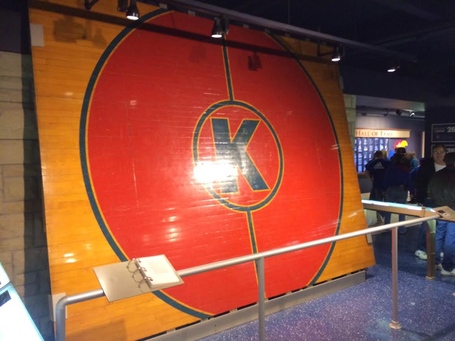 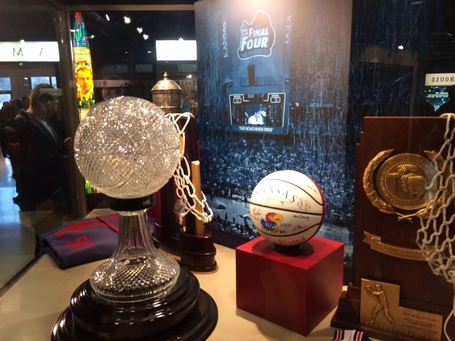 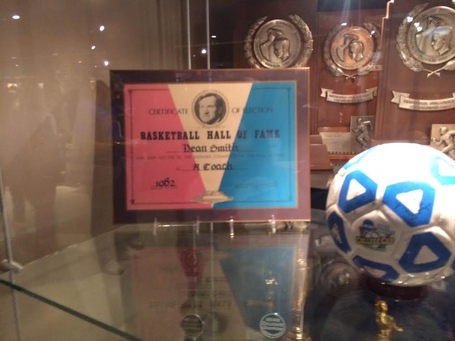 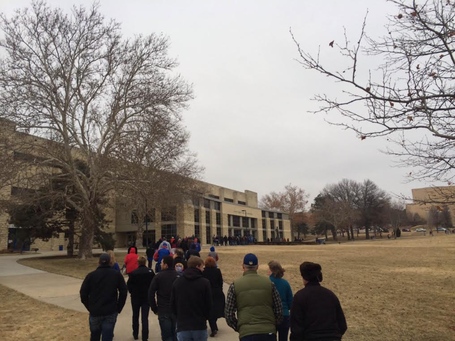 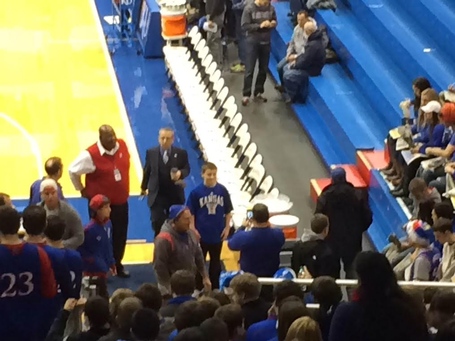 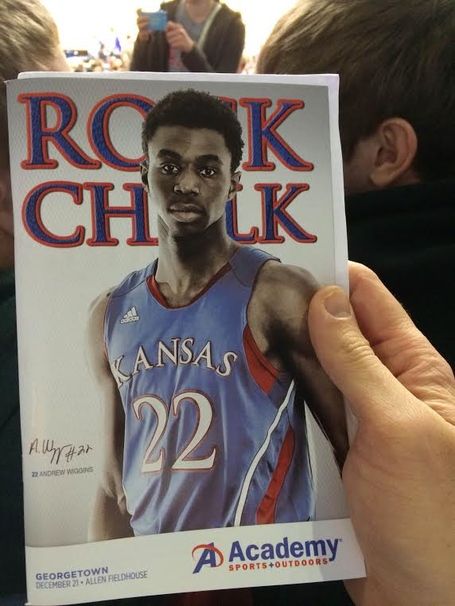 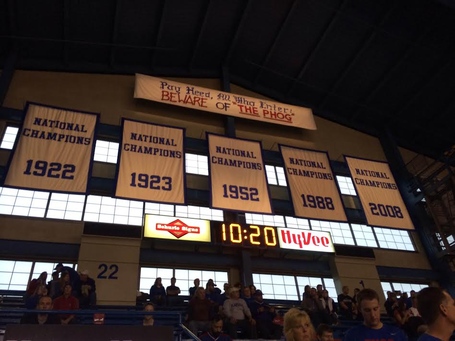 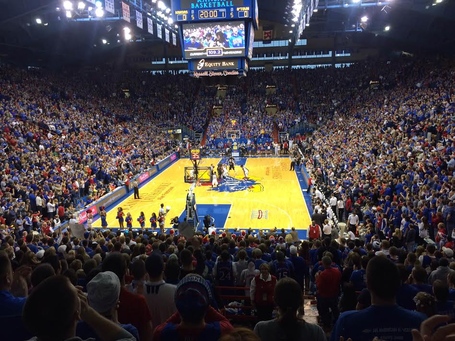 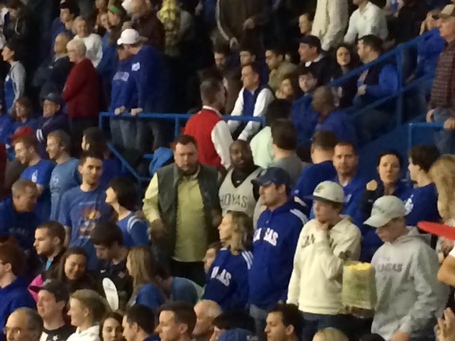 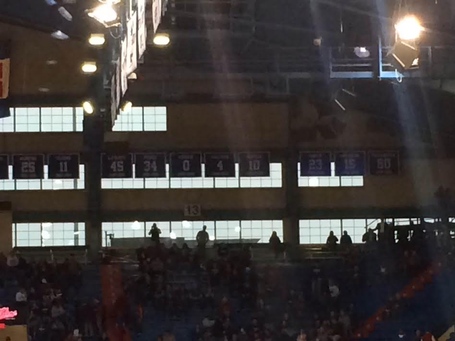 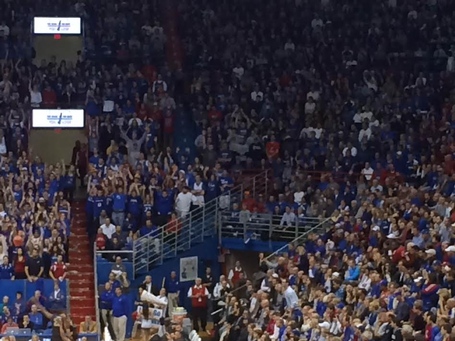 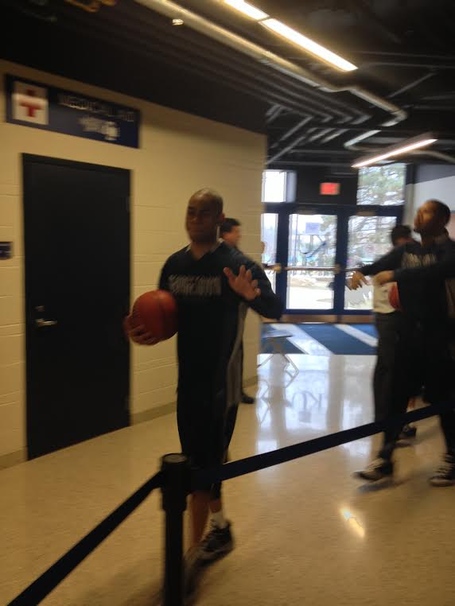 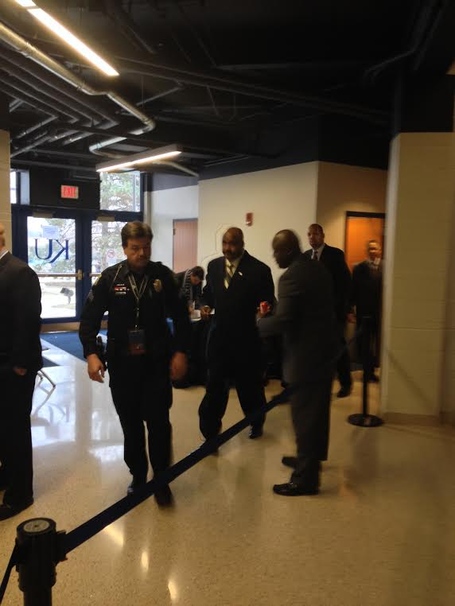 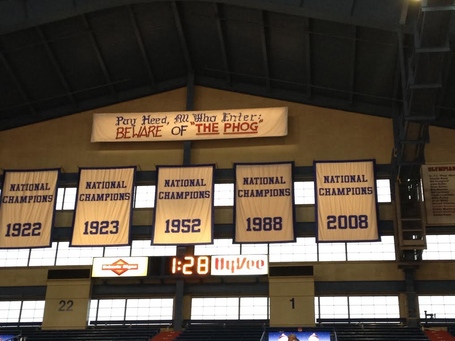 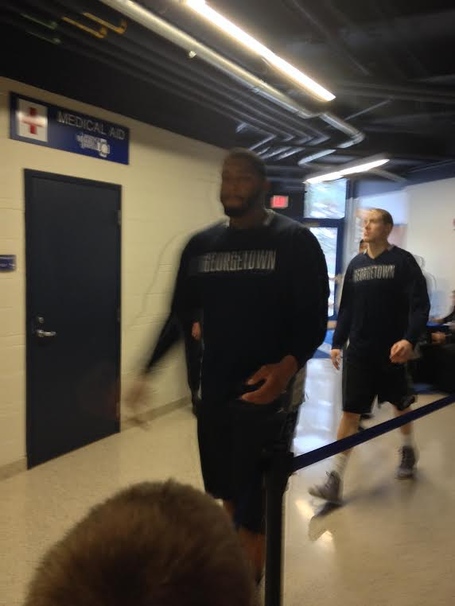 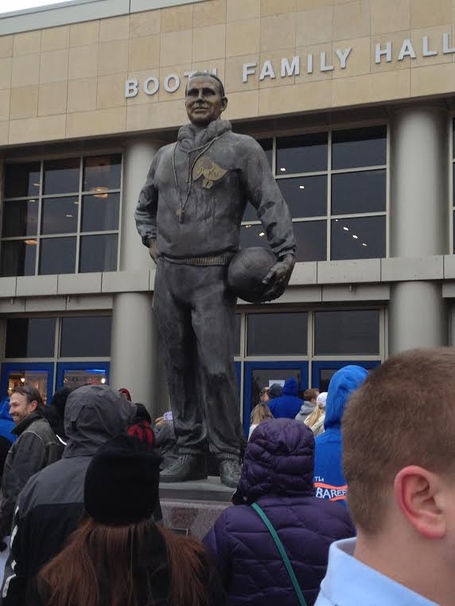 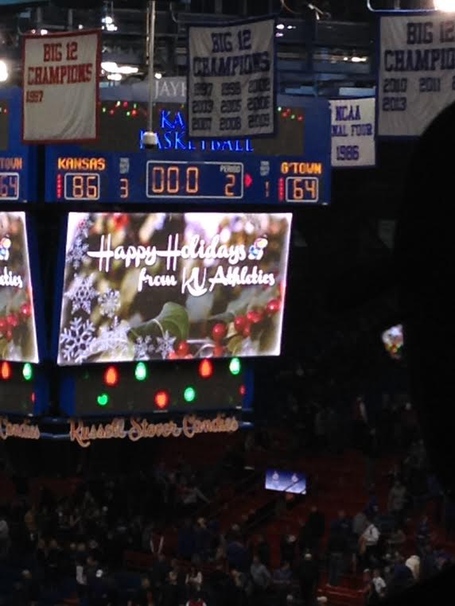 This is going to be real bad.

I feel sorry for my parents

when I watch Georgetown play while I’m home. I’m pretty sure they’ve heard some really filthy stuff come out of my mouth because of games over xmas breaks.

All upside today boys and girls

Are they really in the double bonus? Already?

THAT'S NOT A FLAGRANT FOUL, FUCKS.

i hate that rule.

You get to invent the rules once. Not during the middle of a damn game.

well that was fun while it lasted

Has changed this game

Why are our road uniforms black?

shouldn’t they be blue? or gray?

What the fuck are we doing?

It's a bit early for the chant, eh?

I hear Kansas has commitments next year

from Al Fani and Charter Club.

That I was so resigned to a loss from the beginning(before) the game. Small glimmer of hope aside?

What’s the last game that, heading into it, you thought we had no shot of winning?

This team is not fun to watch

We’re playing a team that is probably seriously underranked given a couple bad losses. They have way more raw talent than we do. We’re playing at an arena that has a huge home court advantage. We’re going to be just fine — not amazing — but just fine in Big East play. We’re perfectly aligned to make the tournament. This is not a basis to sell the farm here.

But the zero rebound issue kills me. It’s nuts.

He can’t clear out a little room for himself in the paint?

I’m not talking about Rodman-type anticipation or Barkley-type mixing it up.

Just clearing some space and getting those massive arms up.

No excuse for zero rebounds.

this will make playing

and beating kansas in the ncaa tournament really quite satisfying…

but i didn’t see coaching as a problem here. Bilas even talked about how JT3’s mixing up of defenses was keeping Georgetown in the game in the first half.

I could be convinced otherwise, but the problems I saw today were mainly: talent disparity and inability to defend without fouling. Offensive woes were, I think, a result of bad lineups we had to put out there because of foul trouble.

by aja32 on Dec 21, 2013 | 2:26 PM up reply rec (8) flag actions
The Kate Upton Award for Kate Upton Doing Kate Upton Things:
Kate Upton.
Chicken Little Award:Hoyas fans.  SETTLE DOWN, PEOPLE! Sure this team hasn't looked great so far but by jeepers we're just 10 games into the season!  The Hoyas will likely enter the Big East schedule at 8-3, and any team with three guys like Josh Smith, Starks and D'Vauntes Smith-Rivera is a threat to win anytime it takes the floor.   Georgetown is well equipped to win a bunch of games in the new crap Big East so let's see what happens before we start calling for the program to shut down.
End of Days Award:Anyone else terrified about the DePaul game?
The Georgetown Hoyas are not quite yet a nationally ranked powerhouse.
Florida International is NeXt.
Merry Christmas to all, and to all a good night.