Sleeping with the Enemy: The Jayhawks of Kansas

Share All sharing options for: Sleeping with the Enemy: The Jayhawks of Kansas

Georgetown and Kansas! Two storied programs battling in December! Doesn't get much better than this, right? Here with us to chat about Georgetown's next opponent (and last remaining marquee one on our crapfest schedule) are our good buddies over at Rock Chalk Talk, the SB Nation site devoted to all things Jayhawk.  Let's do this!

Talk to us about Andrew Wiggins. Did The Hype Machine go a tad overboard on this kid or you still think he's the next greatest thing ever? 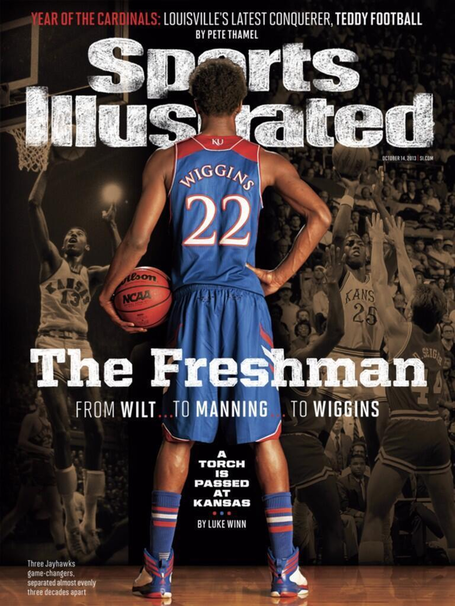 Personally I think he's played well and continues to get better. Unfortunately the hype machine is a bit fickle and being at the top of the heap means people will pile on. I'm not sure he's the next greatest thing ever, but he's a very good one and done freshman basketball player with a world of potential. He'll need to develop a little more consistency in his shooting, but in transition and in a one on one situation, he does do things that are pretty remarkable to watch.

Aside from Wiggins, Joel Embiid has made a big name for himself this season and also appears poised for the lottery. Tell us a little bit about Embiid and where you see his ceiling.

Embiid might have the highest ceiling in the class. He moves extremely well for a seven footer. He seems comfortable going to his right or his left in the post, and he shows flashes of talent that just make your jaw drop at times. Sadly I don't think we'll ever see him at his best at Kansas, but that's the nature of the beast with the one and done. He's going to be up and down during this one year, then as a fan of Kansas I hope he lands in the right situation because he could be a tremendous talent in the NBA. Honestly, for his position, I like Embiid better than Wiggins from a potential standpoint. But I'm splitting hairs there.

Other than Wiggins and Embiid, who are some of the other guys Georgetown needs to be aware of on Saturday?

I'd say Perry Ellis is probably the next most important player for Kansas. He was very effective early in the season when Kansas looked like one of the top teams in the country, and then he struggled during our five game fall back to earth. My sleeper is Brennan Greene, he has great shooting range and is really becoming a valuable asset as Kansas sees more and more zone.

The Rock Chalk Jayhawk chant is one of the best things in all of college hoops. What's the backstory of it and does it ever not give you the chills?

Long story short it started back in the late 1800's when a professor was trying to come up with a cheer. Geology professor came up with it, lots of limestone on campus, original chant was rah rah Jayhawk, modified to rock chalk as an ode to all the chalk rock (limestone) on campus. Origins of it are actually a little bit goofy if you ask me, but what it turned into is far from it. It's truly awesome to be in person at a significant game and hear the cheer roll through Allen Fieldhouse. It's pretty much quiet, calm, you hear the sneakers squeaking on the hardwood as the game comes to a close and the chance just echoing throughout. Now I wouldn't say it gives me chills everytime, certainly not when I'm just watching on TV, but if you're sitting at a game, in person with a bunch of Kansas fans and the Jayhawks are putting the finishing touches on a big win, it's almost impossible not to get a chill and a huge sense of pride when hearing the chant.

The Jayhawks have struggled a bit out of the gate this season, including dropping a game to our new forced-rival Villanova in the Bahamas. What do you attribute these problems to?

Youth. The rotation during our last game included 5 freshman, 2 sophomores and a junior. The team hasn't found it's identity yet and players aren't entirely comfortable with their roles. It's coming though, slowly but surely they'll put more and more of the pieces together. I wouldn't point to one area because I think as a whole this team needs to get better. Attack more offensively, focus more defensively and effort throughout.

How would you rate the Bill Self era? Getting a national championship is always amazing, but is there a feeling in Lawrence that he should have two or three more? If you were starting a program tomorrow, would you want anyone other than Bill Self at the helm?

9 straight Big 12 titles. One national title. Constantly in the mix. Nope, absolutely wouldn't trade him for anyone. I think we'd all love to have one more, but the NCAA tournament is a fickle thing and I think we realize that as much as anyone can. You'll have a year where you end up disappointed, then you'll have a year where you unexpectedly get to the final game and feel great. It's just the deal. Wouldn't trade him for anyone though, hope he's around for another 15.

Where do you see the Jayhawks finishing this season in the Big 12? Is anything less than an Elite Eight or better finish going to be considered a failure?

Top 3 in the Big 12. It think there is a pretty serious threat to the conference streak, but I don't doubt that Self will make a run at it and in all honesty I have a gut feeling he pulls it off somehow. This nonconference stretch is brutal and hopefully it pays dividends later. As for the tournament, I sort of have the opinion that I'd like to see this team get to the second weekend and at that point I think there are a lot of quality teams and I wouldn't use the word failure if they lose.

Sure, why not. Paul Rudd is in it, he went to KU...wears Jayhawk apparel. I'll support that.

Which is Kansas' greater contribution to the legacy of college basketball: employing James Naismith as its first coach, or giving Wilt Chamberlain a Cadillac to come to Lawrence?

I'd say Naismith. I think more people know that Naismith coached at Kansas than they do Chamberlain playing at Kansas. He's probably more often remembered for his professional career than anything. I would say if he had won a title or stuck around another year or perhaps if blocks were a recorded stat, then yes he would probably have a larger than life legacy at Kansas.

Speaking of Naismith, admit it, that guy in the "30 for 30" documentary who arranged to have some wealthy Kansas booster buy the original rules of basketball was insufferable.

A little off, but I suppose that's what it takes to independently knock on the doors of multimillion dollar donors to get those things back in Lawrence and then get the story on ESPN. Glad he did it, weird or not.

I view Georgetown as a very solid program that probably had it's hey day back in the 80's, but continues to string together solid seasons and push quality players to the forefront of college basketball and into the NBA. I do think realignment is going to hurt Georgetown some, potentially significantly. The power of the Big East was a big part of why Georgetown was able to gain respect. Good players, successful seasons, tough league, that earns you some clout. Hopefully it doesn't hurt the perception too much over the longterm. Short answer though, a lot of respect for Georgetown. When the series announcement was made, Kansas fans were excited to set up a matchup with a program they viewed as one that would be perceived as a quality opponent regardless.

If I have one night in Lawrence, Kansas, where am I eating and where am I going to party? Related, do you happen to know any of the @KUBoobs chicks? Asking for a friend.

Hit up Mass Street. Free State Brewery is a popular one. Jefferson's as well. I'd recommend a burger from the Casbah, seriously incredible. They weren't around when I was in school, but exceptional burgers. Red Lyon is solid and of course I'll give the obligatory Louise's West plug because it's my favorite dive but a little off the beaten path. Nope, KUboobs was something that happened long after my time. Might be some guys on the site that do though.

If you don't know any of the @KUBoobs chicks do you know anyone who might? Asking for another friend.

Ha! Can't say I do for sure. Put up a fanpost and maybe someone will respond in the positive.

(Casual Note: If someone wants to do this that would be amazeballs.  You know, for my friend.)

I'll go with Kansas by 8. Being at home should feel good for this team. That hasn't happened much so far and I think they'll be more comfortable.