The Casual Awards: Dousing the Phoenix

Share All sharing options for: The Casual Awards: Dousing the Phoenix

The Casual Awards are back!  Your Fighting Hoyas of Georgetown defeated the Phoenix of Elon in not relaxing fashion last night and we're handing out hardware to those most deserving.  Away we go!

The Chris Wright Heart of a Champion Award:
Markel Starks.  Starks started 1-8 from the floor but turned it on the 2nd half to finish with 21 points including 4-5 from three in a game-high 38 minutes.  Starks also produced the loudest roar from the crowd as he got the crowd to actually make a sound (wow!) during two free throw attempts by the Phoenix late in the game.  The Elon dude missed both, causing the 7,000+ crowd at Verizon to go nuts over a free Chick-fil-A sandwich they will never actually get.

Tweet of the Night Award:
Regarding said Chick-fil-A promotion:

Elon ranks 322nd in all of D1 in terms of rebounds per game. Currently, they're outrebounding the #Hoyas 29-26. #Oof

Bombs Away Award:
The Elon Phoenix.  Good God have mercy on us!  The Phoenix was relentless hoisting shots from behind the arc, and in the 1st half pretty much everything was going in.  There was one attempt that hit the rim, the backboard, then the rim again before dropping ever so softly into the net for yet another back-breaking three that was particularly heartbreaking, causing me to momentarily lose my vision and question my existence.

Defense Wins Championships Award:
On the strength of the first-half shooting performance Elon headed into the locker room leading by one after dropping 40 points on Georgetown's heads.  Related, something called 'Metro State' in Division II beat Elon earlier this month.

Offense Wins Championships Awards:
The Hoyas have scored 80+ points in five games already.  I'm not a gambling man (I am lazy, however) but I think that the Hoyas probably hit that mark less than half a dozen times all of last season.

Dickie V Award:
On a night when most of the college hoops world was tuned in to ESPN for the Jimmy V Classic, Georgetown made its first ever appearance on something called CBS Sports Net and had former coach Pete Gillen and some guy named Dave Ryan calling the game.  While Gillen sounded like he hadn't slept in ages and was yelling at me like a drunk, Ryan was doing his best Gus Johnson impression, cheering like a little schoolboy after every Elon three and hyping the potential upset at every chance.  When Georgetown built a short-lived double-digit lead late, Ryan lamented that Elon's chances at an upset were slipping away, and as the Phoenix made a late run to make us all nervous in the waning moments, Ryan could barely contain his enthusiasm.  Didn't surprise me to learn after a brief wikipedia research that Ryan is a graduate of Syracuse University.

The Eye Test Award:
The Hoyas are now 7-2 and have won 6 in a row.  Other than the slip-up against Northeastern that ruined the season and the loss in the opener against Oregon in that ridiculous exhibition game where Georgetown was 1-15 from three on what looked like a badminton court, the Hoyas beat high majors Kansas State and VCU and have played pretty well against these various mid to low major teams that many expect to be factors in their Conferences come March. HAVING SAID THAT, there's something about this Hoyas varietal that isn't sitting well with me.  If Starks and DSR are off, Georgetown has no chance.  Josh Smith is a load underneath, but doesn't get the ball enough in a position to score and is slower than molasses on defense.  Hopkins has talent but a low hoops IQ. Lubick has high hoops IQ but not much talent aside from those majestic hook shots. Trawick we all love but he doesn't really bring that much to the table other than bravado.  Bowen touching the ball is a bad thing.  Ayegba is a role player at best.  Cameron doesn't play enough to make an impact.  Am I missing something?  I just don't find this team that fun to watch, not compared to the past couple of years, anyway.  Yet despite all of that we're 7-2 with a big chance to start gaining momentum at Kansas on Saturday and probably the 3rd or 4th best team in the Big East.  Speaking of which...

The Big East Kinda Stinks Award:
The Big East.  Yes I know that Conference play hasn't even started, but this hasn't exactly been a banner non-conference performance from the new big bad Big East.  Villanova's performance in the Bahamas aside, Marquette has 4 losses, Creighton hasn't been impressive, Georgetown is winning ugly, Butler I suppose has been a bright spot but doesn't excite anyone, the Johnnies are the same Johnnies, Providence nearly lost to friggin' Yale last night, DePaul is DePaul and Seton Hall has been downright embarrassing.  You're welcome, Fox Sports! 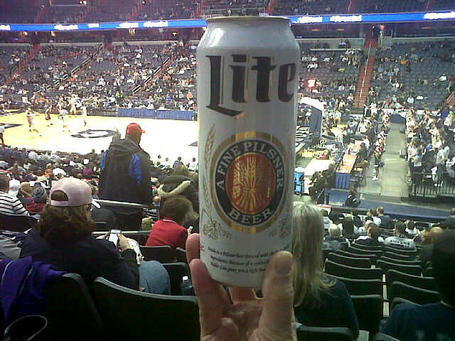 Movie I'm Looking Forward To Award:
The Wolf of Wall Street.  That Matthew McConaughey sure is pretty.  So is this chick.

You ready? Greatest and most improbable win in fantasy history.

I put up a good 150.06 points, feeling great. Just a consistent performance from top to bottom.

Long story short, I am up 20 points going into Monday night. He has Stafford and Torrey left. My probability of winning is 18% according to Yahoo given Charles threw up 55.5 points in a Michael Jordan at the Garden type performance.

Monday night comes, and I am not feeling good. Game starts, Megatron drops a few easy throws. First quarter ends with Stafford having 2.2 points and Torrey having 3.8 points (0.5 for each catch). I am hanging by a thread, but still fighting. Come to halftime, I am up 10 points, still somehow in it.

Ravens get the ball, drive down to the Lions 43 with 2 incompletions to Torrey. He doesn't touch the ball. Tucker hits a 61 yard field goal and leaves the Lions the ball with 3 time outs and 38 seconds left.

For me to win, Stafford needs to throw a pick on his first throw and not complete another pass. What does he do? EXACTLY THAT.

I have to believe the combination of those 3 events with less than 2 min left has to be a probability of less than 3% of me winning:

1. Ravens drive down field without Torrey touching the ball

3. Stafford throwing a pick on his first throw

Any of those three things don't happen and I'm fighting for my entry fee in the 3rd place game.

Not sure if this is doing it justice, but it was as riveting a match that has ever happened. You'll see more when the 30 for 30 comes out.

Document Your Lunch Award:
Steak fajitas at Norma's in the Parker Hotel in Palm Springs, California. 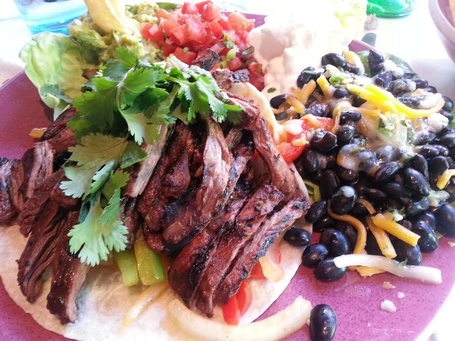 Epic Rant Award:
This is awesome.  Not sure how we would react if JT3 did this.

Bravo Award:
This week in Vanderpump Rules we saw Jax hit the dating scene, seducing a 20-something wannabe actress with his model looks and winning personality even though he has the name of another girls tattoo'd on his arm.  Meanwhile, former flame foxy Stassi wasn't happy with the developments and tried to make herself feel better by yelling at him at work.  She and her friend Katie then went to get waxes on their female parts while on the other side of town, Tom tried to breathe life into his dysfunctional relationship with live-in girlfriend Kristin by taking her to dinner at a Korean BBQ joint even though she is a vegetarian.  Tremendous show.

good luck to all in t-shirt toss this evening

Makes me want to cry. Just not enough students will attend tonight so they only get half of one side and upper levels tonight. Fight for those seats damn it or they will take it away.

three hookers in the lane already by lubick

not all good looking.

My word, that is one pale human on the court for Elon

Put him up against Lubick and his vibrant swimsuit any day

The CBS music while losing to a crappy team?

it's hard to tell

That bad nightmare that looks exactly the same every fucking time

At least the FT Defense is good for the Hoyas

"Critics are men who watch a battle from a high place then come down and shoot the survivors."

We just don't have the horses

We won a lot of games last season because in almost every game, we had the best player on the floor but without him, we’re just seeing a team that’s honestly not as talented as we’d all like to think.

Help is on the way but I almost don’t want to watch games like these this season because I know a loss is far from out of the question.

Joshua Smith does great work around the net

But I think we have all the tools to be a very good team. It just feels as though things aren’t clicking quite yet

Problem for Elves and Hoyas this week.

I CAN'T HANDLE THIS

While enjoying your free chicken sandwich...

…feel free to consider that if Elon hadn’t Chick-Fil-A’d those two free throws, they’d have had the ball down 3 with under a minute to go and our defense standing next to a dumpster with a kerosene soaked rag and a lit match.

Serious proposition: if the Verizon Center staff randomly inserted pictures of the T-Shirt Gun and the Chick-Fil-A logo on the Jumbotron during gameplay, we’d instantly have the best home court advantage in the Big East.

Also, if they played a continuous loop of the shuffling basketballs game during our defensive possessions we might explode Ken Pomeroy’s defensive metrics.