Sleeping with the Enemy: The Raiders of Wright State

Share All sharing options for: Sleeping with the Enemy: The Raiders of Wright State

Your Fighting Hoyas of Georgetown look to shake off the rust of a season-opening loss to Oregon and get back to its winning ways against the Horizon League's vaunted Wright State Raiders.  Here to dish on all things Wright State is our good buddy Mike from RaiderRoundball.com, the internet's premier destination for all of your Wright State hoops needs. When you're done reading this opus, check out our answers to his hard-hitting questions right HERE.  Let's do this.

Wright State is widely viewed as a Tournament team this season. Who are some of the players on the Raiders that Georgetown needs to be worried about?

Cole Darling is a preseason Horizon League First team selection but was injured toward the end of the Findlay exhibition game last week - not sure of his status.  Cole has battled the injury bug his entire career at WSU.  Likely starters: Darling (?), Matt Vest, AJ Pacher, Reggie Arceneaux and JT Yoho return from last year's surprise squad.  Not unusual however for there to be a different "player of the game" every night.

Tell us a few things about Wright State (the school) that we might find interesting.

WSU is named for the inventors of the airplane, the Wright Brothers.  WSU was founded in 1967 and started Division II athletics around 1970.  WSU won the DII men's basketball national championship in 1983 and transitioned to D1 in 1986.  This success resulted in WSU building the 10,000 seat Nutter Center arena which opened in 1990.  WSU appeared in the NCAA D1 tournament in 1993 - losing to Indiana.  Next appearance was not until 1997 when the opponent and winner was Pittsburgh.

Over at Casual Hoya we take our hoops seriously but our drinking more seriously.  When you walk into a bar, what are your go-to beverages of choice?  Feel free to elaborate on various drinks for various occasions, etc.

Cheers then mate, I concur.  I'll speak only for myself here but I am a craft beer fanatic as my Facebook friends will confirm.  I'll drink about any style but tend towards porters and stouts.  A good west coast style IPA is always welcome on my coaster.  The WSU Alumni Association hosts a beer tasting every year after a men's game.

The Wright State logo contains what appears to be a wolf but the team name is the Raiders.  What's the deal?

Yeah, crazy huh?  The mascot has evolved over the year from an amateurish pirate character in the really early days to what was described as Peter Pan on crack to a puppy dog character and finally (?) this wolf thing.  The wolf, according to WSU Athletics is a ‘raider' within the wild.  Hey, kids love him and he is quite entertaining. 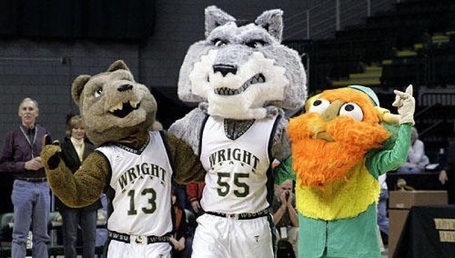 Based on this video, the Raiders seem to have an impressive shot-making arsenal, though perhaps a rudimentary understanding of the significance of the sidelines. Can we expect to see this sort of trickery against Georgetown?

Possibly, it depends on how hard-nosed the ushers and other security are in the Verizon Center and of course the vision of the men in stripes.    Hasn't every basketball coach and fan complained about the vision of the refs?   ‘sides, what's a inch here or a yard there?  Ask Tony Romo.

Wright State played at a sloth-like pace last year, averaging 63 possessions per game, good for 291st in the country, just ahead of Georgetown, which was 301st nationally. What do you do to pass the time during games?

Georgetown played a non-conference game against another defense-first, slow-paced team last year. Rumor has it that the opponent was Tennessee, and that 73 points were scored total between the two teams. All evidence has been destroyed of this game. Am I going to need more shock treatment after this game between us?

More than likely you'll be testing the robustness of your new Obamacare insurance plan for mental health coverage.  Coach Donlon has always emphasized defense (obviously) and his teams are usually quite effective defensively.  Of concern to many is fact that even with 11 returning players that purportedly know the ‘system' they gave up 80 points in the Findlay exhibition.

Wright State forced turnovers on nearly 1 out of every 4 possessions last year. Why are you guys so greedy?

Raiders coach Billy Donlon was the Horizon's Coach of the Year last season.  Do you anticipate him being on the sidelines for the Raiders for awhile or would a Conference title send him to a high major gig?

Money talks.  Seriously, I get the sense the Billy truly does love this university and the administration he reports to all the way up to President Hopkins.  He is a driven coach's son that understands the nature of the coaching game (wins=job, losses=no job).  I do expect him to be on the WSU sidelines for the next several years.