Share All sharing options for: Highlights from the Hoya Hoop Club Open Practice

The Hoya Hoop Club hosted its open practice today, which is the annual chance for those who have opened their wallets to support the Georgetown basketball program to meet the players, ask questions to JT3, watch a practice and bathe themselves in the delusion that envelops each Hoyas fan before the start of every season. Special thanks to a casual spy at the event for the below: 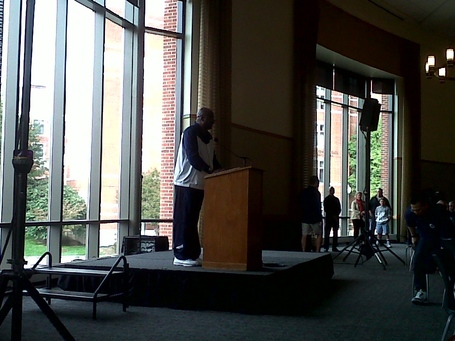 Doesn't know when Greg Whittington will play - won't play until he's 100pct physically and mentally.
"And we know Greg the latter will take longer than the former" haha

Schedule is hardest ever. Probably "too difficult"
Wright State is a tournament team, Elon too.
Wanted tough opponents to help get us ready. Big East "is still the Big East"

Practices started a couple weeks ago. Process is slower now, a lot more teaching with this group. "Veteran group" just lost one person "but that kid #22 was pretty good."
Coach Pete Carril from Princeton has been here all week. "It's good to have his eye here"

Why can't NCAA decide on Josh Smith?
Gtown has filed appeal. Waiting. "Every week we hear we're going to hear next week" Doesn't know when he'll get answer
"A lot of things" need to be looked at regarding NCAA

System is "incredibly flawed" with NBA Draft process. Compares it to baseball. Basketball not allowed to talk to pros so kids make bad decisions. "Based on what the guy in the barbershop is telling them"
Should have interaction with pros so you don't make mistake. Should be able to come back to school if enter draft was "mistake"

Rule change on hand checking?
"Its going to be really interesting to see how long that lasts." If they stay with it we'll have to adjust.  Officiating points of emphasis usually only last a few games. "We'll see"

Toughest opponents in new conf?
Not a big gap between #1 and #8. St John's might have most talent. Its going to be a dog fight every night"

Players changed from last year?
Group worked "really hard" off season. DSR droppd 10-15-20 lbs "he's a lot quicker" sprained his ankle now being "a little bit of a baby".  Lubick was on wall street all summer had bets he'd come back overweight. He came back in great shape.

Who is hardest person you've had to coach?
"You mean the biggest pain in the behind?"
Yes
"Normally those players decide they want to go somewhere else"

Question about Bradley Hayes?
Making adjustment to college. No free time any more with practice class study hall. That's a big adustment. He's still got a ways to go.

How is Josh Smith doing?
"Much more skilled than I thought"
"He's huge. He's a load down there"

Compare defense this year to last?
"Not yet." Group understands how to do it. Going to be a good defensive team "the world loves to talk about our offense too much"

The offense? The pace?
Teams don't get quick shots against us.

Do you enjoy these young men?
Some days more than others. Every year its a new group.

Seniors?
5 this year. This is the first time we've had an old team. Senior leadership not always the case. Got a group that understands its hard to win.

Analytics at college level like pros?
Maybe. Somebody gave me their phone number in the autograph line about that so I'm going to call them next week. Trying to learn about that world to see if there's any validity to it.

Syracuse?
Coach asks crowd: Should we keep playing Cuse?
Most people raise their hands. "That series will continue. How and when I don't know"

Georgetown's brand is strong lots of invitations like Korea. Fox wants Georgetown to play Superbowl weekend. Michigan State in middle of Big East is "brutal, may not be wise". Kansas coming here next year.  Working on Big East - Pac 12 or Big East - B1G Challenge. Hard to fit "another monster game in there" 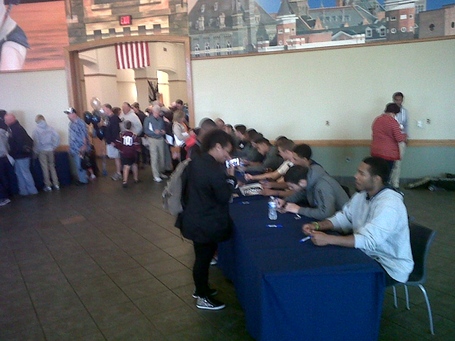 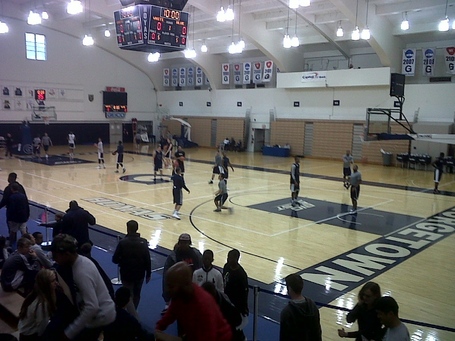 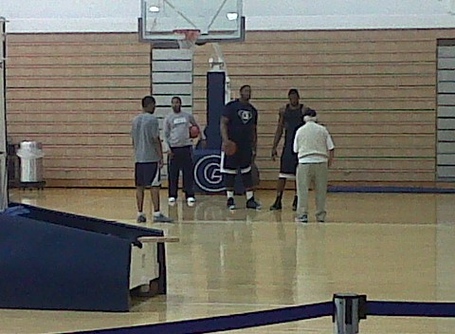