Sleeping with the Enemy: The Panthers of Pittsburgh

Under the covers with the Panthers.

Share All sharing options for: Sleeping with the Enemy: The Panthers of Pittsburgh

The Georgetown Hoyas look to get in the winning column in Big East play tonight and as usual we here at THE AWARD-WINNING GLOBAL PHENOMENON are bringing you everything you need to know about Georgetown's next opponent. Here to dish on all things Panthers is our bro at Cardiac Hill, your source for all things Panther on the internet. Cardiac Hill, this Iron City brew is for you. Let's get right to it!

Pitt rolls into Verizon at 12-3 with losses against 3rd ranked Michigan, 14th ranked Cincinnati and Rutgers. Coincidentally however, those are the only decent teams Pitt has faced all season. Is this Pitt team that good?

I doubt it as the Rutgers game on Saturday proved. Rutgers could be a decent team this year in the Big East, but I don't think anyone would project them as a tournament team yet. Pitt's loss there, even though it was just a five-point one in a tough place to play, showed they're not exactly ready for prime time just yet. I do think the team is better than last year and also think they could reach the NCAAs, but with a couple of freshman playing pretty prominent roles, the team has to get better as the year goes on for that to happen.

Talib Zanna has really emerged as an effective post player for the Panthers. is this his ceiling or can he get even better?

He can get a little better, but I think he's probably pretty close to his ceiling. I don't see him as a 16-18 point scorer and while he's gotten remarkably better, I'm not sure we'll see him take another big step ahead next year. It's also worth pointing out that as Steven Adams develops a bit offensively (we hope, anyway), Zanna could have fewer opportunities assuming Adams comes back next year.

Last year you famously chose 'Morton's' as your favorite restaurant and a 'shiraz' as your ideal drink to wash it down with. This selection of a chain restaurant was met with great disdain by the Casual faithful. Has your stance changed at all? (Please note that this is likely the most important question of this entire piece) 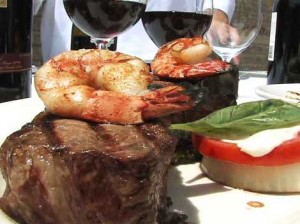 Hey everyone, let's go to Morton's! via goodtaste.tv

Not a chance. That will disappoint locals who would prefer I select a place that smashes cole slaw and french fries onto a hamburger, but if I'm true to myself, I'll take a medium-cooked strip or filet minion from a great steakhouse over that crap any day. And while Morton's is a chain, having tried several steaks in Pittsburgh, it's still the best I've had. And that whole shiraz/red wine thing - yeah I'll stick with that.

Do you see Jamie Dixon coaching next season for Pitt in the ACC or will he be a coach in the PAC-12 for either UCLA or USC? Hypothetically if he does leave, who would you like to see as the next Pitt coach?

Pitt's gone through this seemingly every year and we won't realistically know until we see what jobs could be open. But he really seems to enjoy the area and it's conceivable he stays on over other job offers. USC was actually an option a few years back, but he stuck around through that. He always spoke fondly of the Big East, but if Pitt has some success in the ACC, I think he'll enjoy the challenge of playing against teams like North Carolina and Duke. If Dixon ever did leave, the guy 95% of fans want is Sean Miller at Arizona. Miller was one of Pitt's best point guards of all time and the Pittsburgh native would be a pretty good replacement if it ever came to that.

How do you think Pitt's move to the ACC will impact recruiting? Help? Hurt?

When it comes to five-star kids that have a big desire to play in the ACC, it's hard to see Pitt competing against the likes of North Carolina or Duke. But even though they're leaving the Big East, I think the pipeline they've developed in the NY/NJ area will continue to pay off. Pitt picked up a North Carolina guard for 2013-14, Josh Newkirk, and fans are hoping that it could be the beginning of things to come. But in reality, Newkirk wasn't heavily pursued by the top ACC schools and is 'only' rated as a three-star recruit. Pitt will be able to get those types of kids, but until they're able to win in the postseason, they won't easily get the top recruits pursued by the top programs in the conference.

Are you all aboard the Steven Adams hype train? Is the kid that good and do you think he sticks around for another year?

I've never been on the Steven Adams hype train as far as believing he was going to come in and score 15 points a game as a freshman. The indications were that he was a good rebounder and defender coming in and that much has held true. He leads the team in rebounds and blocks. He's even fourth in steals and in addition to all of that, alters a good number of shots. But where he has to improve is establishing position in the paint and developing some post moves. He looks very tentative on offense much of the time and even when he got the ball down low earlier this season, he's not done a whole lot with it.

That said Adams' potential is still high enough that I'm certain he'd be drafted if he left. I can't say how many nonsensical emails and tweets I've had to fend off from people that don't watch the NBA and try to point out that he's not been able to dominate in college as a reason he wouldn't be selected. The draft is largely based on potential - that much has been proven by the number of international players selected that may not even ever suit up for their NBA team. Adams could leave early if he wanted, but the talk of him being a lottery pick that was there before the season has died down dramatically. He's also said he wants to stay four years, but few people really believe that will happen. Right now I expect him to come back, but that could change if he shows some improvement in the Big East season.

It seems as if Tray Woodall has been at Pitt for a decade. No real question here.

Yeah, to fans who want him gone, that's probably the case to them, too. Part of it is that I think all of Pitt's point guards kind of run together...Brandin Knight, Carl Krauser, Levance Fields, Tray Woodall ...

I saw something recently, might have been on The Today Show with that minx Savannah Guthrie, about Pittsburgh becoming the new Portland, a burgeoning hipster community with Silicon Valley rejects and a thriving restaurant/bar scene. True dat?

Um, I guess? In all seriousness, Pittsburgh is made up of lots of different neighborhoods with their own type of flair. Downtown Pittsburgh, surprisingly, is pretty dead at night - largely (in my opinion) because all of those neighborhoods have their own establishments. A place like the south side, though, with literally hundreds of bars could have their fair amount of hipsters since it's a neighborhood with a lot of younger people and recent grads.

Went to see The Hobbit last weekend and it was literally the first movie my wife and I went to see in a theater for a couple of years. Whether it was good or not, I'm still trying to decide. 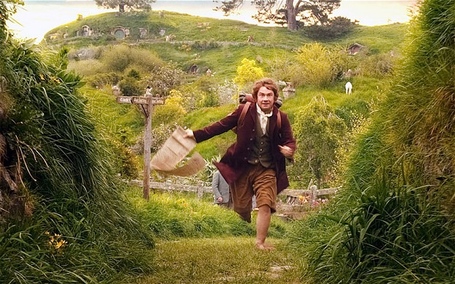 I am a Hobbit. via i.telegraph.co.uk

In hindsight, are you pleased with Pitt leaving the Big East? Is the fanbase excited? Will you watch our game against Dayton in two years?

With everything taken into account, I think Pitt made the right move to leave for the ACC. The Big East was bound to split at some point and if Pitt and Syracuse didn't bolt for the ACC, schools like UConn and Louisville surely would have in their place. When you factor in that Pitt will now be playing in the nation's best basketball conference, a decent football conference, and get a significant larger amount of money, it's hard to not be happy about that.

I watch very few conference games of other teams as it is right now, so while I'll probably casually keep an eye on teams like Georgetown, my attention span won't be all that high.

All the signs point against a win, but Pitt has these tendencies to play well against better teams. They've also beaten ranked Georgetown teams in DC the past two times. The thought of going into an 0-3 hole isn't all that appealing, either, and maybe Dixon is getting them ready to play. I picked against Pitt last year and that didn't work so I'll take them this time around. Panthers 65, Georgetown 61.