The Casual Awards: John Caprio and David Allen For The Win

Share All sharing options for: The Casual Awards: John Caprio and David Allen For The Win

The Georgetown Hoyas throttled the Seton Hall Pirates last night 74-52 in a most relaxing fashion, never trailing at any point and leading by close to a 20 point margin throughout the 2nd half. Before we flip the switch to our weak coverage of the St. John's game, we're handing out hardware to those most deserving. Away we go!

The Chris Wright Heart of a Champion Award:
This game is going to be remembered as the game where walk-on John Caprio checked in with over 4 minutes remaining in the FIRST HALF and saved our season. So on a night that saw Otto Porter do his thang with 20 points and Markel Starks contribute a steady 16, this vaunted award goes to Mr. Caprio, who played 12 surprisingly effective minutes and finished with a team-high 6 rebounds. Congrats, John!

Lord Voldemort Award:
The Hoyas were cruising right along and led by a bunch when Otto Porter picked up his 2nd foul just 8 minutes into the game. What followed after Porter headed to the bench was not at all casual, an offense that struggled to get off any good looks and a defense that allowed Seton Hall to go on a 12-3 run to get back in the game, though just for a short time. For some reason I had a bizarre LOST-like flash forward to March when the Hoyas were playing Oregon in the round of 32 and Porter picked up a 2nd ticky tack foul 80 feet from the basket and headed to the bench as our worlds collapsed around us.

John Starks Memorial Award:
D'Vauntes Smith-Rivera isn't afraid to shoot the rock, and even though he's 4-19 over the last two games he has found a special place in the hearts of Hoyas fans as they really don't seem to care that the ball isn't going in the hoop. DSR has really stepped up in Greg Whittington's absence and even though the shots aren't falling, they certainly look nice leaving his hand and he has contributed in other facets of the game especially on defense and rebounding. The one downside is that he has shown a propensity to throw the lazy pass down and then, which promptly led to his removal from the game last night.

Document Your Lunch Award:
Ooh, a spicy chicken sandwich at the Verizon Center before the game! Sign me the fuck up! 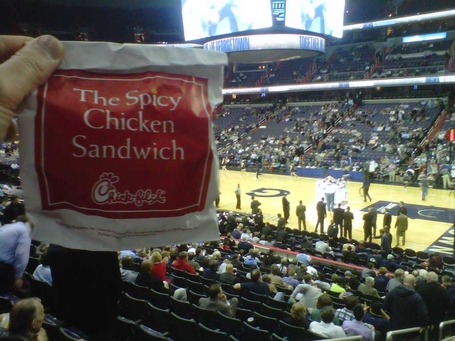 Steve Jobs Award:
I have been a staunch Android supporter and my Samsung Galaxy S 3 can do everything except fly, but something in my being was stirred at the sight of the new Blackberry. Not that I'd want the new one, of course, because RIM/Blackberry technology blows goats, but still. I think Blackberry still has a place in my cold, dark heart.

Steve Jobs Award II:
The WatchESPN app has to be one of the best apps of all-time. Game not being shown on TV in your region? Who cares! Whip out your casual mobile device, click on the WatchESPN app and BOOM, a beautiful picture with great audio awaits! Tremendous upside, was even able to watch the team miss free throws while walking Teddy. 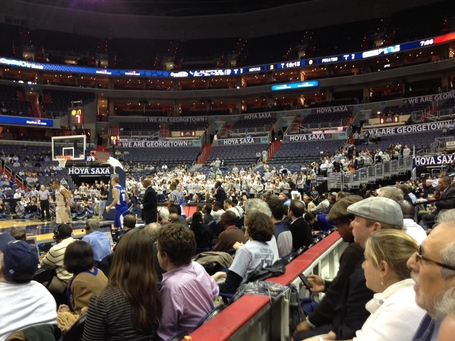 Adrienne Balboa "You Can't Win" Award:
Ingenious move by whatever sponsor it was that selected what were possibly the worst two contestants of all-time to attempt to hit a free throw and halfcourt shot during the game last night. Two girls were plucked from the stands, neither knew how to even dribble, one fell down and the night was filled with the sad sound of airballs. Brilliant. 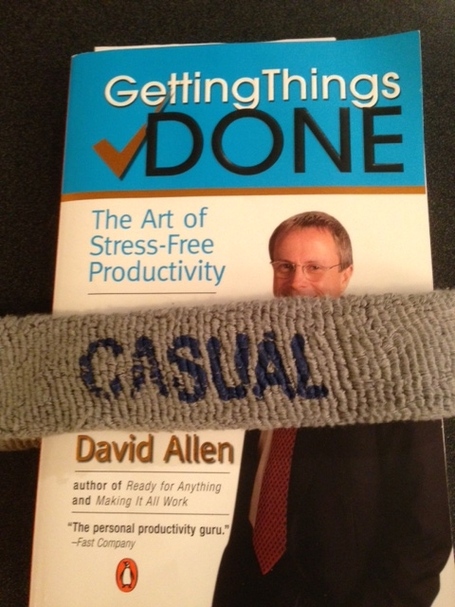 Salvage Your Dignity Award:
Our favorite t-shirt gatling gun guy was resplendent in gray ahead of the upcoming Gray Out against St. John's on Saturday: 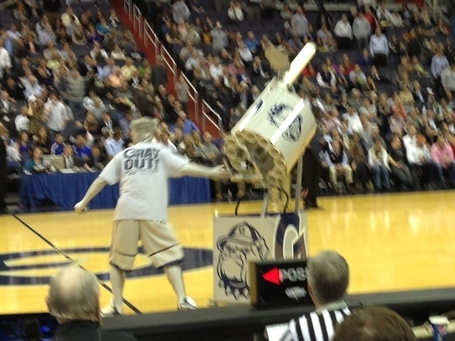 Sometimes 3 Against 1 Just Isn't Enough Award:
Kudos to Seton Hall for blowing a 3 on 1 break in spectacular fashion last night, finishing its odd man advantage by getting the ball into the hands of immobile center Eugene Teague, who promptly barreled himself into the lone Hoya defending the break for the charge. Thanks, dudes!

Time To Finally Class Up This Joint Award:
As the lights dimmed during play in the 2nd have, Casualties around the world wondered whether Ted Leonsis finally caved to the pleas of the Casual masses to put a damn dimmer switch in Verizon. However, our dreams were quickly dashed when we learned that the lights dimmed due to the severe weather surrounding the arena. Bah humbug!

The Hoyas are now 2-0 since I purchased this casual New Orleans Pelicans hat and have improved to 5-1 in Casual, Jr's lifetime.

Kenner League Award:
Towards the end of the game last night the Hoyas featured a lineup of Bradley Hayes, Brandon Bolden, Stephen Domingo, John Caprio and David Allen. And it was awesome.

Is Georgetown Good Award:
The Hoyas are now 5-3 in the Big East, and aside from the blowout loss to Pitt could very easily be 7-1. Still not sure how the Hoyas are 5-1 without Whittington and a true center, but hey, we'll take it! All aboard the Delusion Train!