Your Fighting Hoyas of Georgetown return to the court at Verizon this evening against the Seton Hall Pirates, and as usual we here at THE AWARD-WINNING GLOBAL PHENOMENON are bringing you everything you need to know about Georgetown's next opponent. Here to dish on the Pirates scene is Brendan Prunty, Newark Star-Ledger journalist extraordinaire, who provided the below casual answers to our hard-hitting questions. Brendan, this bomber of CasuALE is for you. Let's do this.

Let's talk for a minute about Kevin Willard. I know Seton Hall like him, but has he done as much in his tenure at the Hall so far to affirmatively say his job isn't in jeopardy? If the Hall were to open up a job search, who would you like to see at the top of the list?

Let's put it this way: The only people in the land with more job security than Kevin Willard wear black robes and swear in Presidents. While that's not exactly true, it's not far off either. Willard is about as secure as you can get these days in college basketball. While not public, he was given a long-term deal when he started in South Orange because the program was such a mess in Bobby Gonzalez's aftermath, that most expected it would take 4-5 years for him to start turning it around. He did that last year in his second season, falling a win or two (depending on who you talk to) shy of making the program's first NCAA Tournament since 2006. His boss is his good friend and former boss at Iona, Pat Lyons, so it would take a colossal misstep by Willard to get tossed by him. This season will not be a pretty one when all is said and done, but they are going through the Big East without a Big East-level point guard (Tom Maayan isn't there yet) and have been hit hard with injuries all year long. After last year, it's safe to say he's going to get a pass for this one.

But I'll play along. However, I honestly wouldn't even know where to begin if Willard left/was fired tomorrow for a replacement. Seton Hall has not been one of the league's higher-paying jobs since Tommy Amaker left a decade ago and even if the Catholic 7 takes off, I don't see that changing all that much. So, gun to my head right now if Willard was out tomorrow, I would imagine the school could give serious consideration to a guy like John Dunne from Saint Peter's. He's a former Pirates assistant under Louis Orr, is a terrific defensive strategist (despite low talent, Peacocks are always among the nation's defensive leaders) and knows how to do a lot with a little. People will want Shaheen Holloway, but I think he needs to run his own program at a lower level first before jumping up. Again, that's all speculation.

The Pirates are 13-7 and 2-5 in Conference. What's the best case scenario for the Hall this season? To put it another way, what finish would you be happy with?

The best-case scenario is they stay healthy. (I'm only half-kidding on this. I think if Willard had another freak ankle sprain in practice, Seton Hall would be doing walk-throughs in those American Gladiator spheres.) Record-wise? I think given the ups and downs of this year, Pirate Nation should feel pretty good with 6-12. The problem is getting to that number. Out of the remaining 11 games, they don't have a great shot a winning many of them. Based on history, they'll split with Rutgers (1); they can beat Providence on the road (2); but that's it right now. Even if you give them the token "surprising upset at home" win, that's still only five league wins. Fans might not like that, but that's not bad considering the limitations on this team.

Anyone other than Fuquan Edwin that Georgetown really needs to focus on?

Eugene Teague has been playing really well of late, and better that he's had some of the calvary arrive. He had 22 points on 9-of-14 shooting Sunday at St. John's and was a real focal point of the offense, because Fuquan Edwin was struggling and in foul trouble. But he seems to be playing well against teams in the league with better big men -- just look at his games against Notre Dame (17 pts.), Louisville (14 pts.) and now St. John's. I think it took a while, but this team is finally figuring out how to best use Teague.

If I have one night in South Orange, where am I eating and what am I ordering?

Having admittedly not spent a lot of time in South Orange, I'll give you the recommendation of Bunny's Sports Bar about a 10-minute walk down the street. Went there this summer with some friends. Pizza is good, wings are good and the beer is cold. That's all I need. I'm a cheap and easy date.

1. Bill Raftery. Come on. This is a college basketball/Big East-based blog. Did you expect me to choose someone else on this list? My favorite part of Raftery's existence are the stories. Tom Luicci, who covered the Big East and Seton Hall from the beginning -- before I was even born -- has the best collection of Bill Raftery stories. Luicci and the Bergen Record's John Rowe, both do, because when Raf was the head coach at Seton Hall, the writers used to travel with the team. So all of those legendary drinking stories Raf tells on TV? The beat guys witnessed 'em first hand.

2. Craig Biggio. I don't care what my BBWAA brethren say: He's a hall of famer. If I was eligible to vote, he'd have been on the ballot.

4. Max Weinberg. Had no idea he graduated from Seton Hall. I miss the old days when Conan was on NBC at 12:30 and the Max Weinberg Seven was the house band. 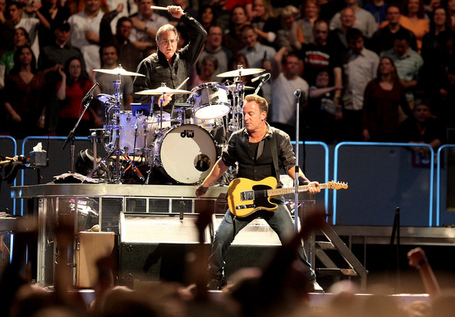 5. Dick Vitale. For all of the guff Dickie V gets for being pro-Duke or pro-ACC or anti-everything else, he's one of the reasons I love college basketball. He's a fan and that's OK. When something crazy happens, he goes crazy. When something goes wrong in a game, he overreacts. And for all his supposed Duke bias, he's always had the mid-majors backs when they were getting snubbed for the big boys a decade ago.

6. Samuel Alito. Has the most tangential relationship, having only served as an adjunct professor in the law school. Did receive an honorary degree though.

Are you pleased with the the whole Catholic 7/defection thing? Will everything be OK?

I've gone back and forth on this and I think I've come to rest that I am OK with this taking place. It's the closest thing that we'll get to saving "the Big East as we know it" in this day and age, and I think that's mainly what people wanted. These schools wanted hand and now they have it. No longer worrying about waking up and wondering if UConn or Cincinnati bolting for another league and the Big East crumbling, sending everyone searching for the nearest open conference. (Historically speaking, I'm still blown away by a scenario where Georgetown or Villanova are worrying about what Cincinnati does, but that's besides the point.)

Will everything be OK? I think it will. So far these schools have been smart in knowing their limitations and profiles and not trying to make this a super-powered conference. Having 10-12 teams, no further west than the Mississippi will work really well I think. Gonzaga and St. Mary's was a sexy option, but much like Boise State and San Diego State for football, it would've taxed both sides of the country, especially in these other sports where games are played more frequently. Perhaps they'll do some deal where those two schools will play 2-3 games a year against the C7, but I'm glad they stayed away as a whole. The key will now be inviting the right teams. Xavier, Butler, Creighton, Saint Louis and Dayton have to be the five invitees, if you're doing a 12-team conference. The 12-team concept is perfect for now and if the league really starts booming, you can always expand to 14. Anymore than that and you're the old Big East without the top-heavy talent, which will be problematic.

What are your thoughts on the Prudential Center? Do the students do a good job going to the games?

I don't know. The Pru Center is a very nice facility, but I don't know if it's the right fit for Seton Hall, to be honest. Now, granted, Seton Hall has not been very good since it moved into the place, but it always just feels so open. I don't think I've covered one game there where I've felt "Oh, yeah, Seton Hall has a discernible home-court advantage tonight." Look at it this way: Since moving in in 2007, Seton Hall will open portions (not the whole thing) of the upper deck in a few weeks. The reason? Syracuse is coming to town for the final time. That's not the sign of a great home-court advantage if you ask me. On the average, I'd say they get about 500 students for home games, maybe a few more for big games. And during non-conference games -- especially those played during winter break -- the building feels empty. It would help if Seton Hall got good again because the Pirates seem to have the most dedicated following in the state when the team is winning (Princeton is second) and I'd bet the building fills up. But right now, it's going to have to be what it is. Seton Hall isn't going anywhere and neither is the Rock.

Seton Hall's problem hasn't been getting started, it's sustaining that start. On Sunday, it raced out to a big lead against St. John's -- mainly because it traded defense to get offense -- but once the shots stopped falling, the Red Storm were right there. If the Pirates can consistently make shots, I think they've got a chance. But frankly, with Georgetown's length and Seton Hall's smallish lineup, I just don't see it happening.