Sleeping With The Enemy: The Golden Eagles Of Marquette

Under the covers with the Golden Eagles.

Share All sharing options for: Sleeping With The Enemy: The Golden Eagles Of Marquette

What's this? An actual basketball game! Hooray! As Georgetown shakes off the rust of not having a game since December 22nd of LAST YEAR and gets ready to rock its Big East conference schedule with a road test at Marquette, we here at THE AWARD-WINNING GLOBAL PHENOMENON are bringing you everything you need to know about our next opponent. Here as always to provide insight into all things Golden Eagle are our friends at Anonymous Eagle. Fun fact: We are such close friends with these homeslices that they created the very SWTE logo at which you are currently gazing at for us for no good reason at all! Isn't that special? Dudes, this can of Milwaukee's Best Light is for you. When you're done checking this opus out, head over to view our answers to their questions HERE. Let's do this.

Catholic 7 Internet High-Five! We are brothers FOR LIFE.

A smarter man than I once wrote: "I kind of envision the current state of the Catholic 7 like the scene in one of the early LOST episodes where Michael, Walt, Locke, Sawyer, and whoever got on a small boat and started paddling away from the Island."

We have to go back -- back to the way the Big East used to be.

Before we get into the nitty gritty about Hoyas - Golden Eagles game, what's your take on all of this defecting from the Big East shebango? Are you pleased with the developments from the Marquette perspective? Which schools would you like to see join us and where do you see the new Conference of God in the next 5 years?

My thoughts are best summarized by this video, only replace the "hims" with "Georgetown."

(Also: if we're casting parts, y'all would be Whoopi, DePaul would be Sister Mary Lazarus, 'Nova would be that dour Mother Superior, and I'd get to be the li'l red firecracker. Yeah, I took the best role. It's my hypothetical, make one of your own if you want the cherry gigs.)

I'm pleased as punch about the new conference, if only because we've decided to do SOMETHING. Sitting around waiting to see which middling CUSA football program was going to be added to pollute the Big East basketball pool was turning into a major boner killer. Y'all didn't start this league, and we didn't join it six years ago, to play in 3500-seat venues that are glorified shoeboxes, you know?

Regarding membership, I'd like to see us add five schools: Gonzaga, Xavier, Butler, Creighton, and Dayton -- Dayton not so much for the basketball, but because their fans are the most hilarious, self-loathing lot I've run across. I'm a pessimistic, self-loathing Marquette fan, but Dayton peeps make me look like your boy Glide Hoyas.

Where's the God-ference in the next five years? Sending 4-5 teams to the tournament every year, lauded as visionaries for getting out before the college football bubble burst (in case you missed it: attendance at the Sugar Bowl was barely over 50,000 last night), viewed jealously by the Pitts and Cuses of the world who've come to realize that playing in a 16-team superconference is a serious pain in the ass.


The Golden Eagles have struggled a bit this year, getting drilled at Florida by 33 points, losing to Wisconsin Green-Bay and playing uninspired basketball in a recent win over North Carolina Central. What gives?

We've been a motley crew of misfit toys (how's that for a mixed metaphor?) this year. Between talented kids who can't seem to put it together (Jamil Wilson) and kids who had to keep their noses in the books just to be able to play this semester (Todd Mayo) and kids who are struggling to figure out how to fit into a new system in a new city with new teammates (Trent Lockett), we haven't found a rhythm yet. Vander Blue has been mostly good, and Junior Cadougan seems to be coming around in the last month, but other than that, we're kind of a mess. Just as an example: in that game against UW-Green Bay, when we were down one with 5 seconds left, we ran a play that got a three-point look for a walk-on who's hit 20% of his three-point attempts all season. (He, uh, missed.) That was a thing that happened.


Buzz Williams sure has lost a lot of weight in recent years. Do you think this rapid weight loss was influenced in part by a need to compete with other Big East fashion plates such as JT3 and Jay Wright?

Buzz attributes his weight loss to swearing off sweet tea, which I'd never heard of before he came to Marquette but is apparently all the rage in the South. So I looked up the recipe, and I think he's on to something, because as far as I can tell, it's made by mixing four parts sugar, one part water, a bag of tea, and then you add sugar to taste. Dude was basically one of those hulk-size pumpkins.


As you are an esteemed blogger and I assume have taken basic science classes in high school, please share your reaction as to why it was seemingly impossible for the NCAA to realize that putting a court on a damn battleship in cold weather might actually result in condensation on the floor and ruin our openers on national television. How shitty was that!

Wait, you left out one part of the battleship + cold weather equation: we were playing in the FUCKING OCEAN. You mean this massive reservoir of water might make a hardwood floor a bit slippery when it's 50 degrees out? I didn't realize we needed to fly in Al Roker to advise the organizers of these events about the existence of the fucking DEW POINT.

I'm sorry for yellin', but this whole debacle chaps my ass, because, at least in Marquette's case, they knew this was going to be an issue two days before we played -- and did nothing. They could've put a fracking plastic bubble around the ship with the notice they had, but nope, it was: let's cross our fingers and hope water doesn't act like water. Good effort, shitheads.


Where do you see Marquette finishing in the Big East this year?

It's a cop out answer, but I genuinely have no idea. You could tell me we'd go 11-7, or 9-9, or 5-13, and I'd say: Yeah, I can see that. But that's life when you root for a team with zero reliable outside shooters that decides to attack a 2-3 zone by chucking 25 three-pointers in the general vicinity of the hoop.

(Casual Note to JT3 who I know is reading this: DEPLOY THE ZONE, DAMMIT!)


What would you consider a successful Marquette season to be this year? Make the Dance? Sweet 16?

Making the Dance would be great, based on how we've looked in the first two months of the season, but I'm really just hoping that Texas doesn't gas Rick Barnes at any point this year. Buzz has an awesome recruiting class coming in 2013, and I'd like to see them play together for one season before Buzz bolts for greener pastures. 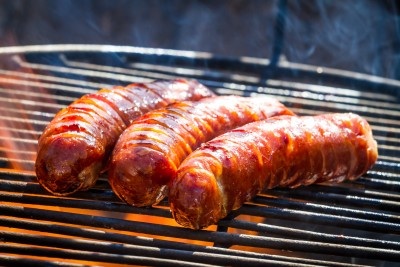 Now you're speaking my language. In no particular order:

(1) Bratwurst with onion and cheddar, grilled carefully so the cheddar doesn't go Old Faithful in your face when you take your first bite. A slight variation: jalapeno and cheddar brat. I've also sampled habanero chili and cheddar brats, which was an extraordinarily un-casual dining experience akin to eating a lit candle.

(2) Polish. And if you can throw some pierogi on the plate, I'll be your best friend for a day.

(5) This one probably isn't *technically* sausage, but when Mrs. Q and I are feeling low on sodium, we make ring bologna with canned, sliced potatoes and baked beans. We call it Salt Lick for People. (Related: had I been a contestant in the season of Top Chef Masters when they had Zooey Deschanel on as a guest judge, and she was all: "I'm vegan and gluten-free, plus I only eat things that don't have cells," I would have made her Salt Lick for People and arranged the food on the plate in the shape of a middle finger. God, I hate Zooey Deschanel.)

But whatever, we live in Wisconsin: boil it in some beer for 5 minutes, grill it, and we'll probably eat it.


Who are the players that Georgetown needs to watch out for on Saturday? Top scorers? Rebounders?

A switch seems to have flipped for senior point guard Junior Cadougan in the last few weeks: he's averaging around 15 points and 5 assists per, hitting his mid-range jumpers, and, for the most part, taking care of the rock. Junior Vander Blue is (finally) showing signs of becoming the player we all thought he'd be when he committed to MU four years ago: a lethal athlete, good around the rim, and we've upgraded his jumper from "ugly" to "ugly, but somewhat effective." Big man of multiple nicknames Davante Gardner is good for 15 points and 6 boards every game, but he's usually limited to about 25 minutes because of the innertube around his tummy. Jamil Wilson can be good when the spirit moves him, and Todd Mayo is our only real threat from distance, but Saturday's contest will be just his fourth game since his academic suspension ended.

Sources close to me tell me that if I don't pick Bruce, I forfeit our Best Blog Friends 4 Life card. Even if that wasn't the case, though, I'd pick the Boss, for two reasons: (1) his power-slide crotch-slam into the camera during the Super Bowl halftime show remains the most wonderfully fantastic thing in the history of American music; and (2) this old, jowly iteration of Billy Joel looks distressingly similar to former Wisconsin football coach Barry Alvarez.

Why do so many people in Milwaukee go to Marquette games? Seems like you guys always have a solid home court advantage.

Does it? That's weird, because we're usually bitching that, outside of our small-ish alumni base, nobody in the area seems to care about Marquette. Everybody who attended (or lives within 25 miles of) a UW Hyphen school invariably roots for the Badgers, and lots of folks outside of Milwaukee are skeptical about supporting Marquette because our kids have tattoos and one of them had corn rows once and that boy last year had dreadlocks. Hell, the local paper assigned a guy who may or may not have been dead as MU's beat reporter last season. (I believe his only attempt at a tweet was: "What a brilliant, warm white light. Mother, is that you?")

Anyway: if it seems like our games are well-attended, that's probably because it's moderately warm inside the Bradley Center and they serve beer there. But probably not in that order.

I looked at some old SWTEs, and I don't think I've ever picked Marquette to win against Georgetown. As per usual, your length scares the hell out of me. (TWSS?) Anyway, I see a rock fight, especially if you guys have watched any tape of Marquette and realize that a zone defense is like a goddamned Sudoku puzzle to us. Gimme the Hoyas by six, 56-50.