The Casual Awards: Concrete Jungle Where Dreams Are Made Of

Share All sharing options for: The Casual Awards: Concrete Jungle Where Dreams Are Made Of

The Fighting Hoyas of Georgetown temporarily staved off widespread panic in HoyaLand by traveling to New York City and crushing the Red Storm of St. John's 67-51 in a game that wasn't even that close. Before we here at THE GLOBAL PHENOMENON flip the switch and focus on Providence, we're handing out hardware to those most deserving. Away we go!

The Chris Wright Heart of a Champion Award:
John Thompson III. Whether it was by necessity after Greg Whittington's sudden suspension or planned after Georgetown's lackluster play against Marquette and Pittsburgh, JT3 pushed all the right buttons against the Johnnies while giving 8 players more than 10 minutes of playing time. The Hoyas needed a game like this badly. Like really really badly. Honorable mention to Otto Porter who had 19 points and 14 rebounds in a game he needed to step up in. Like really really badly.

Mobile Device App of The Millenium Award:
Watch ESPN. Dudes, this thing is the tits! Need to go to Starbucks at 10am central when the Hoyas are about to tip in order to pick up a venti nonfat chai with no water and no foam for your wife who just gave birth? NO PROBLEM! HD clarity and outstanding quality for Hoyas-Johnnies via Watch ESPN, and as a bonus, if you want to call me to chat which would interrupt the game, I can send you straight to voicemail at the press of a button!

Big Man U. Award:
The Mikael Hopkins Experiment has taken a turn for the horrid in Big East play, and this game against the Johnnies was the worst one yet. 1 point, 1 rebound and 5 fouls for Hopkins in just 10 minutes finally forced JT3 to give us all an extended look at Moses Ayegba. For his part, Ayegba continued to flame the fire of Hoyas fans who have clamored to see more of him on the floor, and even though he had just two points and three rebounds, Ayegba showed that he can play productive minutes for the Hoyas.

More Proof That ESPN Sucks Award:
This was from the ESPN recap of the Hoyas win: ""Otto Porter had 19 points and a season-high 14 rebounds, and Martel Starks had 17 points for the Hoyas (11-3, 1-2 Big East), who certainly didn't look like a 48-point team." Martel Fucking Starks! Eat my ass, ESPN!

Setting The Damn Tone Award:
Jabril Trawicks's emphatic dunk on Georgetown's first possession was a welcome site for Hoyas fans and set the tone for the rest of the game. Play Jabril Trawick as much as possible as far as I'm concerned. He gives a damn.

Old Balls Award:
Jesus christ I am so happy I am not a Denver Broncos fan. I've been to a lot of sporting events in person and I can't imagine what that would have been like. So close, yet so far:

Thank You, Steve Lavin Award:
I don't know if the Hoyas woke up or St. John's just flat-out stinks, but the offense was firing on all sorts of cylinders. There was plenty of space to roam all over the floor and Georgetown pushed the ball up the court and dictated a tempo that we usually don't get to see. Is this a sign of future things to come from this Hoyas team? I guess we'll just have to wait until the Providence game.

Lord Voldemort Award:
I really hope Greg Whittington's suspension is a one game thing but I am mentally prepared for a multiple game absence. Georgetown can survive games against Big East bottom feeders without Greg, but absolutely cannot beat better teams without him. 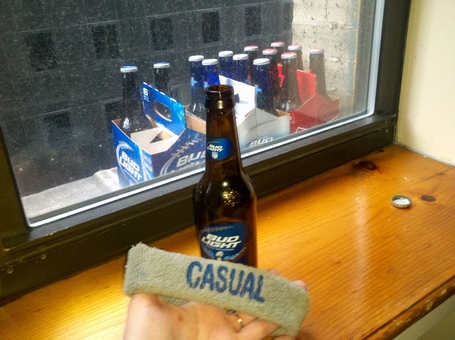 Casual Transportation Award:
ThunderTrain. Big ups to the dozens of casualties who for the third consecutive year braved the treacherous rails of the metroliner from DC to NYC, invaded MSG and left with yet another Hoyas win. On behalf of the Board of Gimps here at THE GLOBAL PHENOMENON (and no doubt the many bartenders in bars in the immediate vicinity of Penn Station), we salute you.

Who Is This Guy Award:
D'Vauntes Smith-Rivera. DSR came into our lives as a volume scorer off the bench but has basically vanished since. On Saturday, however, he re-emerged as a primary ball-handler (shut up, Beavis) along with Markel Starks and a force underneath the basket, grabbing 10 rebounds. DSR continues to struggle to find his stroke (shut up, Butthead) and shot just 3-11 from the floor, but I think the Hoyas are better off getting DSR the ball often and I think he needs the chance to shoot himself out of this little slump.

Dimmer Switch Award:
A lot has been made of the lack of a dimmer switch for the court at Verizon Center ruining our home court advantage while at the same time blinding the fans in the stands, and our record in arenas with said dimmer switches is now 3-1 after the 2nd win at MSG of the season while the record for games looking so much more casual in arenas with dimmer switches has improved to 4-0.

Promotion Award:
Aaron Bowen. In his limited minutes throughout his Georgetown career, Bowen has shown great hustle and still hasn't met a shot he didn't like. Bowen has leapfrogged Stephen Domingo off the bench and in a career-best 16 minutes against St. John's finished with 5 points on a nice three from the corner and his patented garbage time dunk. His best move for me, however, was when he took it to the hoop for a dunk attempt that was blocked by Chris Obekpa. That kind of aggression on the floor is what we need more of and I'd like to see what Bowen can do.

The Jim Nantz Award for Casual In-Game Commentary:
Here are a few golden nuggets from the casual game thread:

Whittington is not playing today

Trawick is in flight

Mikael has a missed dunk, a blocked layup, and a foul. Why don’t we sub?

Hopkins is trolling us

Nothing better than georgetown basketball to alleviate a hangover

DELUSION TRAIN BACK ON TRACK!

but seriously, where has this been?!

For those of you Bowen backers

I really genuinely think what’s holding him on the bench is he values style over results, and it bites him in the ass. I’m sure that drives III crazy.

DSR playing well is probably the thing this team needs most.

When everyone is cold, we need some type of scorer off the bench.

That was a Jonathan Wallace trajectory

The lighting in here is really incredible. My Ultimate Casual Award Award:
This one goes out to Casual, Jr. who entered the world on Wednesday night weighing in at 6 pounds and 10 ounces and just in time to hopefully turn around this season for the Hoyas. Pretty casual dude so far, though I could really use some help in the swaddling department. 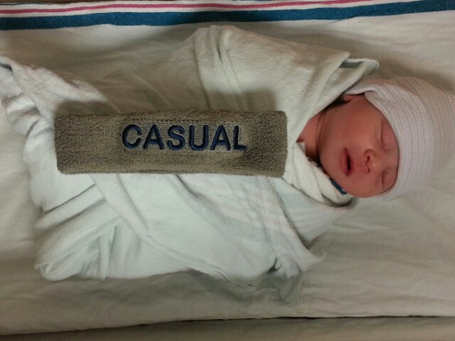