Under the covers with the Red Storm.

Your soon-to-be unranked Georgetown Hoyas look to rebound tomorrow MORNING from an epic trouncing and as usual, we here at THE AWARD-WINNING GLOBAL PHENOMENON are bringing you everything you need to know about Georgetown's next opponent: The Red Storm of Saint John's. Here to supply us all with wondrous knowledge is Norman aka Pico from Rumble In The Garden, the greatest Red Storm blog in the universe. Norman aka Pico this picture of chicks playing beer pong is for you. When you're done here, check out our answers to their questions HERE. Away we go!

St. John's notched its signature win of the season last week in a nail-biter against then #14 Cincinnati.
What did the Johnnies do in that game that they were not able to during their three losses in November and December to much lesser competition?

You know how Whitney Houston sang that the greatest love of all is learning to love yourself? (Is that song turning 30?) For St. John's, the greatest rebounder of all, the cure to their ills on the glass seems to be... Learning to pound the glass themselves. They soared to great heights with Chris Obekpa staying earth bound to corral boards, with D`angelo Harrison looking to own every long miss, and with combinations of all those other lengthy athletes on Steve Lavin's bench.

It helps that the Red Storm took away Sean Kilpatrick's favorite looks, made the Bearcats hurry, and didn't let the Cincybigs get demoralizing put backs.

Add in a taste of patience, grit, and a shot that no one practices, Cincinnati saw the L.

Talk to me about D'Angelo Harrison. What makes him such a potent offensive threat? How can the Hoyas shut him down? Do you think he stays at St. John's beyond this season?

He's Matt Murdock's alter ego. He's a smart player lacking a strong conscience about what shots he should and should not take - and it fits his talent. Not saying he's Mike Rosario at Rutgers or Jeremy Hazell, but D`Angelo knows that his aggression fits the style of St John's play - effort, fearlessnes, effort, an attacking, aggressive style. He embodies what Lavin wants out on the court.

How do you rate Steve Lavin's performance so far at St. John's, granted he has only been on the court for one full season? Do you think Lavin thinks of St. John's as a long-term spot, or will he use it as a stepping-stone to get back to the west?

The "how is Lavin doing" question is becoming a warm topic in New York - impatient fans always want to see their team win in year two or year three if their new coach's regime, and its not that easy. It's especially not easy when the team misses its coach for a year, and when the previous coach leaves 9 or so seniors and a couple of not-Big-East players (one player rides the deep pine at Kansas State, one played a year at Grambling and scored a lot in the SWAC, one is playing in a D-II school in West Virginia).

So that has to be considered.

Given those caveats, he's doing decently. The team could use a little more cohesion, and there are style factors that many NYers won't really be feeling unless the team wins that are just Lavin staples. And those factors aren't just about style, they're about the things a team needs to do to in in the modern NCAA (like three-point shooting and drawing free throws).

But I don't think Lavin will go west. Maybe if the Cal job opens and they want him (two very different things), maybe Stanford. I could see him going back to the Bay Area. But UCLA wouldn't take him back, USC wouldn't want a former UCLA coach, and he's not one to work at a lower level, lower revenue program. I could always be wrong, but I see him staying in New York, the hip town with the bright lights and fame for him to sell recruits.

So... about this Catholic 7 thing... it's going to work out, right? Who else would you like to see in the conference when the dust is settled. Are you done associating yourself with football-playing schools?

Me, I'll associate with anyone! The school... yes, I think they are done associating with football schools, mostly because in the current environment those schools won't want to associate with basketball-only programs. I think the hoops-only conference will work in some fashion; the schools will play some competitive games. Georgetown should be solid - a track record of recent success and a coach with a connection to the school. The other BE hoops schools... Well, they better get into winning some games soon or else they won't see the NCAA tourney more than every six/ seven years.

Georgetown suffered its worst home defeat since 1974 against Pitt on Tuesday. They have scored less than 50 points on four occasions this season. Be honest, are you concerned about this game or looking ahead to Notre Dame?

It would take a dang gum fool to overlook the Hoyas. The Hoyas are large and can rebound and are patient and beat St. John's the last three games.

The Johnnies and their fans are in no position to overlook any team after not cracking 60 in the last two games. Or against Fordham and NJIT. That's not just an issue of pace, the team is working out shot selection issues and integrating a roster of athletes to create a cohesive whole, a fast-breaking Voltron, a Frankendunk monster.

(Editor's Note: Thanks for making us feel better)

Friends pick friends up when they are down (via www2.realtoractioncenter.com)

The blogger CasualHoya and his wife just had a baby. I dare you to Tell me why he should not name his son Sir'CasualHoya.

Because... Because... Casual'Gift Hoya is almost as good a name? I can't hate on Sir'Casual. And Mazel Tov to the Casual Hoya, good dude and it's always a nice moment to see folks I've been e-talking to move on to that phase of their lives.

You have $10 to spend on lunch anywhere in NYC; where do you go and why?

Wow. Hard question. My answer will be crap b/c I'm not in NYC (but I visit often).

The problem is: do I go for food I don't really get in Chicago, like a good Jerk Chicken in downtown Manhattannfrom a food cart (there's also a chicken and Mac place that's really good near the Seaport) - the old favorites? Do I go for convenience, places like Shake Shack or Soho Park?

I'd probably hit Brooklyn for this fancy sandwich place called No.7 Sub or swing down to the old Park Slope haunt and eat at Parco. That's my every time-I-visit joint.

Or maybe I just grab a slice, a knish, and eat some sick baked goods or ice cream. No cupcakes. Cupcakes are for girls.

It's going to be a long slog. I think the Hoyas, right now, look like they could lose. That's not trash talk - they look like they actually don't know how to score (as you intimated in your responses to my questions). I'll be eating these words I am sure, but St. John's wins, 56-54. 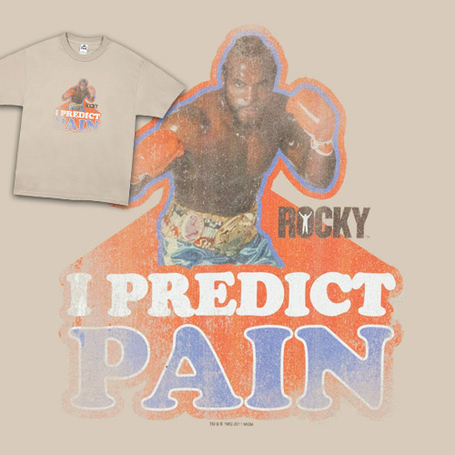 Well, this should be fun! (via shirtoid.com)