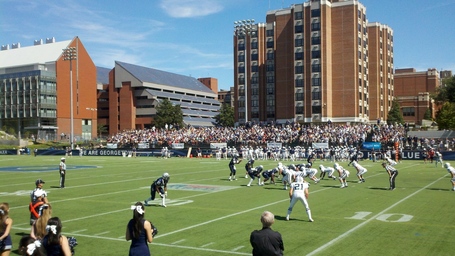 The Hoyas enter the game coming off a narrow 24-21 loss at the hands of Yale, a game significant for a couple of reasons. First, this was the sixth straight time the Hoyas have lost to Yale. Second, I was at the game! The Hoyas looked good on a picture perfect day on campus and had numerous chances to win, but missed field goals, a number of untimely turnovers and a 98-yard touchdown by Yale on what was one of the more impressive fluke plays with just seconds left in the first half were too much to overcome.

Everything you need to know about Hoyas - Tigers after The Jump:

Friday will already be a night of firsts for the Hoyas, as they will play its first Friday night game under Head Coach Kevin Kelly and will be making its first nationally televised appearance. The Hoyas will also be looking to win its first game against Princeton in program history and score its first points against the Tigers. In five previous matchups from 1903-1923, the Hoyas are 0-5 and have been outscored 79-0 in those games. GU will also be looking to snap its streak of 13 consecutive losses to Ivy League opponents dating back to 2003.

Georgetown vs. Princeton: Sons of Former NFL Great Steve Atwater Follow Different Path (Washn) | mlive.com
Atwater's oldest sons, Stephen and DiAndre, aren't playing big-time college football like their father did at Arkansas: Stephen is a junior defensive back at Georgetown, while DiAndre is a freshman running back at Princeton.

The proud old Princeton tiger
Is never at a loss.
But the yell of all the yells,
The yell that wins the day,
Is the "HOYA, HOYA SAXA!"
For the dear old Blue and Gray.