Though it is tough to top last week's entry in the Internet's Greatest Feature at The Olympics or the week before that's Casual Building Implosion, here we are with a first look at Washington Redskin and future Hall of Fame QB Robert Griffin III's first ever huddle! 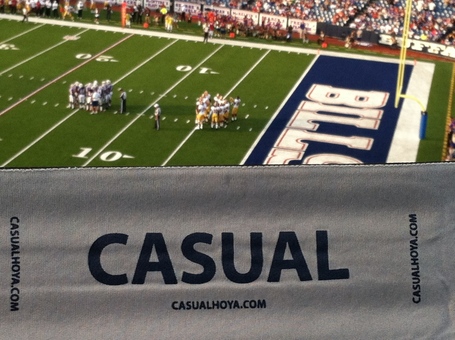 This shot was taken from what appears to be a relatively cheap corner endzone seat at last night's preseason opener between the Redskins and Buffalo Bills at Ralph Wilson Park in scenic Buffalo, New York. Though you will likely destroy your eyes trying to locate the surprisingly small Heisman Trophy winner in the photo above, center your attention directly between the 'S' and the 'U' in the majestic Casual Slap Coozie in the foreground or click on this and zoom until you just can't zoom anymore.

No more pics but lots of words after The Jump:

1) tickets to Hoyas games (including and likely limited to the home game against Longwood!);
2) a DRINK FOR FREE ON CASUAL'S TAB during the 4th Annual Casual Extravaganza ("CX4") next season AFTER THE SYRACUSE GAME ON MARCH 9TH which may or may not include special guest stars Allen Iverson and mermaids;
3) invaluable shares of Facebook stock;
4) an Orange urinal;
5) the basketball court at the new Georgetown athletic facility to be completed in the year 2080 named in your honor.