Your long wait is finally over. Enthusiasts of lunch documentation can once again rejoice, as beginning today and lasting throughout the month of August, THE GLOBAL PHENOMENON brings you the best (and worst) of your very own lunch documentation in its award-winning feature Document Your Lunch. For the third consecutive year, join us on a lunchtime culinary journey across the the planet, as the pictures of the very foods you choose to spend your hard-earned money on during the one hour of freedom you have at your jobs, are brought to life and shared with the rest of the world. If you're lucky, your documentation may even get retweeted by Anthony Bourdain. 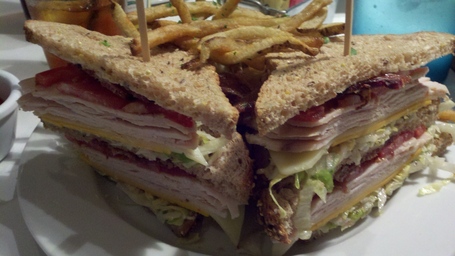 What: What better way to introduce this year's #DocumentYourLunch feature than with a sandwich, and the undisputed King of Sandwiches, the Club Sandwich. This behemoth comes straight at you from the Tavern at the Park in Chicago, Illinois. As you can see it's a heaping pile of turkey, bacon, cheese and lettuce and accompanied on its plate with a very generous portion of fries. Did I get a side of thousand island as well? YOU'RE DAMN RIGHT I DID.

WHAT DID YOU HAVE FOR LUNCH TODAY?

You can #DocumentYourLunch by simply taking a pic of your lunch and sending the documentation via tweet to @casualhoya or via email to casualhoya@gmail.com.

Tell us what it is, where you got it and how much you paid for it, and in addition to a chance to win a casual lunch with me, your lunch will be shown to the masses and we'll make you famous and cool so you can get chicks (or dudes).

Note: Starting tomorrow, #DocumentYourLunch moves to twitter so as not to clutter America's Most-Read Georgetown Hoya's Blog with pictures of lunch foods, which may or may not make you happy. So, if for some reason you aren't already following THE CASUAL TWITTER FEED, do so now or forever hold your peas.

This is the greatest daily feature in the history of the world wide web.

www.CasualHoya.com: Fighting Through the Dog Days of August and Documenting Lunches Since 2009.