It's been awhile since we last dropped an entry in The Internet's Greatest Feature, so we're coming back at you with a bang. This week's submission takes us to New Orleans, Louisiana where just last week the city decided to IMPLODE A BUILDING. Indeed, the old Grand Palace Hotel is no more, and THE GLOBAL PHENOMENON was there to document it.

Casual before and after pics after The Jump: 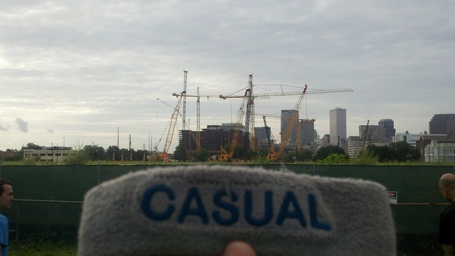 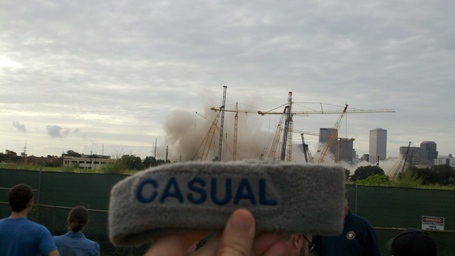 ABC News:
The old Pallas Hotel on Canal Street, also known as the Grand Palace, was blown up at 8 a.m. with 400 tons of explosives, creating a huge plume of smoke. State officials say the demolition went smoothly.

The city closed several streets and Interstate 10 before and after the demolition. The interstate was reopened Sunday morning.

The demolition took place to make way for the new University Medical Center, a hospital being built to replace the old Charity Hospital, which was closed after Hurricane Katrina struck in 2005 and flooded the hospital's basement.

The Pallas Hotel was one of the last buildings remaining on the site of where the new hospital is being built. The building, originally called Claiborne Towers, has changed hands several times since its 1950 opening but has sat abandoned as a hotel for many years.

Mayor Mitch Landrieu called the implosion "an important milestone" for the city and its plans to build a biomedical corridor.

What Mayor Mitch Landrieu did not tell you is that the explosions were so violent that the ground shook and were so loud that car alarms miles away were sounded, as documented in the Nobel Prize winning video above. Also funny in the video above is the dude on the bottom right's expression just as the first explosion sounds. BUILDING IMPLOSIONS ARE THE BEST.

Casual Headband submissions have been flowing in from all corners of the earth, and we'll be unloading our casual coffers over the next few weeks with the Tournament to determine the ultimate winner coming in October. For those that have yet to play in our wicked game, to enter the 2012 Casual Headbands Summer Series Contest, follow the following simple steps:

1) tickets to Hoyas games (including and likely limited to the home game against Longwood!);
2) a DRINK FOR FREE ON CASUAL'S TAB during the 4th Annual Casual Extravaganza ("CX4") next season which may or may not include special guest stars Allen Iverson and mermaids;
3) invaluable shares of Facebook stock;
4) an Orange urinal;
5) the basketball court at the new Georgetown athletic facility to be completed in the year 2080 named in your honor.