Kenner League 2012: What Have We Learned So Far?

Share All sharing options for: Kenner League 2012: What Have We Learned So Far?

Dos semanas of 2012 Kenner League action are in the books, and Kenner League's usual array of schedule changes, delayed starts and cameo appearances from the ghosts of Hoyas past did not disappoint. On Saturday the games started later, on Sunday the games whizzed by quickly, and former Hoyas Jeff Green, Greg Monroe, Jon Wallace, Nat Burton, Tyler Crawford.and Sead Didzarevic all grabbed some playing time over the course of the weekend. Here's what we've learned so far:

Otto Porter: Good things all-around for Hoyas fans as far as Porter is concerned. Returning from his national summer camp circuit during which he received a lot of praise, Porter played with his Tombs squad this weekend and looks ready to be the focal point of Georgetown's offense this season. Though not the most flashy player, Porter did everything that his team needed of him to win games: scoring when needed, grabbing rebounds, dishing assists and coming up big on the defensive end with steals and blocks. He's efficient, his basketball IQ is off the charts and he's a double double waiting to happen. In all of his games so far he's scored 20+ points and had double digit rebounds. I would not be shocked to see him average a double double this year. There's no reason Otto cannot challenge for Big East Player of the Year and MVP of the Universe.

Player snippets and more hyperbole after The Jump:

Markel Starks: Starks wasn't as good as he was last weekend, though does appear to have a quicker first step and got his teammates involved in the offense even though his jumper wasn't on target. Starks continues to play with confidence and showed signs that he is ready to emerge as a team leader. The big question with Markel is going to be whether he can be a consistent point guard for Georgetown this season. It's hard to be sure how well Kenner League performances will translate. Markel is great at using his speed to cut through the seams in the open style of play of Kenner League. But those seams won't be so open in the Big East. He had a good repore with Nate and they ran a number of good plays with each other off of screens including an alley-oop. I have high hopes that Markel will make a leap to consistency this year.

Mikael Hopkins: Despite drawing a difficult defensive opponent in Jeff Green, the big fella looked good, showing off a few new post moves and an improved passing ability. With the exodus of Henry Sims and real questions surrounding what contributions (if any) Georgetown will be getting from Moses Ayegba, Tyler Adams or Bradley Hayes this season, Hopkins is going to play a major role on this Hoyas team, so his progress this summer is one we will be watching closely. Needs to be more aggressive underneath.

Nate Lubick: Nate's two defensive assignments this weekend were Mikael Hopkins and Greg Monroe, so his stat lines look even more impressive with those facts in mind. Nate was able to score on a variety of post moves over both defenders (hook shots, up and unders, drop steps). He also played solid defense even blocking Monroe's shot twice although one was canceled out by a teammate fouling Greg as well. Nate still looked a bit shaky from the line and his free throw stroke did not look as fluid as his three point shot.

Jabril Trawick: By now we all know that Jabril is the guy Hoyas fans are looking to to bring toughness to the squad. His play in Kenner has done nothing to change that, as he continues to play aggressively at both ends of the court. Jabril's DCX team is full of talented players and as a result, he and Greg Whittington aren't asked to carry the load to the same extent that say DSR and Otto have been for The Tombs. This was my first look at Jabril this summer and he looked very similar to what we saw last Kenner League. The kid is just tough. He wills his way to the hoop finishing through contact. He also had the same penchant for foul trouble he had last summer picking up 4 fouls in the first half. He and Greg both had some difficulty guarding and getting past former UNC swing man Marcus Ginyard. His game on Sunday was a blowout, so we didn't get to see him react in a crunchtime situation, and the big question for us is whether Jabril is going to contribute more this season at the 1 spot or the 2 spot, given the emergence of D'Vauntes Smith-Rivera.

D'Vauntes Smith-Rivera: Speaking of which, DSR was again a huge bright spot for the Hoyas, showing off a vast array of tools offensively and getting his teammates involved as well. DSR played both guard positions and scored from all over the floor. On the downside he tends to over dribble at times and he doesn't have the best court vision in the world ( he definitely misses open players a fair bit), but in a pinch he's showed he can play some point guard. He continued to show his offensive versatility by both getting to the hole and pulling up in the mid range. The big question with DSR will be how much he can improve on the defensive end, as he will need to earn JT3's trust before getting big minutes.

Greg Whittington: A ho-hum weekend for Greg, though this isn't a negative. His games were blowouts so we didn't get to see that much, but he was active while out there and seems to feel a bit more comfortable closer to the basket than he was last season. Still needs to be a bit more aggressive if he is to become one of Georgetown's main offensive contributors, and if he decided to dedicate the next couple months solely to eating and lifting I'd be fine with it.

Brandon Bolden: It was an interesting weekend for Bolden. After making an early defensive mistake he got yanked a few minutes into the game on Sunday and sat almost the rest of the half. When he finally got back in near the end of the second half, he committed a charge and was promptly sent right back to the bench and headed to the locker room early. In the second half, The Tombs seemed to deliberately try to get him the ball in position to score, and 14 of his 18 pts came off of dunks. I'm sure Hoya fans who have been screaming at Hoya big men to just dunk the ball for years will love watching him play.

Moses Ayegba: Not sure what the deal is with Moses, but he played as much as I did this weekend. I can understand if the staff wants to take it easy with him especially coming off injury and having lost him last season due to an injury in Kenner, and I hope that's the reason he didn't play and not some sort of flare-up. Again, if he can stay healthy he can earn some roation minutes, but that's becoming a big IF.

Aaron Bowen: Aaron's 'Emery Heights' team is coached by Kenner League Legend Rodney Turner and has a full bench, so as a result Aaron got lost in the shuffle at times. He came alive in the second half on Sunday scoring 7 of his 9 points after the break. He did most of his damage on pull-up midrange jumpers which was a nice diversification to his game that in the past has only consisted of threes and dunks. Not to disappoint his loyal fans in attendance, Aaron did have a nice throwdown for old time's sake.

John Caprio: Before the game I was seriously considering not taking stats for Caprio and walk-on David Allan as they had been playing bit parts in the action thus far. Boy am I glad I never listen to myself. Caprio had an offensive explosion, almost scoring 20 points and grabbing 10 rebounds, and was very active crashing the boards and scoring. Sure he's still not likely to play much in season, but it's great to have that kind of talent at the end of the bench. It makes practices better and improves the overall quality of the team. The sudden rivalry with walk-on David Allan is going to be juicy.

David Allan: Allan is quick off the dribble and seems to find his way into the lane with relative ease. His outside shot wasn't on, but that certainly didn't seem to discourage him from taking it, which is a good sign this season when fans are clamoring for him to shoot it in the final moments of garbage time.

Tyler Adams: Tyler Adams has been medically cleared but the staff is being very cautious with him. I doubt he plays at all this summer and it may be a bonus to expect he contributes anything this season.

Bradley Hayes: We're still waiting for Georgetown's newest big man to play some ball this summer, and this week it was a strained MCL that kept him out of action.

Stephen Domingo: Domingo was in attendance to watch his new teammates play but won't see action this summer. For now we'll just have to settle for cute pictures of him with Jabril Trawick. 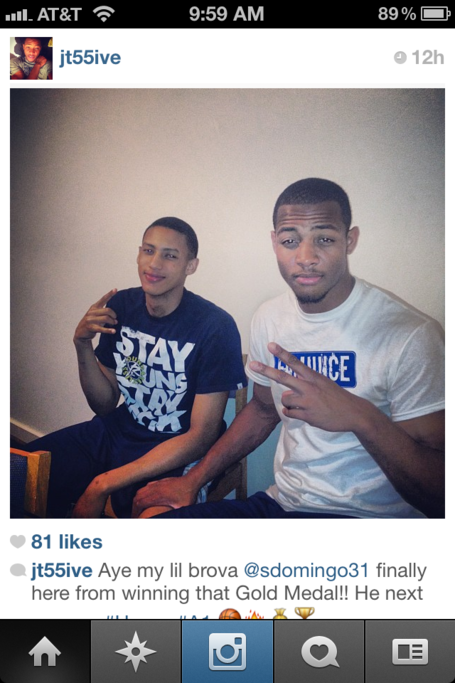