This week's entry in The Internet's Greatest Feature takes us ONCE AGAIN to Sarah Palin's Alaska and this time to beautiful Glacier Bay National Park! 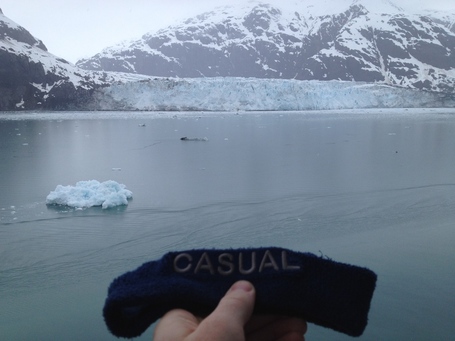 The Titanic was sunk by an iceberg

Did you know that no roads lead to the park and it is most easily reached by air travel? Did you also know that during some summers there are ferries to the small community of Gustavus or directly to the marina at Bartlett Cove? Did you also also know that despite the lack of roads, there are over 400,000 visitors each year most of whom arrive via cruise ship just like this casual documenter apparently did?

How to enter the contest after The Jump:

Casual Headband submissions have been flowing in from all corners of the earth. For those that have yet to play in our wicked game, to enter the 2012 Casual Headbands Summer Series Contest, follow the following simple steps:

That's it! You'll be automatically entered to win a treasure trove of wonderful prizes, all courtesy of America's Most-Read Georgetown Hoyas Website. Each and every Friday from today through Labor Day (or perhaps beyond), your Casual documentation will be displayed RIGHT HERE, and the ultimate champion will once again be selected by your vote. Prizes already secured from various generous donors include:

1) tickets to Hoyas games;
2) a DRINK FOR FREE ON CASUAL'S TAB during the 4th Annual Casual Extravaganza ("CX4") next season;
3) invaluable shares of Facebook stock;
4) a now permissible "impromptu" on campus party thrown just for you!
5) the basketball court at the new Georgetown athletic facility to be completed in the year 2080 named in your honor.