Share All sharing options for: Class of 2012 Center Bradley Hayes Commits to Georgetown

Class of 2012 center Bradley Hayes (Jacksonville, FL) has signed a letter of intent to join the Georgetown Hoyas. The 6'10" Hayes, who visted campus just last week, became a priority for the Georgetown staff after Nerlens Noel got a bad haircut in April. 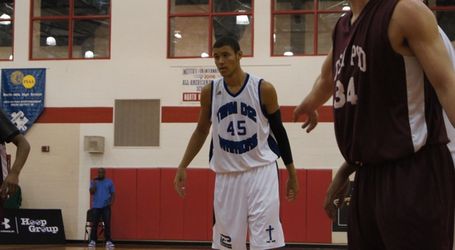 Welcome to Georgetown. via sports.cbsimg.net

According to a report from Adam Zagoria, Hayes toured the Verizon Center during his visit and "really connected with Coach [John] Thompson [III] and the entire staff. My teammates made me feel that I was really a part of the Hoya family. And the real work starts now."

Though Hayes is relatively raw, he has a high ceiling, and under the tutelage of Georgetown's staff he will have all the tools necessary to develop into an excellent big man.

"The kid can run like a deer, has soft hands and has finally embraced his size and gifts," Todd Washington, a Hayes family friend and founder of the Puerto Rico Playmakers, told SNY.tv. "He didn't always take basketball seriously but he is focused and prepared."

"He has a chance to be a pro," Antwan Tennell, Hayes' AAU coach with the Dwight Howard Warriors, told SNY.tv. "He actually grew seven inches in like five months a year and a half ago. He has finally caught up to his size. He moves like a guard. He runs the floor rim-to-rim."

Kudos to JT3 and the staff and welcome Bradley Hayes to the Georgetown family.