A "Fair and Balanced" Look from the Syracuse Perspective: Pete Thamel on the NCAA's Inquiry Into Nerlens Noel's Recruitment

Share All sharing options for: A "Fair and Balanced" Look from the Syracuse Perspective: Pete Thamel on the NCAA's Inquiry Into Nerlens Noel's Recruitment

Remember that time that investigative reporting used to report the results of thorough and unbiased investigations? Yeah, me neither. Take the works of one Pete Thamel, a national college sports reporter for The New York Times and a graduate of Syracuse University. It seems that Thamel is incapable of publishing anything that can ever be deemed fair and balanced.

In March 2012, Thamel penned a piece on the top basketball recruit in the Class of 2012, Nerlens Noel. At the time Noel was deciding between attending Syracuse, Kentucky, Georgetown, North Carolina, and Connecticut. In this 4,500+ word composition, Thamel suggested improprieties surrounding the recruitment of Noel. The piece was extensive and covered all corners. He wrote about how Providence College hired Chris Driscoll, a "handler" that was close to Noel as an assistant coach. He linked Kentucky coach John Calipari to a "low-level agent" vying for Noel's professional business. He even revealed Noel's favorite snack: Cheez-Its; EGAD! Yet when it came to one name, Errol Randolph, Thamel failed to go beyond describing the man as just "an unassigned teacher" at Noel's high school. Odd.

Two months later, after Noel had announced his decision to attend The University of Kentucky, Thamel published another piece. Thamel spoke of supposed NCAA inquiries surrounding the recruitment of Noel. He again went into depth about Chris Driscoll, the former Providence assistant coach that had known Noel in high school. This time, however, Thamel decided to dedicate a few more words to Errol Randolph. In the first article, Randolph was just an "unassigned teacher," whatever the hell that means. Now Randolph was linked to a "sports agency run by the prominent basketball agent Andy Miller." That's it; nothing more on Randolph, who in a matter of months went from an ambiguously-defined teacher to supposed sports runner. Again, odd.

Thamel spent so much time researching the backgrounds of the people surrounding Noel in his first piece, how could he overlook Randolph's affiliations? I mean, the national college sports reporter for The New York Times revealed all possible improprieties surrounding Noel's recruitment, how could he forget a mere Internet search of an "unassigned teacher?"

Here's why: Errol Randolph is a Syracuse fan. That person formerly described as merely an "unassigned teacher" and later a possible affiliate of a major sports agency lists Syracuse University, one of the final suitors for Nerlens Noel, as his one and only favorite sports team. 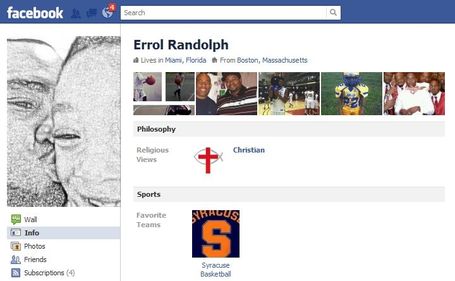 So what I take from this is that Pete Thamel, a national college sports reporter for The New York Times, is either incompetent or biased in his reporting. He is either incapable of writing a complete story or unwilling to draw more negative attention to his alma matter. Either way, he casts a very large doubt over the impartiality of everything he writes.