A horse race is a lot like sex. Lots of build-up, hype and anticipation, and then two minutes later it's over, leaving you possibly pleased but more likely disappointed. With that in mind let's turn to the 2012 Preakness Stakes. The Preakness has become the Block Party of the Triple Crown season. It doesn't have the fashion and celebrity allure of the Kentucky Derby, it doesn't have the cool "Test of a Champion" battle cry of the Belmont. Rather, it has become the perfunctory race that Derby winners have to run in order to get to Belmont, and it seems that the race's organizers at rundown Pimlico have embraced this fate, transforming the event into a drunken orgy and promoting this thing called Kegasus as the event's mascot. 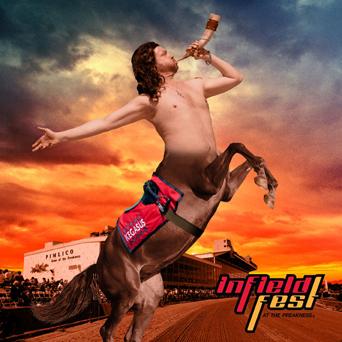 Nonetheless the Preakness is at its heart a horse race, and though not sexy, it is sometimes an opportunity for you to get rich quick so you can purchase shares of Facebook. So let's check out the field and see if we can make some cash, shall we?

Preakness preview and picks after The Jump:

The first rule of thumb for all Preakness wagering is that since historically, there isn't much coin to be won on this race, you have to get creative. Four of the last ten Kentucky Derby winners have won the Preakness and of the other six, three finished second, one third, one flopped and one was the heroic Barbaro, RIP. Why should you listen to my advice on this race after I steered you into a financial abyss in the Derby? That's your call, though out of the 6 horses I was able to narrow the Derby field down to, 4 finished in the top 7 and 5 in the top 10. SO WHAT IF I DIDN'T HAVE THE WINNER, DAMMIT.

1. Tiger Walk - 30/1
Cool name for an exhibit at the National Zoo or a philandering golfer's stroll up a fairway at Augusta, but this is a damn TRIPLE CROWN RACE and this horse simply hasn't shown me that much. Tiger finished 4th in the Wood Memorial, a result that wouldn't be that bad had the winner of the Wood (Gemologist) not flopped in the Derby to finish 16th. Career best Beyer of 90 and making his first start at Pimlico.
Verdict: TOSS.

2. Teeth Of The Dog - 15/1
Another cool name and I suspect much like ‘I'll Have Another' did at the Derby will draw some money from the drunken dolts the occupy the Preakness infield. NO OFFENSE. This horse isn't terrible, has improved speed figures in last three races and grabbed 3rd in the aforementioned Wood Memorial.
Verdict: Of the new shooters, he may have the best chance to grab a piece of the action at the bottom of exotics. 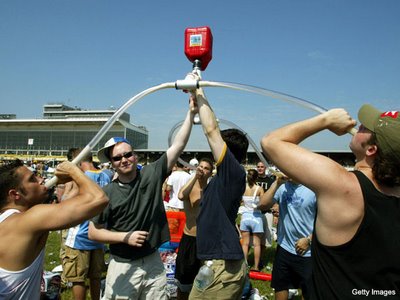 These bros will likely be wagering on Teeth of the Dog.

3. Pretension - 30/1
This horse is coming off a victory on Derby day, except it was in a race called the Canonero II in which there were five freaking horses and the pace was slow as dogshit. HOW DO I KNOW DOGSHIT IS SLOW, YOU ASK?
Verdict: TOSS.

4. Zetterholm - 20/1
Sounding like the name of a Nazi officer, Zetterholm has won his last three races but only has a career best Beyer of 85 and I don't think will like that he is being asked to take on the greater distance than he is used to. "Vy you askeeng me to run zis distince you asshole trainer? I vill run one mile and you vill like eet! Germany has declared war on the Jones boys."
Verdict: TOSS.

5. Went The Day Well - 6/1
Lost in the great run by Bodemeister and great final kick by I'll Have Another is WTDW's run in the Derby, which earned him a 97 Beyer in the come from behind effort to grab 4th. Maryland native WTDW has now run consecutive 93+ Beyers and seems to be coming into form. With a smaller field at Pimlico and less muck to run through on his way to the top of the stretch, WTDW could do some damage here. Wouldn't surprise me if Went The Day Well runs a big race here to pull the upset, and I'm hoping he'll have better value than 6-1 at post time.
Verdict: Contender. Include in any trifecta or superfecta wagers.

6. Creative Cause - 6/1
CC went off as a 12-1 shot in the Derby and was one of my picks to possibly win the race, and though he ultimately finished 5th AND FAILED ME he ran a game race as he always does. Last five Beyers are 92, 92, 102, 95 and 97 and there's no reason to think he won't be in the mix coming down the stretch once again. And if he doesn't I will be first in line to purchase Creative Cause Glue next year.
Verdict: Contender. Include in any trifecta or superfecta wagers. 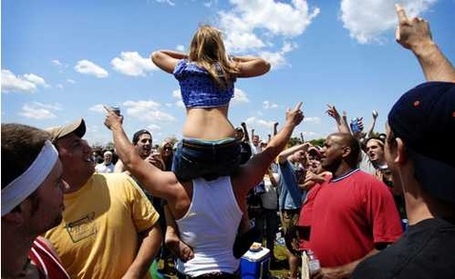 The Preakness infield is a fun place for girls to hang out! via cache.deadspin.com

7. Bodemeister - 8/5
Yeah yeah yeah, we get it. He probably should have won the Derby if his idiot jockey hadn't bolted him to the lead and not let off the gas the entire way around the track and SAPPING HIS WILL TO LIVE down the stretch. Bode set the fastest fractions in Derby history yet couldn't hold on in the final few yards because he was simply out of gas. The good news for Bode here is twofold: First, this race is shorter! And second: this race is shorter! Breaking out of the 7 post, Bode will have no trouble at all dictating what race he wants to run, and being that this is a more manageable field distinctly lacking in any speed that will force him to gun it to the lead from the outset, I suspect Bode to be right there at the top of the stretch with plenty in reserve coming for home. This race might be a replay of the Arkansas Derby where Bode led the field at the top of the stretch and then kicked it into high gear to dominate by 9 lengths. Then again, he might have nothing left after the two monster races in Arkansas and Kentucky and coming off the quick two week layoff. In any case, expect to see Bob Baffert's face and majestic white mane a lot on television tomorrow.
Verdict: Contender. Include at top of wagers.

8. Daddy Nose Best - 12/1
I was suckered into dropping money on this guy in the Derby after his relatively impressive run to win the Sunland Derby and reports that he had been practicing well at Churchill. Despite the 20 horse shitshow that is the 1st leg of the Triple Crown, DNB had a nice trip through the mess and was in a great position to make a move. Then alas, he never fired and finished 10th.
Verdict: Giving him one more chance because I am an idiot and will include in exotics.

9. I'll Have Another - 5/2
Excellent post position for the Derby champ, who completely blew my battle-tested theory of ‘tossing the Santa Anita Derby champion from Kentucky Derby consideration' out of the water. IHA will be gunning for the second leg of the crown from the 9 post, with Bode on his inside. This will again allow IHA to stalk the pace and make his move late, with the big question being whether it will be enough to catch Bode. My guess is no, but I also guessed that Nerlens Noel had a damn "G" shaved into the back of his head.
Verdict: Duh.

10. Optimizer - 30/1
No truth to the rumor that Optimizer will be starring in next summer's blockbuster Transformers sequel as the horse who has no business running in these Triple Crown races and gets blown up with a laser by a Decepticon. Also no truth to the rumor that Optimizer is the horse that took Fab Melo's exams for him at Syracuse. That horse was named Laurie Fine. Also no truth to the rumor in that last comment, because the last thing I need is a defamation suit thrown at THE GLOBAL PHENOMENON, even though by contractual agreement I believe that would be SB Nation's problem and not mine. Also, SB Nation apparently owns all of our Casual content and the rights to casualhoya.com. I will sign anything.
Verdict: TOSS.

11. Cozzetti - 30/1
Cozzetti was one of my favorite characters on ‘The Wire', though I always thought he would return to his philandering ways once he was elected Mayor of Baltimore. It's weird seeing him now in 'Game of Thrones'. If you're keeping score at home, that's now two ‘philandering' references in this opus, which is par for the course for any casual Preakness preview.
Verdict: TOSS.

OK, so where are we.

6 horses! One too many for my liking to play around with in the Preakness, so I'm going to bounce the 8 horse Daddy Nose Best because I don't think his closing style will play well at Pimlico and I'd rather take a chance on a pony with better value.

Now we're down to my 5 horses and it's time to get creative.

Like the morning line odds reflect, I believe that Bodemeister is the best horse in this field and that I'll Have Another is probably the 2nd best, with Went The Day Well and Creative Cause as 3rd and 4th. With that in mind, here are five wager options for all forms of horse gambling enthusiasts:

Wager #1: $2 on the 5 horse to win bet that will cost $2.
What needs to happen: Went The Day Well has to win for this to be a success. Why place a bet to win on this horse? Of the 5 horses above, WTDW will be the one with the longest odds yet a legitimate chance to win the race. Hopefully he goes off at closer to 10-1 at post time so you can win $20 and pay for a lapdance. Incidentally, I have noticed a disturbing trend lately (rather, I have HEARD a disturbing trend lately) that some places are now charging in excess of $30 for lapdances. Thank you, Obama.

Wager #2: a $2, 7/9/ALL bet that will cost $18.
What needs to happen: Bodemeister wins, I'll Have Another finishes 2nd, Doesn't Matter Who finishes 3rd because you're a winner! Root for a longhsot to finish 3rd to pad your winnings.

Wager #3: a $2, 9/7/ALL bet that will cost $18.
What needs to happen: Same as above, but I'll Have Another wins, Bodemeister finishes 2nd, Doesn't Matter Who finishes 3rd because you're a winner! Root for a longshot to finish 3rd to pad winnings.

Wager #5: a .50 cent, 5-horse superfecta box with 2, 5, 6, 7, 9 that will cost $60 to go for the superfecta and earn heroic status among your friends.
What needs to happen: Any combination of Teeth of the Dog, Went The Day Well, Creative Cause, Bodemeister and I'll Have Another in the top 4 and you're a winner!

At the end of the day I expect Bodemeister to win this race but will be rooting for I'll Have Another because it will be awesome a few weeks from now to see if he can bring home the Triple Crown at Belmont, especially since I will be betting the farm and acquiring other farms from now until then with which I will then also bet against I'll Have Another in that race.

Below please see this intructional video on how to make a Black Eyes Susan, the official drink of the Preakness Stakes, which just might be the best tip in this entire piece of nonsense you just read.

Remember, wager how you wish but remember to wager, because life without gambling on ponies is a life not worth living.