Share All sharing options for: Syracuse, Not Georgetown, To Play San Diego State on Midway Carrier

Remember just last week when we were told that Georgetown would play San Diego State on the USS Midway to kick off next season? Well, it appears we have been replaced by none other than...wait for it... the Syracuse Orange! 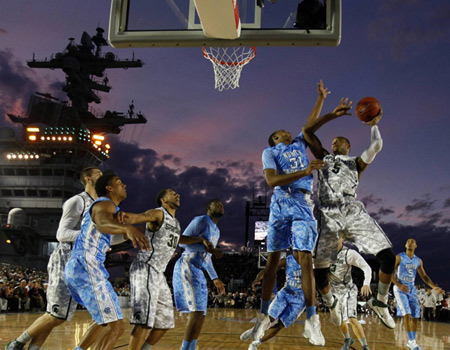 According to this report:

Several sources close to the game's organizers confirmed the Orange, which spent part of this past season ranked No. 1, will face SDSU on Nov. 9 in the Battle of the Midway on the USS Midway Museum. A formal announcement is expected later Tuesday.


A different Big East school, Georgetown, was initially invited to play SDSU, but the Hoyas could not get out of a previous engagement over the same weekend. Instead, they got an even bigger name, and one that almost never plays on the West Coast.