Sleeping with the Enemy: The Bearcats of Cincinnati

Share All sharing options for: Sleeping with the Enemy: The Bearcats of Cincinnati

The Hoyas crushed the souls of Pitt Panther fans yesterday to advance to the Quarterfinals of the Big East Tournament today against the Cincinnati Bearcats. As #RevengeTour2K12 makes its second stop at Madison Square Garden, we here at THE GLOBAL PHENOMENON are bringing you everything you need to know about Georgetown's next opponent. Special thanks again to Down the Drive, the bestest Bearcats blog out there, for providing answers to our hard-hitting questions. This Gates Ale is for you. 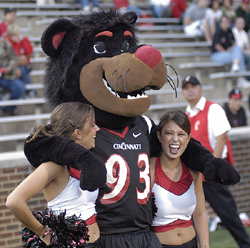 Has this team exceeded your wildest expectations? I assume after the brawl with Xavier, your expectations had to be pretty low for the rest of the season.

As you have noted the exceeding expectations is dependent largely by what point in time the expectations start from. If from the start the of the year probably not. If told on October 20th that UC would get the double bye in the Big East tournament win the most conference games since entering the conference and get 20 wins again I would say that matched expectations exactly.

Based on what I was feeling about this team and this season starting December 11th than absolutely. The way this team responded after the Xavier game has exceeded everyone's expectations. How could they not.

More fun with Cincy after The Jump:

Speaking of the brawl, I don't think Mick Cronin has received enough credit for how well he navigated that disaster and coached through it. Why do you think he didn't get much love for Big East Coach of the Year?

The main reason is that coach of the year voting on the conference level is based more on year to year improvement than from point A to point B in a given season. Let me just say that I think Heath is clearly the rightful winner of COY. That being said what this team has done since the Xavier game is truly remarkable. Cincinnati got every meaningful win this year after the Xavier game, nothing before that. At the same time the team across town melted down under the pressure. The way Cronin handled a terrible situation has gone overlooked. It was talked about for a month afterward. After that everyone sort of forgot about it.

How far do you think Cincinnati will go in the NCAA Tournament? If they are to lose in the first round, would you consider the season a disappointment?

This team has the potential to make a sweet 16 run, elite 8 with the right draw. There are two things in UC's favor for making a run 1) the Bearcats just don't turn the ball over. At all. In march madness games are decided turned on errors as often as good play. Being a team that simply doesn't make those mistakes is an advantage. 2) UC is filled with streaky shooters like Sean Kilpatrick. Dion Dixon, Cashmere Wright and JaQuon Parker. If two or three of those guys get rolling at the same time this team can bury opponents.

Who do you think will win it all on Saturday night? Who are you most scared of playing of the teams left in the tournament?

Syracuse and Syracuse. I think they will win the BET because that team just seems like they can't lose. They have been in so many tight games and always seem to have answers. And they are a terrible matchup for UC.

Kentucky, Syracuse, Kansas and North Carolina are the four best teams as I type this. No idea if they all get there. I do think that Kentucky will win it though. Anthony Davis is the best freshman to come onto the scene since Kevin Durant IMO. And unlike that Durant team in Texas Davis has help. Not a true darkhorse for big followers of the sport but Witchita State is going to stun all the casual fans who turn in for the tournament alone. The other Big East team I will be rooting for is South Florida. They've had a rough life. It's time for some good news. My go to answer for flaming out is always Pitt, but that's off the table so probably West Virginia then.

How the heck did Yancy Gates not even get an Honorable Mention honor on the All Big East teams? Do you think it was fallout from the Right Cross Heard Round The World?

The punch had something to do with it for sure. But it wasn't a case of people being anti Yancy deliberately as much as the punch obscuring the fact that this was the season where Gates finally played to his potential for long stretches rather than showing week long flashes of said potential before regressing to the mean of half assed effort and inconsistency.

Outside of Dion Dixon, Sean Kilpatrick, and Gates, who else should Hoya faithful be worried about tomorrow?

Cashmere Wright. For a while there a zombie was impersonating Cash in the middle of the season. A zombie who replaced the steady, consistent and good decision making Cash with a version who liked taking 26 foot jump shot on 1-2 fast breaks and trying to throw 20 bounce passes through traffic because, you know, it would look frickin sweet if that worked. Sometime after the first Marquette game good Cash killed Zombie Cash. And it's for the better, but it's a zombie movie. He's always out there, lurking, and you never know when he can come back.

Admit it, that chili on spaghetti thing you guys do out there is silly.

Preaching to the choir. Fun story one of the things you should never do while drunk at a house party in Cincinnati is to proclaim, loudly, that Skyline Chili is worse than Bin Laden. Those aren't exactly fighting words. But will result in several encounters with equally drunk people yelling into your face about how effing stupid you are. It's really not a great time. Also don't go to house parties in Clifton should the opportunity be presented to you in the future. No good can come from that. 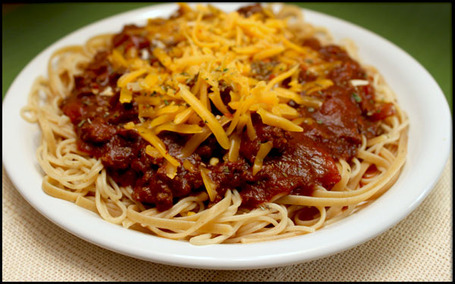 How do you see tomorrow playing out? What's the final score? Do you know that you are our next victims in the #RevengeTour2K12?

The homer in me says UC will win. The realist knows that its the Big East tournament and weird things tend to happen. Oh and I hate revenge tours. The Bearcats were prime performers in everyone's revenge tour during the 2010 Football season. It was no fun.